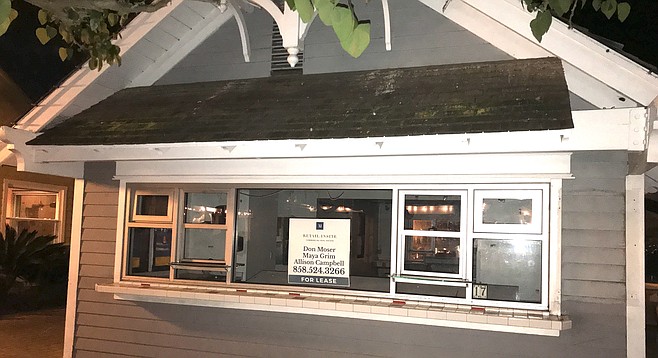 Pat and her two children noted the closure of Seaport Cookie Company at Seaport Village. “I cannot believe it’s closed,” she said, “and what happened with all of these other shops?”

Pat’s been visiting Seaport Village with her grandparents and parents since she was born in 1983, three to four years after the downtown waterfront village opened.

“There’s only four stores left [including us] in the east side,” said an employee of Seaport Island Fashion, “they (the cookie store owners) didn’t want to pay the 30 percent rent increase — they also owned the business in front.” She was referring to Village Café, where Pat once sipped their espressos while their children ran around the gazebo in the middle of the plaza.

“It’s not the same,” Pat said, “the signs on the storefront windows make this place look unwelcoming.”

When I visited the East Plaza portion of Seaport Village on Father’s Day, I counted about 16 storefronts with “for lease” signs on the windows.

I asked the security guard in the plaza when the stores closed; he responded: “It’s almost been a year, but the other side (Central Plaza and West Plaza) is perfectly fine.” 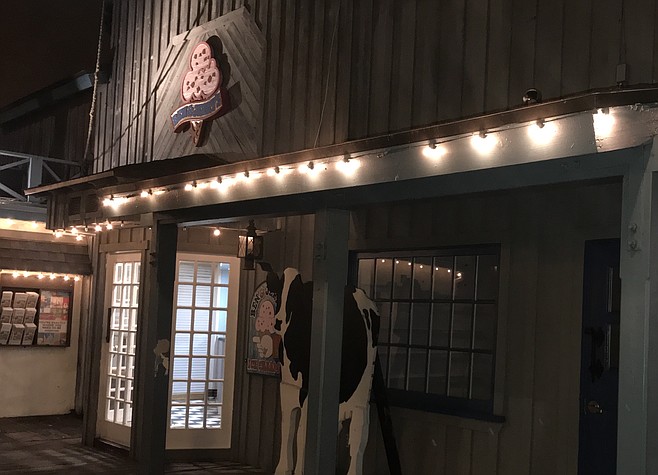 Buster’s Beach House which faces the boardwalk, and is on the East Plaza section of the 14-acre venue was busy. I saw a couple in front taking a selfie.

“The shops are closing because this [younger] generation does not buy souvenirs, like we once did,” commented a jogger that walks the boardwalk and stairs at the neighboring San Diego Convention Center. “All they need for their memories are selfies or ‘snaps’ (Snapchat posts).”

Like Pat, Cindy McAdams has been coming to Seaport Village since the 1980s and 1990s — when she helped her mother and father with the stores they managed in East Plaza; one was Trails West Silver & Leather Company, which they owned with two other partners.

In 2000, McAdams opened Silver Crossing, next to her parents' store; she sold sterling silver jewelry, angels, crosses, inspirational-and-religious gifts, which did well for awhile.

“Then like from 2015 on, it got really tough,” McAdams said, “there were days where you didn’t see ten cars in the parking lot on the east village side. They would come in and take pictures of our merchandise and say: “I’m going to get it somewhere else,” and walk out the door. They wouldn’t even give us a chance to say “Let me give you 10 percent off,” or, “if you buy two: I’ll give you a better price.”

I spoke to two employees working at the Ben and Jerry’s Ice Cream shop.

“Business is a little higher because we are the only ones [left] here,” said the manager, “what helps a lot, is the band.”

Earlier in the day, a live band performed at the gazebo; live music performances are scheduled here every Sunday from 1 to 4 pm until September 15.

(On the west side of the village, by the food court and carousel: the village website says live music is performed every day from 12-4 pm — but is not specific about the itinerary after June.)

I asked the ice cream shop workers if the jogger's and McAdam’s assessment of cell phone and selfie photos link to a decrease in souvenir sales was logical.

“Honestly, yah,” responded the other employee, “because everyone has cell phones now and you take pictures [of where you are at] and that’s it.”

“That’s why a lot of stores say: “Hey, no pictures here,” McAdams continued, “but then people get mad if you don’t want pictures taken and they would just walk out of your store. Some people would be honest with me and tell me: “I wanna take a picture because I wanna go home and make this, or search for it on Etsy, eBay or Amazon”; and I would say: “Actually that’s for sale — here and now.”

In September 2018, McAdams didn’t sign a new lease and packed up her merchandise. “That [time] was the end of the master lease, which was a 40-year lease that Seaport Village got from the port,” she said. “When I left, my rent with triple net was like a few dollars short of $8,000 per month, and when I started out in December of 2000, it was only $4,000.”

In November, mainstream news outlets reported of a proposed $1.6 billion bayfront revamp plan called ‘Seaport San Diego,’ which if approved by port commissioners, will cover 70 acres of land and water, and span from Embarcadero Park to north of the Midway Museum with a “complete teardown and rebuild of Seaport Village.”

In February, per Times of San Diego: “The Port of San Diego announced plans Wednesday (February 13) to invest more than $2 million into improvements for Seaport Village. The Board of Port Commissioners voted unanimously on Tuesday to dedicate $2.2 million for deferred maintenance, new features and site improvements. The port is currently drafting plans to renovate and redevelop roughly 70 acres along the Embarcadero, a section which includes Seaport Village. Port officials expect the plan to be completed by the end of this year.”

McAdams doesn’t believe the $2.2 million in renovation will help. Besides “selfie takers,” she attributed much of her store’s decrease in sales to: “high parking rates that drove locals away, customers’ changed online buying habits, inadequate marketing from property management, and rent increased but sales/traffic did not.”

McAdams and Pat are two of the 11,000-plus followers on the Save Seaport Village Facebook page. Many here are more open to the $2.2 million improvements to Seaport Village than the $1.6 billion dollar revamp proposal — including MK, who wishes the village “would stay forever."

“This is putting a band-aid on way too late,” he commented in part. “Why are you going to invest money in a project that is just going to be torn down in five years. Where will the tenants go then? I am glad to see it get refreshed.”

Design is dated, needs an update for the reasons indicated in the article.

All shopping ares like Seaport Village have to re-event themselves from time-to-time to keep relevant. The rent at popular places are high and it is very hard for many small businesses to make a profit. Malls and strip malls etc. are often too costly for a small business to survive. Many have triple net leases leaving little room for profit.

Seaport Village looked like it got it's plans from Ports O' Call in San Pedro. Last year most of Ports O' Call was closed and demolished for new development. The same reasons; dwindling traffic, lower sales and higher rents.

Retail souvenir stores need to go. Seaport Village should become our front porch, where we go for local art, food and music, while enjoying magnificent bay views. Local restaurants with outdoor cafes, local art on display in galleries, and local musicians playing in bars and on outdoor stages would create an exciting destination for San Diegans and tourists alike to enjoy all the things that make our city great. Wake up Port Commisioners! Here is your chance to give a wonderful gift to our city.

All very valid comments. Good reporting Mike Madriega. The lease increases are just an attempt to get everyone out, to tear down the 70 acre property and build tourist high-rises with tourist commercial, disguised as a waterfront park. Locals will not be welcomed, nor can afford to go there.