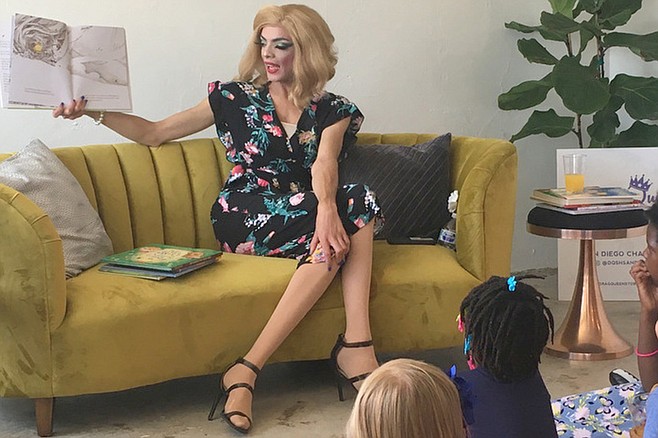 There was no discussion of drag at the Drag Queen Story Hour held in the clean, well-lighted You Belong Here community space last Sunday morning. Charles McGrath, performing as Ms. Oona Upland, noted that he wasn’t crying; it was just that his eyes often watered, “and lashes don’t help.” But beyond that, there was nothing to indicate to the roughly 25 adults and 25 kids in attendance that the event was anything out of the ordinary. Which seemed like the point.

Most of the kids looked to be between one and five; they sat on rugs laid out on the concrete floor while parents occupied the seats on the perimeter. After welcoming the crowd to the event, “a big deal for San Diego,” Alex Ott of Chrome City Creative offered mimosas and water to grown-ups while kids snacked on pastries. 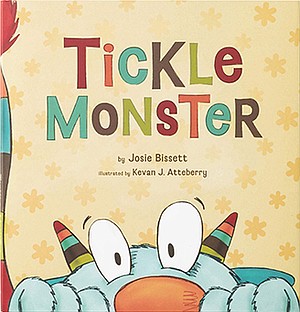 Upland began with Kobi Yamada’s What Do You Do With an Idea? The ultimate answer: change the world — despite the world’s resistance. “Oooooh,” murmured the adults, encouraging admiration. Josh Funk’s Sir Pancake and Lady French Toast followed: the two friends competed for the last drop of syrup in the fridge, only to have Baron Von Waffle snatch it while they squabbled. Peter H. Reynolds’ Say Something urged kids to do just that, e.g., “If you see an injustice; say something peacefully and inspire others to do the same.” Nancy Tillman’s I’d Know You Anywhere, My Love assured children of their parents’ love no matter what identity they adopted. “Wild spotted pony? Easy, my sweet. I’d know it was you by the sound of your feet.” Valeri Gorbachev’s Big Little Hippo was frustrated by his smallness. But then he encountered a tiny bug in need of help, and felt big by comparison. So his mother called him Big Little Hippo, and “his new name made him feel just the right size.”

The kids’ attention had begun to splinter after the first story: some were rapt, but many were not. Parents whispered “Shhhhhhh,” and one reminded her daughter, “Pay attention and be respectful.” Upland paused to let the chaos subside, agreed with a child on the importance of “vegetables to be big and strong,” and took votes on which story to read next. Josie Bisett’s Tickle Monster won easily. Arriving from Planet Tickle, it announced to its diminutive host, “I’m a monster, but not the kind you must flee...Tickling, my lovely, is what I do best; are you sure you’re ready for what’s coming next?” It tickled feet, knees, and tummy before declaring, “With big mitts like mine, my talents are obvious; everyone says my tickling is marvelous. But here, let me prove it; holey moley, I’m giddy. The next place to tickle is your underarm pitties!” Once it finished tickling, it declared its love and departed. After the event, several children said it was their favorite.

As I drove away along the Boulevard, I passed the drag queen supper club Lips; at least fifty people were lined up outside to attend its Sunday Gospel Brunch.