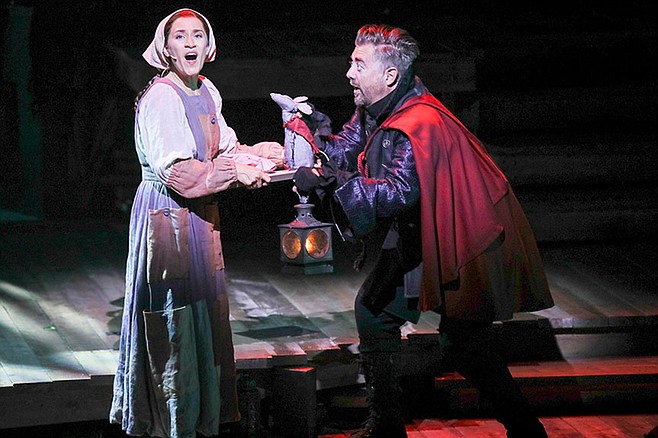 The villain’s journey in The Tale of Despereaux

The big question isn’t how the hero will end up, but how will the villain end up?

The Tale of Despereaux

PigPen Theatre Co., which previously produced The Old Man and the Old Moon at the Old Globe, has now adapted the award-winning children’s novel The Tale of Despereaux into a musical stage production extraordinaire. (The novel had previously been adapted, poorly by all accounts, by Universal Pictures.)

The show has been called “a reimagining of the hero’s journey.” Well, yes and no.

Reimagining is one thing, and reshuffling is another. The hero, Despereaux, is a mouse. There are humans: a king, queen, princess, and cook. The villain is a rat. We’ve had a mouse play the hero before, haven’t we? I’m referring to Mickey Mouse. We’ve also had something of a mouse-princess relationship in Cinderella. Rats are always the villain.

Perhaps I’m being too picky, but it struck me as odd to claim anything is a “reimagining of the hero’s journey.” There is no new hero’s journey. From Harry Potter to Bilbo Baggins to Katniss Everdeen to Despereaux, the journey is the journey — and we love it.

The big question, in my opinion, isn’t how the hero will end up, but how will the villain end up? There are far more options for the villain than for the hero. A well-crafted story, which The Tale of Despereaux is, might have the villain taking something of a parallel anti-hero’s journey: think Harry Potter and Voldemort or Black Panther and Killmonger.

What is the best villain’s conclusion? It most definitely depends on the villain. I, for one, would like to have had Killmonger survive in Black Panther. Voldemort? No. He must be destroyed.

How about the villain in Despereaux? I think the factor to keep in mind here is that this was originally a children’s story. I won’t get into the specifics of Roscuro the villainous rat, but the audience is another factor in determining the anti-hero’s journey. Do we want a villian who is beyond redemption in a children’s story?

Let’s stop trying to reimagine the completely and totally imagined hero’s journey. Long live the villains — or not, in some cases.

The Tale of Despereaux plays at the Old Globe's Donald and Darlene Shiley Stage through August 11.