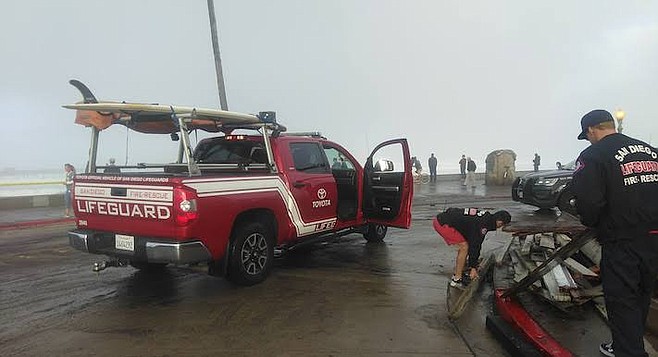 To appear in Blue Water Grille and Raglan Ale House?

Massive tides and high surf significantly damaged the Ocean Beach Pier Thursday night, taking out portions of the railing that washed ashore only to be met by creative locals.

The debris includes small and large pieces of what used to be the pier railing, plus larger items including telephone poles thought to be from south of the pier where the bluffs are collapsing and haphazardly repaired.

Life guards, firefighters, and SDPD were on scene to aid in cleanup efforts, even taking a few slabs of pier wood for themselves.

“We could make a cool bench to put in front of the station,” one of the firefighters said while loading up the truck, “It’s a little piece of history, pretty cool.”

When asked if it was okay for the public to take pier souvenirs, everyone was given the green light. 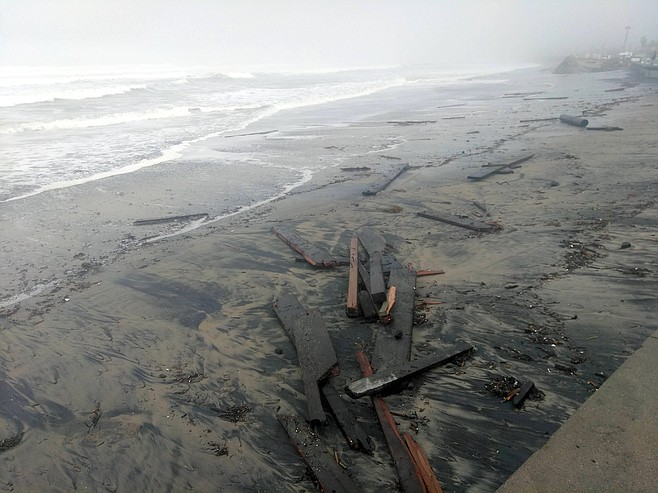 "Don’t go into the surf or on the beach,"

“They are removing a hazard, it’s a great idea, it's helping us out,” one of the firefighters told me. “Don’t hurt yourself while you’re doing it, don’t go into the surf or on the beach but anything that’s up here on the street is free to take, you know, otherwise its just waste and we’re going to have to haul it to the dump.”

Long time resident, Judd Braun, will soon be opening the Blue Water Grille and was excited to nab a few pieces of history, again.

“I’m opening Blue Water soon, and although I don’t know what I’m going to do with it yet, I would love to see it up in the shop,” Braun told me. “I gotta let it dry, then get it off to an artist and see what we can figure out…last time this happened, the major one that ripped off a section of the pier, sometime between ‘82 and ’85 I think it was, I grabbed a bunch of pieces and made planters out of them.” 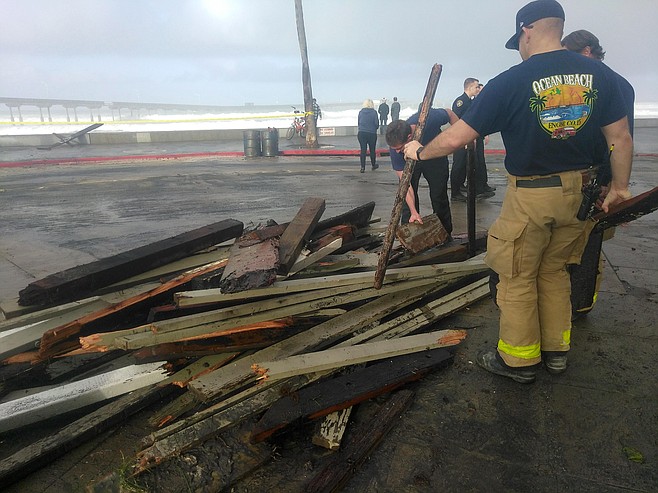 “I’m going to make a really cool shelf out of this.”

Kyle, the general manager of Raglan Public Ale House, nabbed a piece about four feet long. “Not sure yet what we’re going to do, maybe do some kind of contemporary art with it, I’ve got a friend Luca Kong, who does Lichtenberg figures-burning into wood-so with this piece hopefully we can turn it into something cool that is representative of OB.”

“I’m going to make a really cool shelf out of this,” Dusty Zamba explained while showing me a large piece of railing and flat slab. “I’ve made shelves in the past, but not using this (pier wood) before.”

Marshall grabbed a piece, “I just want a piece of history, not sure what I’m going to do with it aside from just have it in my apartment.”

Julie had two large slabs of wood, “This one is going to be donated for the OB Christmas auction, a piece of the pier, and this other one I’m not sure yet.”

Within two hours, most, if not all the wood had been reclaimed, leaving very little for the landfill.

“I just watched two women walking up to Newport with a piece of the pier,” said a nearby stranger, “you gotta love the character of Ocean Beach.” 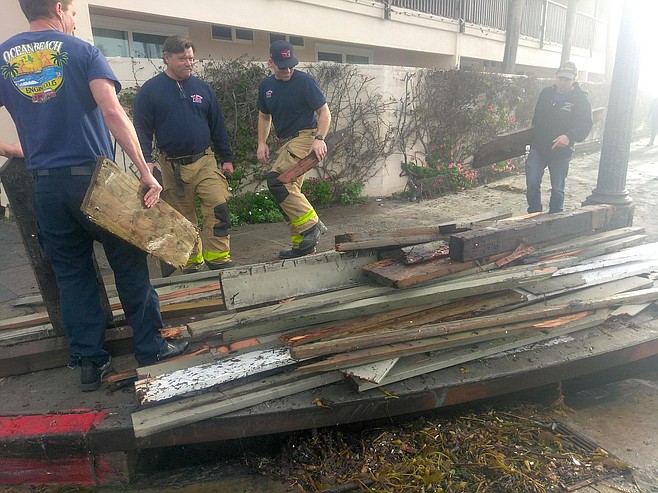 “I just want a piece of history."

"(T)he character of OB" is a bunch of smelly junkies playing the same three songs on guitars that aren't in tune, and the women that love them for their access to dope.

OCEAN BEACH (OB)2006 Ocean Beach is just a drive by for commercial airlines and the San Diego police. Baghdad car patrol. The cops don't even stop to eat in OB. Coffee and donuts while steering and peering at the freaks. "Taxi driver" in black and whites.. No visual police street presents in OB, except, perhaps presents for that same group of “taxi drivers" constantly congregating outside two local stores laden with bottled beer and liquor for sale. Street present are the crusty winos. Cardboard mats, cardboard colored beer bags, cardboard colored clothing, cardboard colored hair, skin, sand and lovers. Fashion by ‘ beersun&wind’. Toothless mouths squirt saliva and alcoholic juiced slang when probing for spare change and romance. The OB library always has more people working behind the counter then public available 1hr computers.Two bus lines the #35 and 923 with brake happy chauffeurs tram the noisy sailors, reading students, silent workers, seniors with their bus pass hanging around their neck and smelly circus freaks in and out of town. The corner of Cable and Newport Ave looks like the greyhounded public transit center of OB. Peoples market is the spiritual center of OB. The juice there is a $1 cup of organic COFFEE made with filtered water, sweetened with amber avocado honey and chalky soymilk. The pier is the wild habitat center of OB. Pelicans perching on the railings for discarded fish heads, whales and dolphins for sightings and the surfers tubing through the pier’s concrete pilings for danger. There are more liquor stores owned by Arabs in Ocean Beach then African Americans. The lone New York Jewish woman rides her 1958 bike with big tires around town, the fenders rattle. The gentile women have trucks or SUVs, arms tattooed from wrist to shoulder, wear flip-flops, wool caps and totes big dogs on chains. If as you kneel and pet; the dog sniffs and likes you, well the gentile ladies pick out and buy themselves flowers at OB's farmer market every Wednesday. The gods blessed Ocean Beach with good air quality, a Mediterranean climate, a wicked riptide and no senior center. Ocean beach has one street (Newport Ave) with bars, big hamburgers, Mexican food and that street leads to the entrance to the wino’s hood: the beach, the fire pits, the pier, the public bathrooms and the cliffs. . and Ocean Beach has one street (Sunset Cliffs) with all its’ community active churches feeding the forgotten and that street leads one out of town. And Ocean Beach has one street (Voltaire) plastered with signs in the store windows that read: "We must cultivate our garden". Voltaire and that street leads to wino free doggie beach.