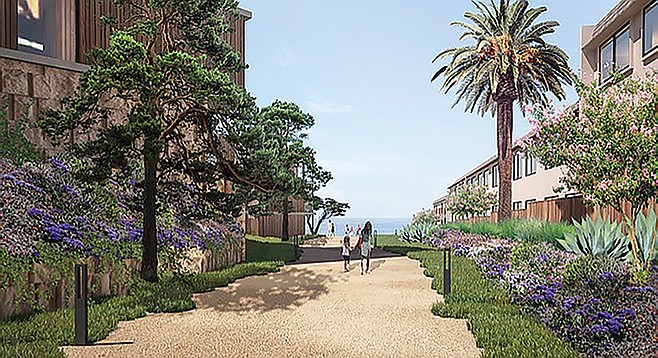 The seaside Del Mar Resort, if built, would be the biggest project ever built in Del Mar. Some are wondering why a project atop Del Mar’s last open coastal bluff is even being considered. Others worry it will set a dangerous precedent thereby making it easier for future developers to push the envelope even further. 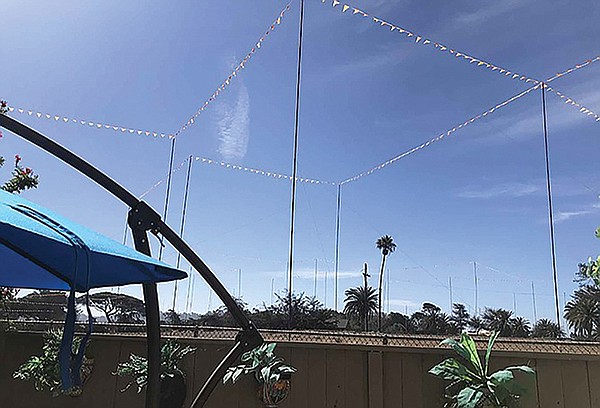 Poles and ribboned strings show this Solana Beach resident how the planned resort will affect his view. 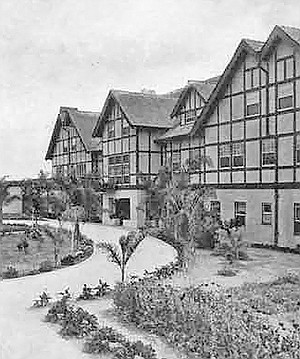 Stratford Inn, once a hotspot for Hollywood stars, then a hangout for vagrants, was demolished in the 1969 and replaced with the L’Auberge in 1989.

“Del Mar’s project, Solana’s headache,” is what one person wrote on a petition opposing the project that has garnered over 2000 signatures. The perception being that Solana Beach will get the downside while Del Mar rakes in the spoils — millions in hotel tax dollars. One Solana Beach resident said that Del Mar would never allow this if things were reversed. 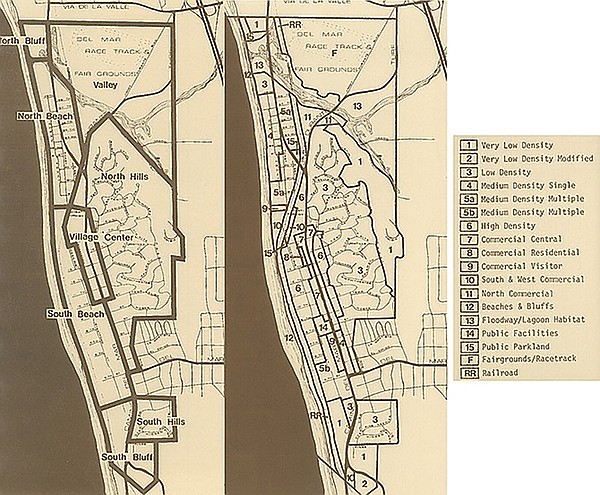 Official Del Mar city maps show the North Bluff, on which developers want to place a 251-room, 76-residence resort, marked with a 1 for “Very Low Density.”

Another pointed out that the only access to the resort will be on Border Avenue in Solana Beach.

The 16.5-acre project area sits perched on what city maps call North Bluff, above Del Mar’s dog beach and bordering Solana Beach. It’s near the busy intersection of Via De La Valle and Highway 101 within sight of the racetrack. The southern portion of the bluff will remain a 4.5-acre nature preserve.

Zephyr (luxury developer) and Robert Green Company (specializes in upscale hotels) are currently revamping their design based on concerns heard over the past couple years. Primary grumbles are the same as for any other big development: traffic/parking, density, and height/views.

A string of recent bluff collapses in Del Mar (most recently in December) have many concerned about such a large resort being constructed on a fragile coastal bluff. Many voicing concerns reside on that same bluff. A bluff that is fully developed for nearly two miles up Solana Beach’s coastline.

When flagged poles showing the project’s footprint appeared in August, it was a wakeup call. One Solana Beach resident viewing the poles from his upstairs bedroom window realized, not only that his ocean view was at risk, but he would have to go outside and crane his neck to even catch a glimpse of the sky.

Current plans for the resort include 17 structures, nine of them four stories. Brad Termini, co-founder of Zephyr, touts his luxury projects such as the 14-story Bankers Hill condominium building “The Park” that won an award for poor design in October, 2018. A native of Buffalo, New York, Termini moved to the West Coast in 2003 inspired by watching Baywatch and Beverly Hills 90210 as a kid. Termini also owns an organic cannabis business. He said he plans to leave 70 percent of the bluff as open public space. Regarding concerns about parking and traffic, he said resorts typically have a lower impact than other land uses.

Of more than 700 proposed parking spaces, about 100 are for public parking, 450 for hotel parking (200 for employees), and 150 for the villas. For locals, plans for three stories of underground parking in the bluff is of more concern than number of spaces.

A Solana Beach resident on Marsolan Avenue, in an email to the city, said she is worried resort employees will park in her neighborhood. Ever since the Brigantine restaurant started charging for parking, their employees have parked on her street. Another resident is concerned about rideshare drivers.

Resort employees will be offered public transit passes but according to Apartments.com, the closest areas with rentals below $1400 (Escondido and Clairemont) take 1½ hours or more and drop workers up to a mile from the resort.

Termini said one benefit of his project is “a possible revenue sharing agreement with the city” to replenish sand. Pumping sand onto the beach quells erosion from coastal bluffs, a primary source of beach sand.

With the “save our bluff” protests against the resort, it’s only fair to turn the spotlight on the hundreds that currently reside along bluffs and shorelines. Managed retreat is one strategy the coastal commission favors to allow beaches to return to their natural state. This means abandoning erosion-threatened land by removing homes and seawalls. No one is thrilled with the prospect of moving their seaside abodes inland, so in October, Del Mar’s city council decided to leave managed retreat off the table for now, a move local environmentalists liken to the the proverbial ostrich burying its head in the sand.

The state requires coastal cities to develop strategies for adapting to rising sea levels, predicted by many to rise 5 inches by 2030, 12 inches by 2050 and more than 3 feet by 2100.

A pro-project website by “a group of Del Mar homeowners, residents, and business owners” call the resort a “once in a lifetime opportunity” that will “finally [give] access to one of the most beautiful views in our own backyard.” The website offers a long list of benefit statements, including how the project will be the “first environmentally sustainable project of its kind.”

This claim has been made before by other developers in the county with plans of purchasing carbon credits from foreign entities. An architect opposing the project objected to Zephyr’s claims about “meeting or exceeding the highest levels of sustainable design” while at the same time promising to meet the lowest levels of sustainability ratings.

Of 14 original supporters listed on the website in early-November, about half were Facebook friends with Termini’s wife and the majority lived more than a mile from the project site. A few supporters had businesses nearby, including the owner of Red Tracton’s Steakhouse across from the racetrack. Only two supporters appeared to reside in Del Mar, including Jim Watkins, the developer of Del Mar’s L’Auberge hotel that Termini holds up as shining example of what his resort could be.

L’Auberge opened in 1989 where once stood the Tudor-style Stratford Inn. Opened circa 1910, it was a playground for the rich and famous (renamed Hotel Del Mar in 1926). The first Bing Crosby Stakes in the mid-1940s turned it into a hotspot for Hollywood stars. By 1963, it was a hotspot for cobwebs and vagrants before being demolished in 1969, about the time Oklahoma-native Watkins moved to Del Mar.

Though Zephyr holds up the L’Auberge as a reason why his development should exist, there are important differences. L’Auberge is in a commercial area and has far fewer rooms (120) and timeshare units (12). L’Auberge was originally rejected by voters in 1987. Voters only got on board once the number of units were reduced. Putting Zephyr’s project to a public vote is what many want, though Solana Beach would be left out of the count.

Watkins sold L’Auberge at a loss to Lowe Enterprises in 1994. This hits on a concern some have that an economic downturn could turn Zephyr’s project into “a money pit that the developer may not finish” leaving “a half-built eyesore.”

A few weeks ago, 60 new names were added to the project supporter’s website. Of those, 75 percent reside in Rancho Santa Fe or take regular part in Rancho Santa Fe society, have private golf memberships in town, or do business there.

The majority of supporters listed on the website aren’t in the geographical crosshairs of the project. Many supporters could be seen as benefitting from the proposed development ­— brokers and those that work on behalf of developers or hotels, and people wealthy enough to afford the planned villas. Four supporters own Solana Beach restaurants/bars. Others that could likely afford one of those villas include wealth management advisors, a golf industry chief executive, a retired SDG&E chief executive, and a plastic surgeon.

Of the 22 new names added in mid-December 2018, at least half have ties to Rancho Santa Fe, such as Jay Flatley who can be seen in a local paper in 2016 with then presidential candidate Donald Trump at an intimate multi-million dollar fundraiser organized by Doug Manchester, the hotelier and former San Diego Union-Tribune owner.

The creators of both the supporters’ and developer’s websites paid GoDaddy to keep their identities private.

Early renderings suggest the resort will be set significantly further back from the bluff’s edge than adjacent residences. Mark Johnsson, a coastal commission geologist that authored a primer on coastal bluff erosion, explained “The goal is to assure that by the time the bluff retreats sufficiently to threaten the development, the structures themselves are obsolete.

Matt Bator, city planner, said perceived impacts will be addressed in the environmental impact report anticipated out in early 2019. It’s being prepared by the city’s consultant based on information provided by the developer’s consultant.

Bator said anything on the bluff in excess of 14 feet isn’t allowed to impact the scenic view sheds and open space appearance. The developer wants to build to 46 feet, 20 feet higher than zoning allows.

Some locals have expressed concerns about hundreds of outsiders crowding dog beach if the resort is built. That won’t play well against coastal commission dogma that says beaches belong to everyone, not just those that can afford to live near them.

Termini, a dog-lover, said dogs will definitely be allowed at the resort.

The project is anticipated to go before the design review board and planning commission in the spring and the city council and coastal commission in the summer. The developer hopes to break ground in 2020 and open the resort in 2022.

Ya know... have you been to the place and seen it? Even in the state it's currently in, its amazing. Truly, it probably has as much history to San Diego as Balboa Park.
If I had any say so I'd restore it to it's original embodyment and make the place a heritage park,. Don't let developers anywhere near. All they want to do is trash our history and make another few million. It's really sick....sadly always about money, history usually looses...