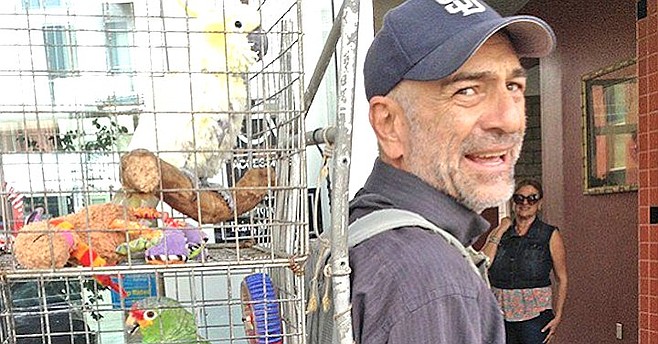 "Get out of here with your dirty clothes"

Victor Vasquez holds his head in his hands. His white parakeet Ginger sits on his shoulder. Coocooberry, his 25-year-old red-lored green Amazon parrot, sits atop his cage, looking at Vasquez, unblinking, silent.

I met Vasquez over a year ago in happier circumstances. He was already famous locally for his daily walks with his three parrots in cages stacked on his back. He would sortie from his low-income apartment on Market Street to take them anywhere from the Central Library to Balboa Park. Recently, at the library’s courtyard, two people, a man and a woman, beat and kicked Vasquez to the ground. He had his birds with him. When he fell, they panicked. Sydney, his 30-year-old white medium sulphur-crested cockatoo from Papua-New Guinea, escaped from his cage, flew under the Blue Line trolley, and was crushed.

It has been a bad month for Vasquez, who is HIV positive and suffers from PTSD (since a "head-crushing" 1989 encounter with police at a political rally in San Francisco). He recently received notice to quit his apartment within sixty days. He got drunk, went downstairs to the Island Village lobby, and says he was beaten by the security guard.

He was able to get security video of the incident. “I went to the Central Library to use their internet, to disseminate this video of the beating. And also, I used to take my birds to the library courtyard. On that day – I recorded it – the security guard came and told me to leave, because of the birds. And I said ‘Why? You’ve never done that before.’”

“And this kid said ‘Get out of here with your dirty clothes.’ And as I was leaving I stopped and I said ‘Mind your own business.’ And he acted like he was going to get up and beat me. I called 911. And he came and he beat me. Sydney flew off the carrier, and onto the fence, next to the trolley. And the last time I saw him was right before they knocked me down again. He was hitting me, and his girlfriend kicked me in the head. And I got up and I looked, and Sydney was gone. And a woman said Sydney was run over. And I went and I found him…under the trolley wheels. I scooped him up, and I chased the kid. He saw me and I saw him. And I said, ‘Look what you did to my bird!’

“Ginger flew into a tree and was screaming, I was able to get him, but Sydney was pulverized. I can’t get the image out of my mind of him being killed.”

He bends over, sobbing.

“The day before he died, I told him, I said, ‘You’re the reason I wake up each morning.’ Sydney was the most loving creature I have ever met. He had so much life, and heart. People don’t even know. Intelligence is not always based on being able to build a car or go to the moon. Sometimes it’s based on your capacity for compassion and love. He’d like it when I sang really hokey songs like ‘You are my sunshine,’ and ‘You are so beautiful to me.’ And I know that’s what I have to hold on to, the way he looked at life.”

Victor Vasquez is still seeking to identify his attackers.

Sorry story...all the blessings and goodness to the bird and Victor. We are better than this!

I'm not saying he should have been beaten, but I don't think we've got the whole story here. He says he was beaten up in 1989. Then he says he was beaten up by guard at Island Village, which is evicting him (ever see the people there? You have to be a real piece of work to get evicted). Then he gets beaten up again while trying to take action about being beaten. This guy's a magnet for beatings, I reckon, and used his birds as a shield -- didn't work this time.