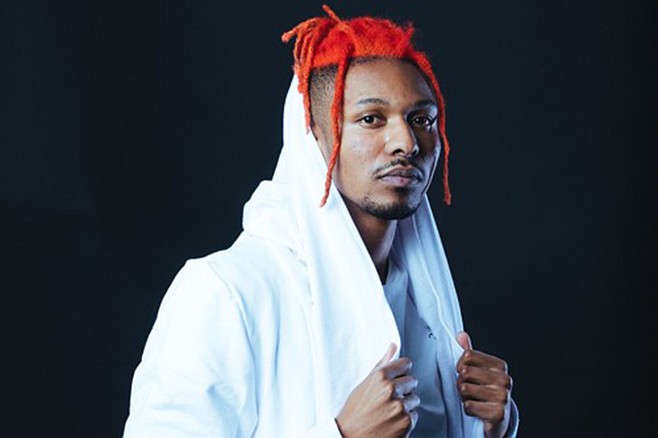 On December 11, I called BASSMNT to see if they’d permit our preschooler to access their club in two weeks; nobody answered and I left a message.

Our preschooler and his playground homies love SAYMYNAME, also known as the Godfather of Hardtrap — who will perform at the downtown club on December 28. The Los Angeles-based electronic dance music DJ and producer created and posted "Barney Theme Song (SAYMYNAME’s Bacon Trap Remix)" on the SoundCloud app in 2013. It’s his fusion of the purple dinosaur’s anthem, backed with a thumpin’-trap bassline.

“When I had the idea to remix the Barney theme song,” SAYMYNAME said in a interview with Insomniac, “I doubted it a few times during the process of making it. I thought that remixing a child’s song like Barney could harm my career, but I just went in YOLO Mode (yes I said YOLO) and did it. It is my most popular song, surprisingly.”

In 2006, Dayvid Lundie-Sherman DJed his first gig for his 9th grade classmates. Six years later, under his SAYMYNAME moniker, he’s said to have created HARDTRAP when he combined the hi-hats and southern twanged-Roland TR-808-esque, half time-rhythms from the trap genre with the rattly bass and faster buildups of hardstyle, which is a hybrid of techno and hardcore.

“I love the sound of deep hardstyle bass drums that go Baawm Baawm Baawm Baawm,” he said in the Insomniac interview. “The Headhunterz song, 'Just Say My Name,' inspired [my] name. I loved the aggression in the song and the monologue in the break. It is demanding, like my music.”

Earning the title “godfather” of the sub genre of electronica was not a simple push of a button for the 6’5” DJ that bobs his red-colored dreadlocks on stage. He graduated from Chapman University and worked at Guitar Center while simultaneously preparing to win the 2013 Discovery Project competition, that allowed him to play onstage at various electronic music festivals in the U.S.

“One of the biggest challenges I’ve faced since the founding [of HARDTRAP] in 2012, was getting people to be open minded to the genre,” he said in an interview with RelentlessBeats.com. “I faced a lot of backlash because the sound was too “harsh” or didn’t “fit,” in the scene. Some even thought that hardstyle and trap music were better left separated. My fans really helped change that though and spread HARDTRAP all over the world.”

SAYMYNAME’s remixing of his screeching, layered kicks, sine sweeps and saw waves — were approved by his electronica brethren, including Zatox, Carnage, Milo & Otis and The Chainsmokers; their collabs are shared on the SoundCloud app, and part of their repertoires.

Instead of cuddling with Barney and Friends-toys in the 90s, the then five-year-old Dayvid learned how to scratch and blend beats on his pop’s DJ turntables that were passed onto him.

Nowadays, his parents are the first to proof-listen to his newly produced-bangers. “It is funny, though,” he said, “when I see them at some shows in the middle of the crowd with a bunch of raging teenagers and young adults.”

As of print time, BASSMNT hadn’t called me back to approve entrance to my preschooler and his posse, to sing the “ABC’s and 123’s” with SAYMYNAME that Saturday night — which is okay, because it’s past his sleepy time. The concert begins at 9:30 pm, and tickets start at $10.