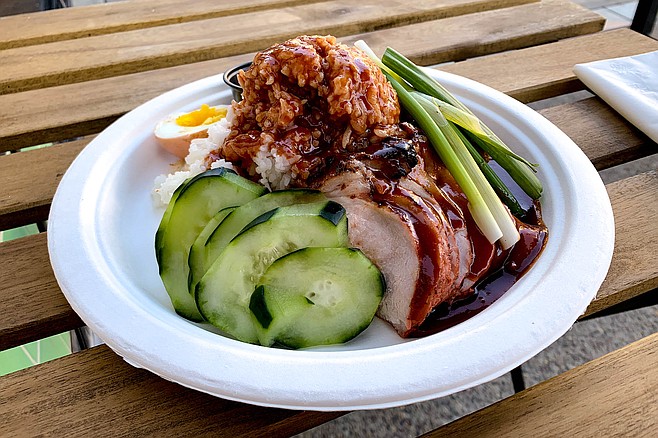 Angkorian Pikestaff serves one dish per day in East Village

With her weekday lunch pop up, a local chef explores the world of Asian cuisine

A thousand years ago, when Cambodia’s Angkor empire extended across what is now Vietnam, Laos, and Thailand, its infantry brandished long, piked staffs, sometimes from the back of an elephant. That’s the reference being made by a new, pop-up lunch eatery in East Village, with the name Angkorian Pikestaff.

With it, local chef Socheath Sun makes a nod to her Cambodian heritage. Three decades ago, her parents fled the Khmer Rouge, and wound up raising a family here. Sun’s been cooking professionally the past ten years or so, most notably for Tiger! Tiger!, but perceiving the relative dearth of Cambodian restaurants in San Diego, she started looking for a low-risk way to start her own. 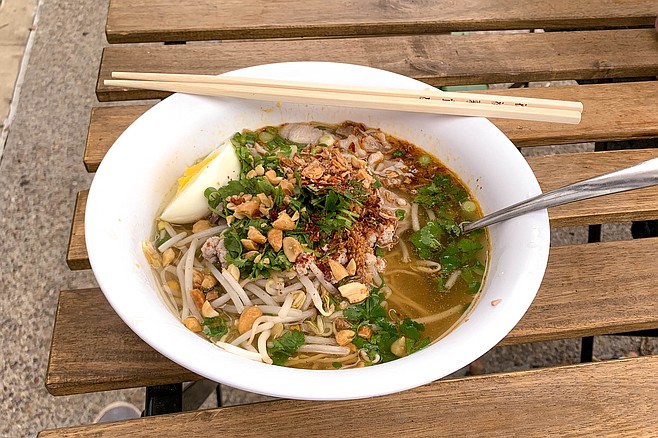 So from 11 am til 2 pm on weekdays, she rents time to cook and serve in a commissary kitchen at 734 Park Boulevard, just across the trolley tracks from the New School of Architecture and Design, in what was formerly a couple short-lived cafes.

And here’s where it really gets interesting: Angkorian Pikestaff only serves one menu item at a time, changing it up daily. Every two weeks, Sun posts a new biweekly menu to Instagram, laying out the dishes served Monday through Friday. For example, the Monday dish on one recent menu was somlar machu kreung, a Cambodian beef sour soup, made with lemongrass curry, pork jerky, and morning glory, a.k.a. water spinach ($12.50). Tuesday, she made mee kola, another Cambodian dish topping rice noodles with bean sprouts, roasted peanuts, ground dried shrimp, and sweet soy sauce ($11.95). 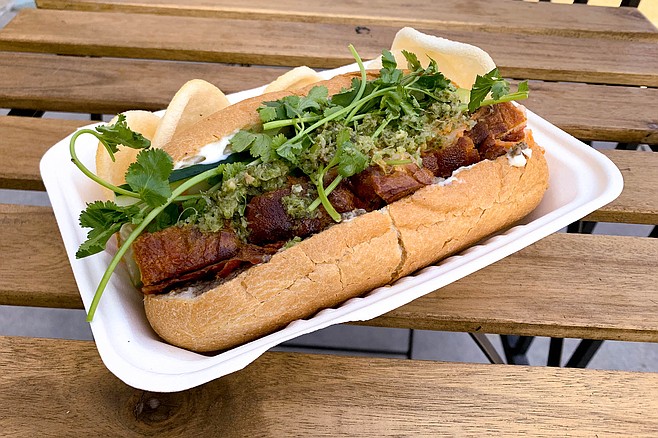 Each dish so far has ranged in price from 11 to 13 bucks, and while the aforementioned meals may sound interesting and wonderful, don’t expect to see them on the current biweekly menu: a couple months in, Sun has yet to repeat a dish past its two consecutive weekdays on the menu. At some point, she will likely revisit a few of the most successful dishes, perhaps as part of a “bangers week”, returning customer favorites.

And because Sun runs the small operation herself, both cooking and serving, she enjoys plenty of feedback from those customers, including a pair of repeat guests who implore her to bring back a brisket bánh mì. 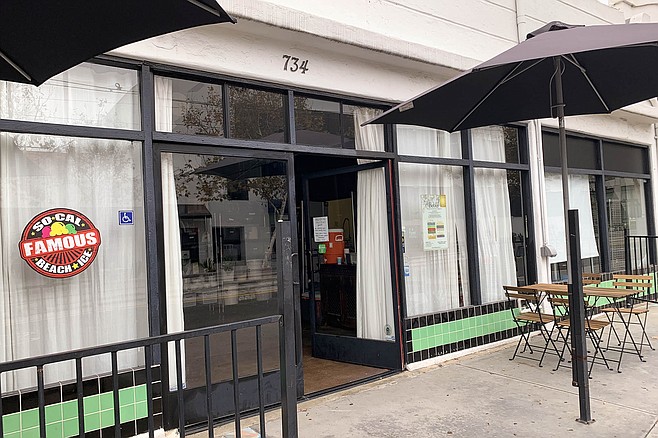 Tables outside the commissary where Angkorian Pikestaff serves lunch on weekdays

Because, not all the dishes are Cambodian in origin, Sun is developing many of them on the fly, calling upon her own experiences as a chef and a customer, probing pan-Asian influences and traditions, yielding items as a ramen-like tom yum soup, with egg noodles, both char siu and ground pork, and shrimp wontons in a pork broth with, among other things, crushed peanuts.

Since she prepares a different dish each day, Sun has to estimate how many meals she might sell, and as word has started to spread about Angkorian Pikestaff, she sometimes runs out of food well ahead of her planned 2 pm closing time: why I missed out on a Japanese katsu curry at 1 pm on a Wednesday. In response to this, I find myself showing up earlier in the day, and more frequently. Often, I encounter other members of local food and drink media, who’ve become regulars.

Because seating is limited to a handful of tables on the patio outside the kitchen, a few customers who live or work nearby take their dishes to go. Those who dine in tend to speak to one another across tables, mostly about how good everything has been, and which dishes on the menu we might return to try the following week. So even as I sat there enjoying Monday’s khao moo dang, sweet, roasted pork loin served with rice, cucumber, and a “BBQ gravy” flavored with five spices and bean sauce, I’m already thinking about returning Wednesday for the nasi lemak ayam, Indonesian fried chicken, and Friday for the Cambodian kuy teav cha: stir-fried curry noodles.

At some point, Sun may find enough success with Angkorian Pikestaff to grow into a more conventional restaurant, and judging by the first few weeks of this, it will be great.