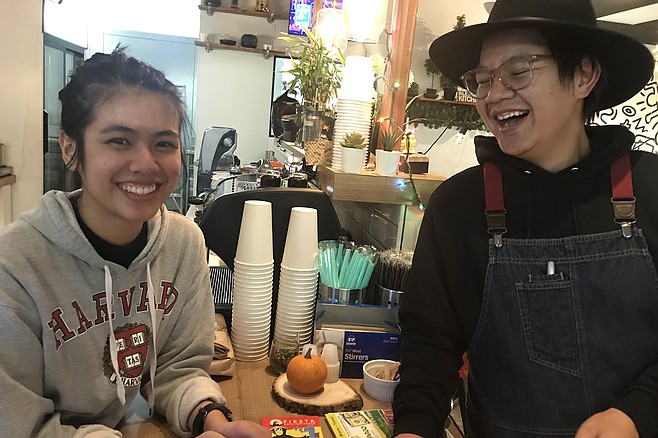 Everyone around me is sucking boba balls

I sip my Kyoto Summer.

I look down. A steamed burger?

It comes out blanched, like a ghostly version of America’s favorite sandwich, but stuffed with a golden-crumbed chicken slab, Swiss cheese, and kimchi, and bleeding a scarlet sauce.

Not your mama’s burger. But hey, we’re not in Kansas any more. This is deepest National City, where Manila-based eateries like Jollibees and Tita’s Kitchenette reign. 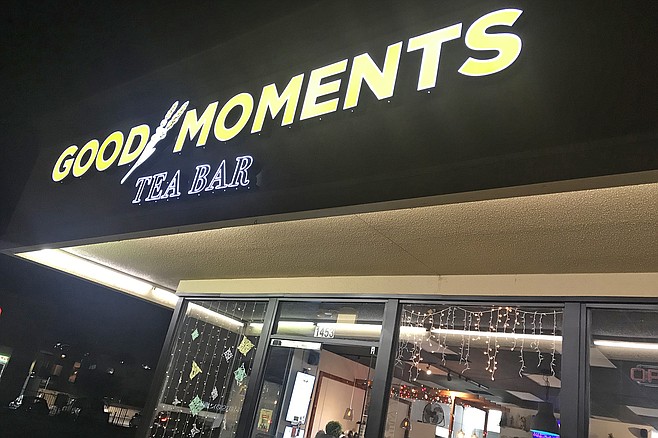 Is this the next Starbucks?

Fact is, I was just looking for a coffee as I walked past Plaza Square. Saw on their big sign something called “Good Moments Tea Bar.” Liked the thought. Saw this guy inside with black shirt and fedora who was obviously in charge and gave the place a cool, poetic atmosphere.

So I get inside and see it’s basically a boba tea joint. Lots of kids sitting round laptopping. The back wall is a pretty impressive Keith Haring mural. (Remember him? He’s the pop artist who took graffiti mainstream.)

In the middle of the room, a nice square dark-plank table. Interesting electronic music playing softly. Black acoustic ceiling tiles dampening any clattery dishwork going on. I order a cup of Japanese green tea. Actually it’s what Bernie Ann, the gal at the counter, recommends, because I’m lost in the endless lists of tea possibilities. She passes me this cup of dark tea. “It’s not matcha,” says the guy in the fedora. (Turns out he’s Klin, the Thai-American owner.) “This is hoji-cha. Hoji means roasted in Japanese, and cha means tea.”

I like having tea with no sugar, no milk, when I eat Asian food. So I try it here. But it’s tough, on its own. This is strong green tea. Besides, I really want something to chow down on with it. And there are a bunch of snacks and sandwiches listed on the wall. Hmm. “Stuffed sandwiches” come with ham, sausage, pepperoni; then there are“salmon melts;” spinach and cheese; bacon, egg, and cheese; avocado, bacon, and pepper; each $2.75. (Last two are a dollar more.) And they’ve got savory crepes like “Kalifornia Love” (krab, mayo, avo); “Bangkok Invader” (Pork Sung - fluffy fine-shredded pork - mayo, roasted chili); and “When In Rome,” pepperoni, tomato sauce, mozzarella. They all sound interesting enough. All cost $6.95. 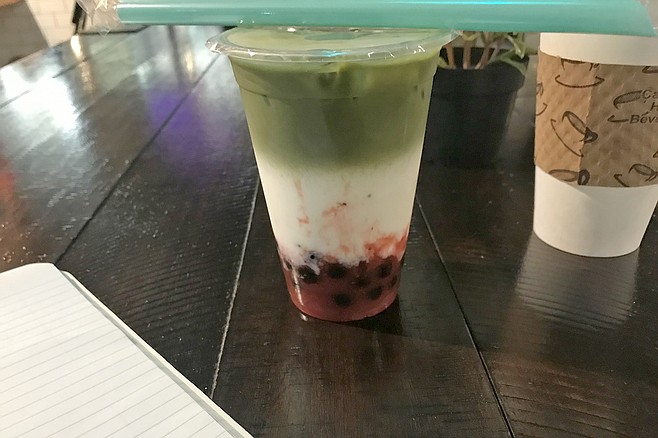 But the two that really catch my attention are the “bunbuns.” Uh, bunbuns? They’re only $5.55 each, so I’m not holding out great expectations for them. But definitely curious, because they look, well, burgerish.

“It’s a form of mayonnaise from Japan, made with rice vinegar, and using egg yolk only, instead of the whole egg,” says Klin. “Crazy popular there. It’s a kind of creamier mayonnaise.” And yes, it’s also named after the Kewpie doll.

The other bunbun is the “Seoul.” Korean-style, natch. Has a crumbed chicken patty, gochujang (which is a slightly hot, sweet, and savory Korean red chili paste), plus chili powder, sticky rice, meju powder (meju? Dried, fermented soy beans), kewpie and kimchi, and a lettuce leaf. 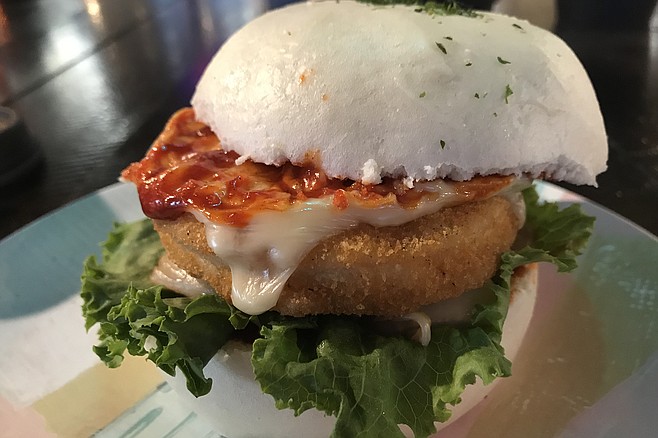 The white stuff is rice, the red stuff is Gochujang

I order one up and head for the table.

Soon enough, Bernie Ann comes out from the kitchen with the neat, burger-shaped sandwich with a very white split bun. “It’s a Chinese steamed dumpling, except there’s no meat inside,” says Klin when I ask him. “My idea was to create something American and Asian. So the chicken or beef is American but nestled among Asian flavors.”

Huh. So it was his idea. Name “bunbun” is his too. Could become the burger of the Asian century! I take my first bite. The flavors leave no doubt: Gochujang and kimchi. That red chili/fermented cabbage thing is big. The chicken patty plays second string to them. The bun has a feathery rice aura. Garlic and ginger are definitely in the mix, and I’m getting that same fermented feel you have in the aftertaste of a lot of beers. The hojicha tea leaves the same aftertaste. It’s like they all evolved from the same family.

Of course, I can’t leave well enough alone. Now I want something sweet, and everyone around me is sucking boba balls through giant straws. The drinks are awesomely colored. 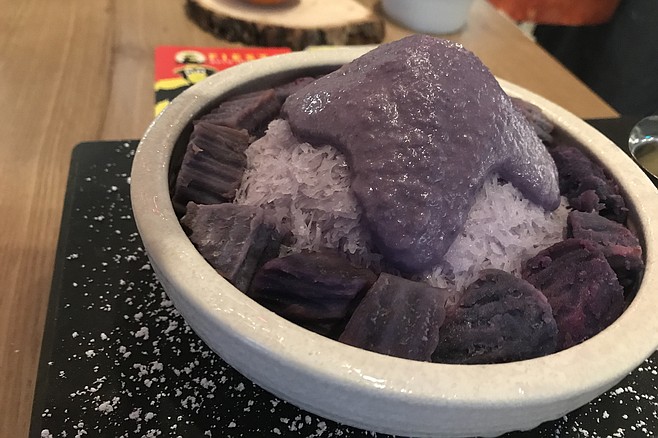 “It’s matcha tea,” says the other server, Jann. She says matcha is a green tea, but the whole leaf is finely shredded and becomes part of the drink, so you get twice the the health benefits of the tea. Matcha’s also what they use in the Japanese tea ceremony.

“Gimme something colorful,” I say. “How about ‘Kyoto in Summer’?” she says. And she points to a picture of this red, white, and green drink. It’s $5.05, including boba pearls and the big fat straw you stab through the plastic lid to suck them up with.

The red at the bottom is strawberry, the white is organic milk, the green top layer matcha green tea.

Oh Man. Now I’m looking at a Bing Su (Korean for “shaved ice”) dessert. Costs $6.95. Just for the color, I go for the purple ube-bae Okinawan yam flavor, and what you get is this li’l coconut cream shaved-ice Mt. Fuji capped with yam topping and surrounded by chunks of actual yam. Tastewise, not spectacular, but nice, sweet, and mouth-freshening. Klin says ube-bae has a kind of double meaning, “because when you taste it, you go, ‘Ooh baby!’”

Fusion? That’s it right there.