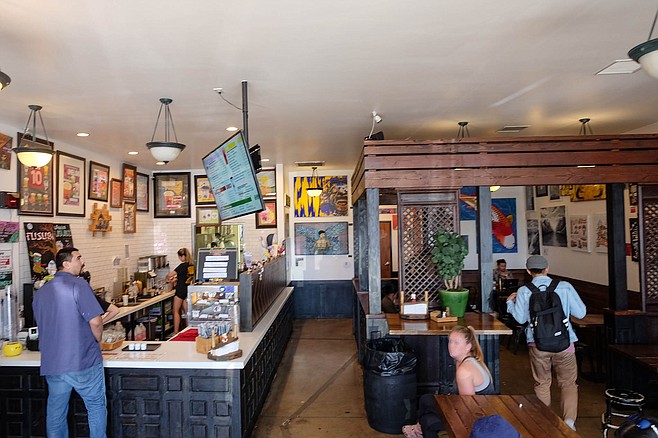 Everybody was Kung Fu drinking

You’re never too old to chase the bubble tea trend

It took family in town for me to catch on to how big boba has gotten. I’ve been walking around under the impression the bubble tea trend peaked 25 years ago. That’s when I recall the Taiwan-invented drink hitting American shores, and joining the throngs to run out and try the milky tea, loaded with chewy tapioca balls (a.k.a. boba) that get slurped up with the tea through extra wide gauge straws.

But in recent years it’s become more popular than ever. Bubble tea became a $2 billion global industry in 2016, and is projected to reach $3 billion within the next few years. More than half of bubble tea is now sold within the United States, and judging by my recent experience, credit teenagers for that.

When my sixteen-year-old niece asked where in San Diego we could go for boba, I realized my knowledge of local drinking establishments had a serious blind spot. Research led me to Kung Fu Tea, which opened in Kearny Mesa right on trend, in 2016. Turns out, Kung Fu is a big player in the American bubble tea game, where its chain of shops account for something like a fifth of the market. 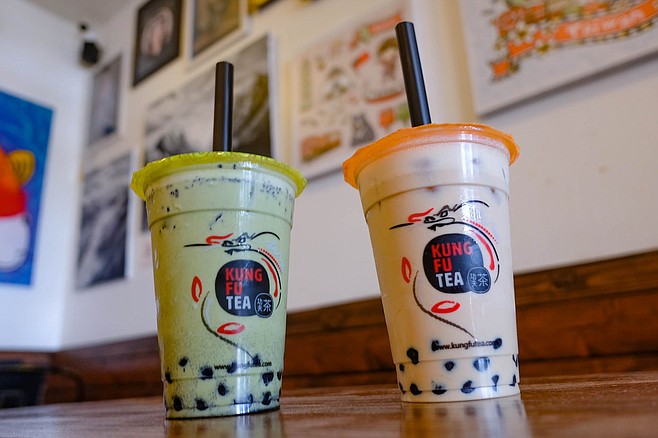 Sesame matcha latte and milk tea, both with boba

Inside a inconspicuous Convoy Street strip mall storefront lies a colorful space filled with local artwork and wood furnishings, and especially during spring break, lots of young people. I let them all go past me in line, because there are dozens of ways to do this, and it took me a while to decipher all the options on the menu, each made to order for 3 to 5 dollars, depending on size and toppings.

The main attraction here is milk tea, made with the likes of ether black tea, green tea, or oolong. It’s actually made with milk powder, shaken into the tea by a machine resembling a small paint mixer. You can opt for taro milk, honey milk, or almond milk, or skip milk altogether in favor of straight iced tea, fruit punch, or slushie. Whichever drink set-up you settle on, you can then add boba. And if you don’t like traditional boba, you can choose a different 50 cent topping, whether pudding (egg custard), crushed oreos, or mango jelly. 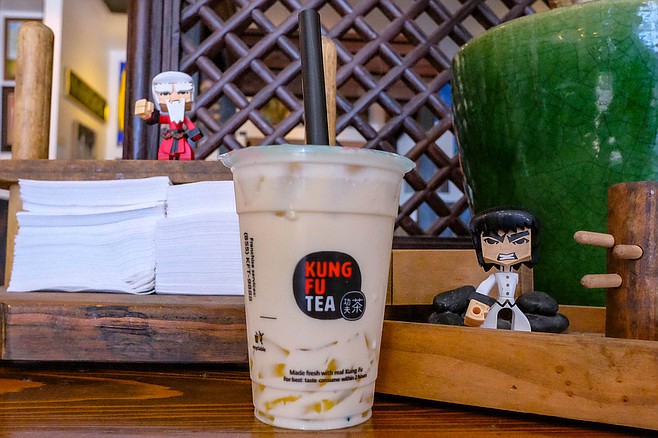 The kids mostly got the basic milk tea, made with black tea and boba. Uncle Ian had to be different, so he went for sesame matcha latte made with lactose-free milk. It gave a savory context for the sweet tapioca bobas, and I tried to convince the six year old that this choice proved I possess a more sophisticated palate. But she looked unconvinced, happily slurping crushed oreos through her straw.

Later, I got to talking with the staff, who told me the most ordered flavor is the winter melon milk tea. That’s flavored with syrup made from winter melon, a honeydew relative that’s far more popular on the other side of the Pacific than it is here. I made that the target of my next milk tea order, except, anticipating fruitiness, I topped it with mango jelly instead of boba. The winter melon tea tasted like a cross between cantaloupe and butterscotch. It’s not something I’d have ordered on purpose, but I admit I liked it better with each successive sip.

Still, I thought, More than three dozen flavors, and this is the most popular? I guess it wouldn’t mark the first time I was out of touch when it came to boba.

google China and Russia are any developing equal aircraft. Unveiling confidences of the fifth-generation stealth fighter could probably be a windfall for the U.S. military’s equal enemies