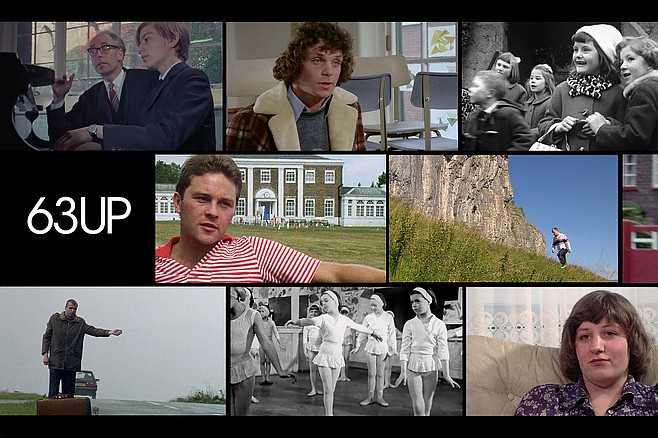 The late ’50s-early ‘60s proved to be a wellspring of worldwide experimentation in documentary realism. Banking on unscripted reactions to outrageous situations as his key to success, American television personality Allen Funt tucked his Candid Camera from public view. In Paris, Francois Truffaut’s The 400 Blows introduced us to Antione Doinel, a continuing character who Jean-Pierre Léaud would play in five-and-one-third of the director’s films. And Michael Apted, a young apprentice at Granada Television in Manchester, began his career as a researcher on what would become a lifelong commitment, the ninth installment of which, 63 Up, opens Friday at Landmark’s Ken Cinema.

It was originally intended as a one-off documentary on the British class system for the topical news series World In Action. Apted (Coal Miner’s Daughter, Firstborn, The World Is Not Enough) was operating under the belief that a child’s social class determines which road of life that child takes. Canadian director Paul Almond was the show’s originator, but as Apted later told the Radio Times, “It was Paul’s film... but he was more interested in making a beautiful film about being seven, whereas I wanted to make a nasty piece of work about these kids who have it all, and these other kids who have nothing.”

Using the Jesuit motto “Give me a child until he is seven and I will give you the man” to guide him, Apted chose to chart the growth of his fourteen subjects, staring at age seven and followed by incremental updates every seven years. The Up series has emerged as the world’s first and longest-running reality television show. The 56 years after its inception find the show alive and well, with the latest installment still managing to find a theatrical playdate.

21 Up was the first of the series that I recall seeing projected on a screen. (The original 16mm 4x3 format has since given way to digital 16x9.) This was long before the advent of camcorders allowed family members to chronicle — as a time-lapse photographer would the blossoming of a rose — their child’s every precious movement. At first glance, the film played as somewhat of a novelty. That was over forty years ago. Today, it stands as one of cinema’s greatest achievements, a use of the medium that’s at once blatantly logical and profoundly affecting.

The popularity of the series played a hand in robbing many of the participants of their anonymity, but at least one of them doesn’t seem to mind. Tony likes to joke about the time Buzz Aldrin hailed a ride in his cab. “Can I get an autograph?” a passerby asked. Tony was about to hand the astronaut the pen and paper until the fan said, “Not his. Yours!” Of the fourteen original participants, only eleven remain. Peter, who quit after 28 Up only to return for 56 Up specifically to promote his band, is once again on board. Charles Furneaux, who went on to direct Touching the Void, signed off for good after 21 Up. After years of threatening to leave the series, Suzy finally decided to sit this one out. And death, as it must to all continuing works of genius, finally caught up with Up. Lynn, the first participant in the series to die, passed away one year after the release of 56 Up.

It would be foolish to assume that you can know a person strictly on the basis of spending a few detached hours in the dark with them every seven years. But given the amount of time any completist devotee has invested in the series, it would be impossible not to feel attached to these people. Why else return? If the Up series were published in book form, I’d begin each installment by cracking it open to the chapter headed “Nick.” He always struck me as the funniest, most down-to-earth member of the group, the one I most looked forward to catching up with. Damn the luck if he hasn’t come down with throat cancer. It was so much more fun when they… we were young. There were many characters that I grew up watching, but few that I literally grew up with.

Though each film tries its best to bring new viewers up to date on the character backstories, for the uninitiated, it can feel akin to walking into a picture two hours after it began. If at all possible, it’s advised that curious newcomers binge-watch at least an episode or two before visiting The Ken.