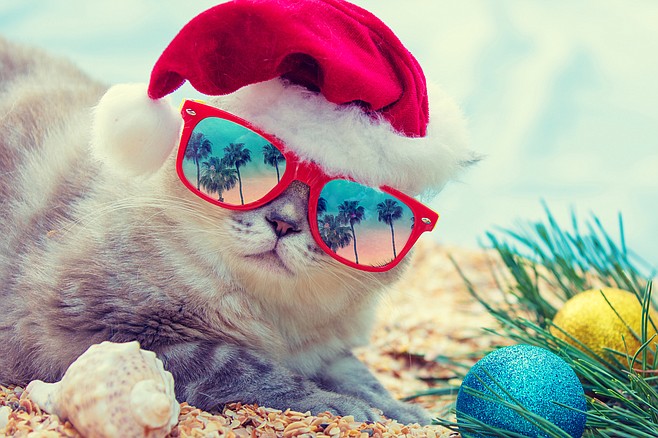 I would call it A Very Cat Christmas

It’s getting to be that season, when I can’t enter a retail establishment without having my ears bombarded by the same old Christmas songs I’ve heard over and over again for the past however many years. It seems really weird to me that we keep listening to the same songs, none of which seem much fresher than the Seventies, except for the Mariah Carey one from the Nineties. I would think this would be a prime area for a hipster takeover. Imagine a steady stream of entrepreneurial hipsters offering sustainable, artisanal, alternative Christmas music for retailers who are sick to death of hearing Burl Ives on repeat from Black Friday through December 26th. Now riddle me this, why isn’t there new Christmas music, or at least a better variety of Christmas music that more accurately reflects the aesthetic of modern, urban America?

Goofing around with Christmas music has proven bizarrely treacherous territory for pop stars. This year, John Legend and Kelly Clarkson tried to give “Baby It’s Cold Outside” a less date-rapey makeover, and people made fun of them for it. Dean Martin’s daughter, who is apparently a person we care about now, accused Legend of pilfering her dad’s thunder, and challenged him to “write his own song.” On the one hand, that’s hella mean-spirited for a septuagenarian coat-tail rider; but on the other hand, she kind of has a point about the lack of fresh Christmas tunes — why don’t we get Christmas music not targeted exclusively to grandmothers? With the notable exception of that one Pogues song British people love, we remain dreadfully short on hipster Christmas music.

For nearly a decade, I have been meaning to record an album of contemporary holiday jams featuring my own versions of popular Christmas songs. I have the concept all worked out. Every song would be a well known Christmas pop song, but all the lyrics would be replaced with the word meow, sung by me and my friends in various registers and to the tune of the original song, so it sounded like a chorus of musical cats were meowing out holiday classics. The only backing music would be simple midi tracks recorded on a Casio keyboard I found in the back of a Goodwill. The album cover would feature all of the artists wearing cat-themed holiday sweaters, holding various cats (with at least one of them being one of those smash-faced cats that never look happy), and making super serious faces that clash with the Yuletide cheer. Those who could grow mustaches for the photo shoot would of course do so. I would call it A Very Cat Christmas, and, if it were successful (how could it be anything but a huge hit?), I would follow up with A Very Cat Christmas 2: Meowlectric Boogaloo the following year.

You might think that’s a little too ironic hipster to achieve mainstream success, but let me remind you about how every year we are forced to listen at least once to “Dominick the Donkey,” an objectively terrible song by any measure, and which passed for ironic hipster parody in the 1960s when people didn’t have to work nearly so hard to appear clever. So you see, even the most ridiculous hipster nonsense can find its place in the cultural canon if people will only open their hearts in the spirit of the season.

Damn. I knew I shouldn't have gotten drunk on eggnog and talked loudly about "A Very Cat Christmas" at that one bar last holiday season.

Kudos the the "People Meowing Christmas Songs" people, whoever you are, for turning my dreams into a reality:

Away in a dive bar Santa's drinking away The elves are complaining When is our pay day?

Mrs. Claus is weeping No food for her table Cuz Santa buys a snort Whenever he's able

No one wants the job Let's face it, it sucks Circling the world Doesn't pay enough bucks

So just remember When opening your stuff The fat guy is pooped And has had enough.