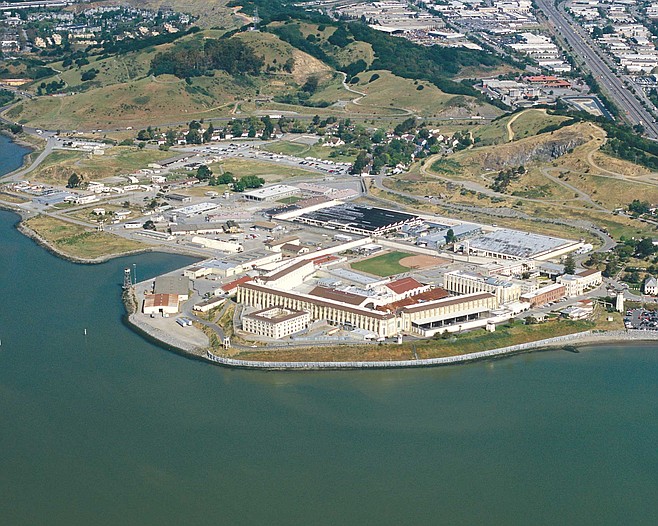 Flinner, a landscaper from Alpine, was sentenced to death for killing his 18-year-old fiancée in 2000 to collect insurance money. Since his arrival on death row, he’s written a book, A Portion of Thyself: Essential Reflections from Death Row, that was published in January 2010 by on-demand publishing platform BookSurge. On the back cover, Flinner writes, “Who better than I, a convicted murderer awaiting execution on California’s death row, to write about life and everyday living?” 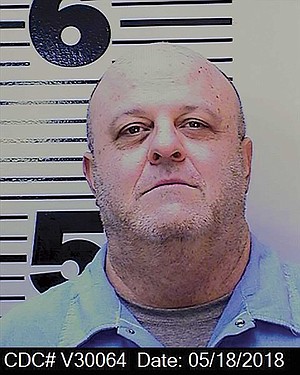 Six years later, Flinner popped up in the news for launching a campaign to allow inmates to donate organs. He told the Daily Mail Australia that doing so would give condemned prisoners “a greater purpose” in life. In a 2016 interview on the TV show 60 Minutes, he said, “There is a lot of evil that lurks [inside] prison walls, but I think an even greater evil is standing idly by outside the fish bowl... and letting other people die unnecessarily.”

Flinner was sentenced to death for the June 11, 2000 murder of Tamra Keck. The two had met the previous year on a telephone chat line. At the time, Tamra was still a senior at West Hills High School in Santee.

Flinner took out a $500,000 insurance policy on Keck and then hired one of his former employees, Haron Ontiveros, to kill her. He called Tamra and told her Ontiveros was stuck somewhere and needed a jump. When the girl arrived at the remote Alpine cul-de-sac, Ontiveros shot her in the back of the head.

Flinner and Ontiveros were tried at the same time, but with separate juries. Both were convicted of murder and special circumstance allegations of murder for financial gain and lying in wait. Ontiveros was sentenced to life without parole; Flinner — who had a prior rape conviction — got the death penalty.

Flinner’s case has been fully briefed on direct appeal before the California Supreme Court since July 7, 2014.

Flinner is a regular poster on the Behind Bars website. His latest post, dated October 11, 2019, reads, “Be careful how you treat a good woman. She will love you more than anything, treat you like a king, be more loyal than the rest, put up with your shit for way too long, always be there when you need her, take you back a hundred times…. Then, one day, she won’t anymore….”

Rices had a rough childhood. His mother was a drug addict and a prostitute. On trial for the execution-style slaying of two people in an El Cajon liquor store, Rices showed no emotion when the jury voted to convict him. After just two hours of deliberations, they subsequently voted to sentence him to death, ignoring the defense attorney’s plea for leniency — and a life sentence — due to Rices’ troubled upbringing. 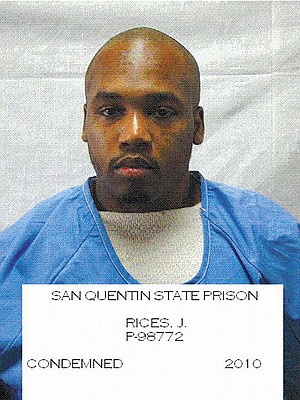 Jean Pierre Rices showed no emotion when the jury voted to convict him.

Heather Mattia and Firas Eiso, 22 and 23, worked at Granada Liquor in the 900 block of Broadway in El Cajon. On the night of March 1, 2006, they had just closed the store when Rices and another man confronted them as they were leaving just after 11 pm. Rices carried a 9-millimeter handgun and wore a mask.

Mattia — whose brother owned the store — and Eiso were shoved back into the store and told to get on their knees. Rices’ partner, Anthony Miller, opened the cash register and grabbed $1250 in cash, which he shoved into a bag, along with several packs of cigarettes.

As the pair was about to leave, Rices turned and shot both victims in the back of the head.

Both Rices and Miller were promptly apprehended by police. Rices pleaded guilty and admitted two special circumstance allegations — murder during a robbery and multiple murders — which made him a candidate for the death penalty. According to a July 2009 NBC San Diego news report, Mattia’s sister, Evelyn, urged jurors to impose the death penalty rather than life without parole, maintaining, “Why should he live 80 to 90 years?” Apparently her words had an effect on the jury; jurors took just two hours to sentence Rices to death.

Rices’ direct appeal has been fully briefed before the California Supreme Court since September 22, 2016. In December 2017, the Supreme Court affirmed both Rices’ conviction and his death sentence. In April 2018, the U.S. Supreme Court turned down Rices’ petition for a review.

At one point, he was a sergeant in the Marine Corps, stationed at Camp Pendleton. New recruits looked up to him. But on a warm summer morning in September 2005, Derlyn Threats was a cold-blooded killer who butchered a young mother in Vista, all because he wanted a video game. 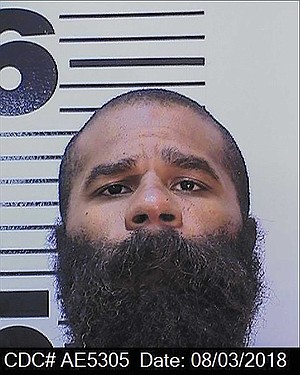 At one point, Derlyn Threats was a sergeant in the Marine Corps. New recruits looked up to him.

On September 1, 2005, shortly after 8 am, Threats broke into a home on Diablo Place (now Via Angelica) in Vista, a family tract on the south side of State Route 78. He was in the process of stealing some video games when he heard a noise. It was 24-year-old Carolyn Neville, who lived in the home with her husband Stephen and their six-year-old son, whom she had just dropped off at school. Carolyn had lost her house key, so she had left the front door unlocked. She returned around 8:30 am.

No one knows for sure what transpired next except for Threats, and he hasn’t talked. What is known is that around 9 am, neighbors heard her screaming for help and a man ordering her back into the house.

Sheriff’s deputies found Carolyn’s bloodied body just inside the front door. They saw Threats in the backyard, clutching an Xbox video game console. Threats began to run, and deputies took off after him. After a short chase he was apprehended. His hands were covered with socks soaked in what was later identified as Carolyn’s blood.

Carolyn had been stabbed more than 70 times, first with a knife and then with garden shears Threats had taken from her garage.

During the trial, deputy District Attorney Patrick Espinoza called the murder “sadistic — just a level of horror (with) unspeakable acts.” Chief Medical Examiner Glenn Wagner, who performed an autopsy on Carolyn the morning after she was attacked, testified that she had 74 stab wounds and at least two markings from a stun gun. Nine of the stab wounds were potentially fatal, Wagner testified, telling jurors, “The victim was alive during each injury.”

A jury ultimately convicted Threats of first-degree murder and special-circumstance allegations, including torture and robbery — which made him eligible for the death penalty.

The jury voted in favor of death, and Vista Superior Court Judge K. Michael Kirkman followed the jury’s recommendation, noting that the “unmerciful and repeated assault” to Carolyn’s head made her nearly unrecognizable.

During the trial, her husband, Stephen Neville, said he has psychological scars from which he will never recover. “You took away my family,” said Neville, who had remarried. “You tore us apart.... You do not deserve to see the light of day — ever.”

Later, Neville successfully petitioned to change the name of his street from Diablo Place to Via Angelica.

Numerous delays held up the filing of Threats’ appeal. The latest: The Superior Court of San Diego County was directed to complete and deliver the clerk’s and reporter’s transcripts on appeal on or before December 2, 2019.

Williams, a construction worker originally from Indiana, had a long history of sex crimes when he was sentenced to death for kidnapping, raping, and strangling a teenage girl from Chula Vista, a crime he had committed nearly 20 years earlier. DNA led to his arrest in 2003. At the time of his sentencing, the prosecutor called him a “poster child for the death penalty.”

Williams had already been convicted of several other sex offenses, including molesting one of his own daughters — when she was just 6. In 1986, he was sentenced to 17 years in prison for raping a San Diego woman and her six-year-old daughter. He was paroled in 1998, but promptly sent back to prison for molesting his 13-year-old nephew. 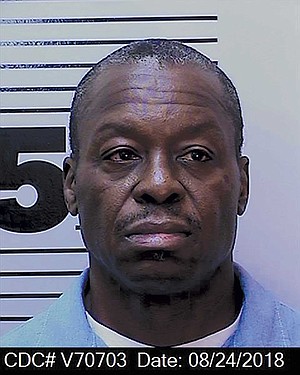 At the time of sentencing, the prosecutor called George Williams “a poster child for the death penalty.”

Williams was sentenced to death for the rape and murder of Rickie Ann Blake, an eighth-grader at Bonita Vista Junior High School who lived with her parents and three other children in a home on the 1500 block of Oleander Avenue in Chula Vista. Rickie Ann’s mom, Alicia, discovered the 14-year-old missing on the morning of April 11, 1986. The front door was open, the TV was on, and the family dogs were in the garage.

Shortly after 10 pm that night, Rickie Ann’s battered body was found by a motorist on the Main Street exit ramp from Interstate 5 in Barrio Logan. An autopsy found she had been raped, strangled, and beaten, and that injuries to her mouth and gums suggested a bottle had been bashed against her lips.

As there were no signs of a struggle, police surmised Rickie Ann had known her assailant. The girl’s older sister told them that she had answered a phone call around midnight from a man who said his name was George and had asked to speak with Rickie Ann, but his identity was unknown.

Rickie Ann’s funeral service was held at the Little Chapel of the Roses in Bonita. Her favorite Padres baseball cap was placed upon the casket, which was draped with a sash that read, “We’ll always love you, Banana.”

A week after Rickie Ann’s body was found, a heavily intoxicated Williams raped his neighbor and her six-year-old daughter and then passed out in their apartment. He was still asleep when police arrived. In exchange for a guilty plea, he was given a 17-year sentence, but was paroled in 1998 back to his hometown of Gary, Indiana. Less than a month after his parole, Williams molested his 13-year-old nephew, which led to a sodomy conviction and three more years in prison. He was paroled for a final time in 2001.

In the meantime, the investigation into Rickie Ann’s death had gone nowhere. But advances in DNA technology led authorities to take a second look at many old, unsolved murder cases. Williams’ DNA had been swabbed just before his 1998 release from prison. In 2003, DNA from Rickie Ann’s case was re-tested and entered into CODIS, the FBI’s DNA database. Williams was a match. He was arrested in Indiana, and while he initially maintained he had never met the girl, he later told police he had had consensual sex with Rickie Ann.

The jury didn’t buy it, and on November 8, 2005, Williams was convicted of first-degree murder, rape, and kidnapping. The death sentence was handed down after seven more days of jury deliberation.

Williams’ attorneys didn’t file their appeal until December 2013. In December 2016, California’s high court affirmed Williams’ conviction and sentence, and in June 2017 the U.S. Supreme Court declined his petition for a review.