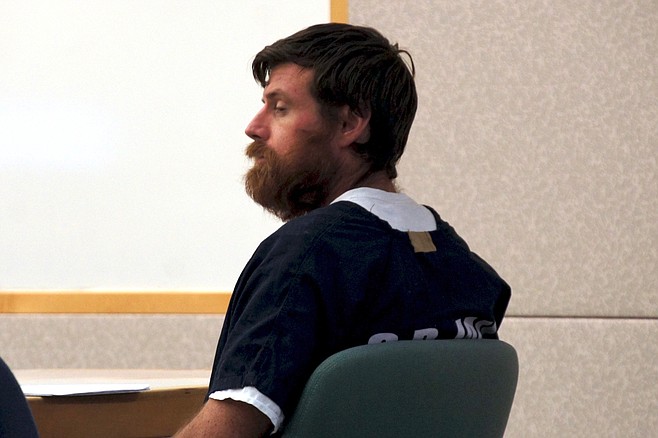 But charges of rock-throwing on I-5 remain

The owner of the nice estate on Via de Santa Fe splurged on his Halloween decorations. Two years ago, in 2017, he bought $15,000 worth of animatronic creatures from a high-end “prop” store. He shared his love of the holiday by placing his extravagant, moving novelties at the edge of his Rancho Santa Fe property nearest the road so that every passerby could enjoy them. 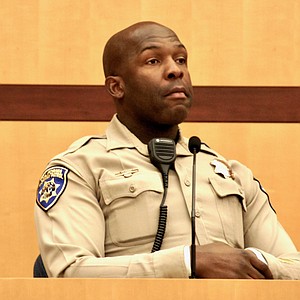 This homeowner had surveillance cameras on that part of his property. On them, he captured video of a man using a baseball bat to smash up his pricey decorations about 1 pm on October 14, 2019.

San Diego County Sheriff’s detective Stacey Rojas later reviewed the surveillance video. She saw a red, four-door Prius drive up and stop in front of the home. A bearded man got out of the passenger side. He had a baseball bat in his hand. He went straight to the Halloween decorations and smashed them for about 20 or 30 seconds. While that was happening, the Prius drove a little forward and then stopped in the road, “It moved, and parked further up.”

The driver never got out. After the vandal’s unprovoked attack on the holiday decor, he ran back to the Prius and got back into the passenger side. The Prius immediately drove off. Detective Rojas said the video did not clearly show the license plate on the red Prius. However, she said that a neighbor who drove up did follow the Prius and took a photo of the car and its plates, but for some unexplained reason that evidence was not presented in court at a hearing two weeks later. 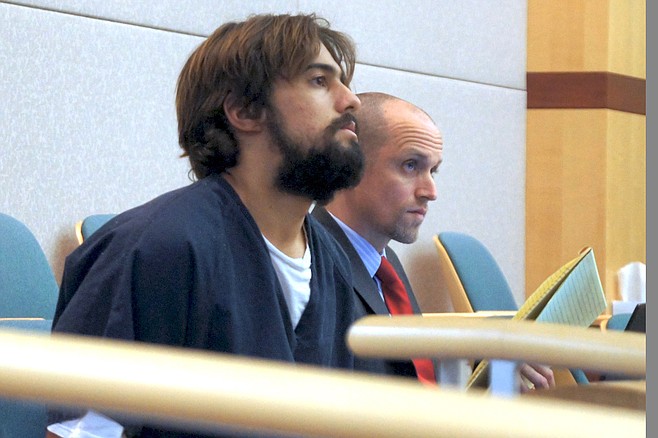 David Rodriguez, here in court with attorney Charles Millioen, was the passenger in the prius that October night.

Later that same day, about 8 pm, a Border Patrol agent noticed dangerous activity on Interstate 5. Agent Scott Meehan testified that he was driving north on the freeway near the Las Pulgas Road exit in Camp Pendleton when, “I saw brake checking.” Meehan testified during at a pretrial hearing on October 31, 2019. He explained that he saw two cars going back and forth, the car in front would brake suddenly and cause the car behind to swerve to avoid a collision, and this happened multiple times. The car in front was a red Toyota Prius and the following car was a gray Toyota Corolla. Agent Meehan said he was in a marked Border Patrol vehicle and he put on his lights and both cars pulled over to the side of the freeway. It was completely dark at that time, and agent Meehan used his flashlight when he approached the cars. 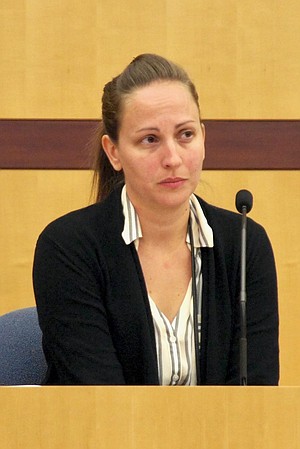 Detective Stacey Rojas reviewed video of the suspect baseball-batting $15,000 worth of halloween decorations.

Agent Meehan spoke with the driver of the Corolla first, that man claimed that the people in the Prius had thrown fist-sized rocks at his car; and then the Prius driver had threatened him with a pistol and then shot out a window on his car. The alleged victim claimed he was trying to get close enough to the Prius to get the license plate number, and that was when the Border Patrol agent witnessed the “brake checking” on the freeway. Agent Meehan used his flashlight and saw that the right-rear passenger window of the Corolla was “spider-webbed and shattered.” 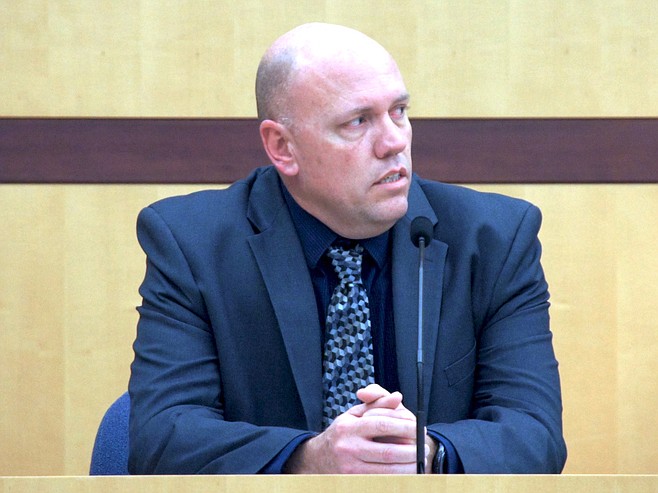 Scott Meehan, Border Patrol agent, testified, ‘I saw brake checking,” which prompted him to pull over both cars involved.

(Katuzin has had previous court cases in San Diego County, starting in the year 2002.)

He found a black gun

Brian Allen, who has been with the California Highway Patrol for 20 years, was the first CHP officer to arrive. There were already three Border Patrol units on the scene, trying to extract the occupants of the Prius, when officer Allen arrived. The CHP officer was informed that there might be a gun in the Prius. Officer Allen looked at the damage to one window on the Corolla, and later he said, “It looked like a bullet hole. The window was not completely shattered out, there was a hole through it, and all the glass was in the interior of the vehicle.”

In court two weeks later, officer Allen testified that Christian Alexander Katuzin, 35, was taken from the driver’s seat of the Prius. The officer testified that the man in the passenger seat was David Miguel Rodriguez, 26.

Officer Allen searched the Prius and he found a black gun, “It ended up being a pellet gun, but it looked just like a real gun.” He said the pellet gun was completely black with no red part nor any indication that it might be a toy or just a replica of a 9 mm firearm. Officer Allen said he found rocks on the floorboards of the Prius. And a baseball bat.

The driver of the Corolla had captured what officer Allen described as “dash-cam video.” This video supported that driver’s account that the person in the passenger side of the Prius threw a rock which bounced on the road and then struck the undercarriage of the Corolla. Then the Corolla accelerated up to the Prius (the driver said he wanted to get the license plate number) and then a pop sound was heard and then there were sounds consistent with a window shattering, (the Prius was not on-camera at that moment, the Corolla driver said the Prius was to his right rear at that moment). Officer Allen said he could hear the Corolla driver making remarks while his vehicle slowed down, near the end of that dash-cam video.

Jail records describe Christian Alexander Katuzin as 35 years old, and 6 feet 2 inches tall, and 182 pounds. At his court appearance he sported a thick red beard. The hair on his head was a darker red. Co-defendant David Miguel Rodriguez, 26, is described as 5 feet 11 inches tall and 180 pounds. Rodriguez had a thick mane of dark hair on his head and a full, black beard when seen in court. Each defendant is being held in custody in lieu of $30,000 bail.

Prosecutor Robert Bruce asserted that both defendants are culpable of multiple felonies. The deputy district attorney cited aiding-and-abetting law which he said the driver, Katuzin, had violated.

Judge David Brown found an insufficiency of evidence to hold either defendant to the felony vandalism charge for destroying the expensive Halloween decorations earlier in the day. The judge dismissed misdemeanor resisting-officer charges that had been filed against both defendants. But Judge Brown ordered both Katuzin and Rodriguez to face multiple felonies for throwing objects at a vehicle, plus assault with a deadly weapon.

Katuzin and Rodriguez both pleaded not guilty to all charges. The defendants remain in custody awaiting trial.

The charges that are sticking appear far more serious than the vandalism. These guys are in deep doo-doo, and if convicted will get some hard time.

A minister? https://wgiuniversityning.com/m/profile?screenName=3d0l517xnvk84 Has an arrest record going back to 2002 in San Diego. He is in a good place right now, gray bar abode.

Both Katuzin and Rodriguez are due back in court on Monday, January 6, 2020. It appears the DA's office again filed charges of felony vandalism, in a new criminal complaint. Both defendants continue to be held in custody, and plead not-guilty to all charges. 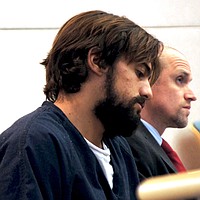 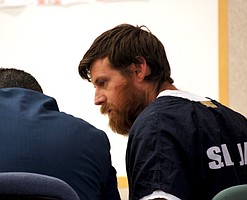 The prosecutor tried again to bring charges against two suspects for destroying expensive Halloween decorations, and they were all in court again on January 6, 2020.

A woman who reportedly saw a man smash up Halloween decorations with a baseball bat before he jumped into a waiting Prius, was able to take a photo of the red Prius with her cell phone. But she did not get a good look at the faces of the vandal nor the Prius driver, and told investigators that she would not be able to ID either man, later.

Deputy DA Robert Bruce showed the new evidence, the photo taken by the passerby, to a new judge, but once again the judge declared an insufficiency of evidence and the felony vandalism charges were dismissed. 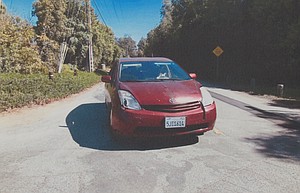 Evidence photo of the red Prius. 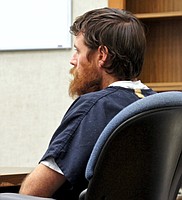 Katuzin is the registered owner of the Prius. Photo by Eva Knott.

On January 22, 2020, Katuzin made a plea deal. He admitted Penal Code 245 (a)(4), assault likely to produce great bodily injury. He expects to serve 240 days in custody, then will be on 3 years formal felony probation. Prosecutor Robert Bruce said of the co-defendant, David Rodriguez, "Rodriguez’s mental competency is being evaluated." 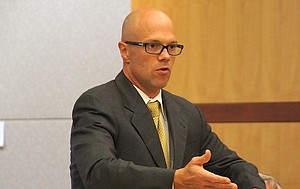