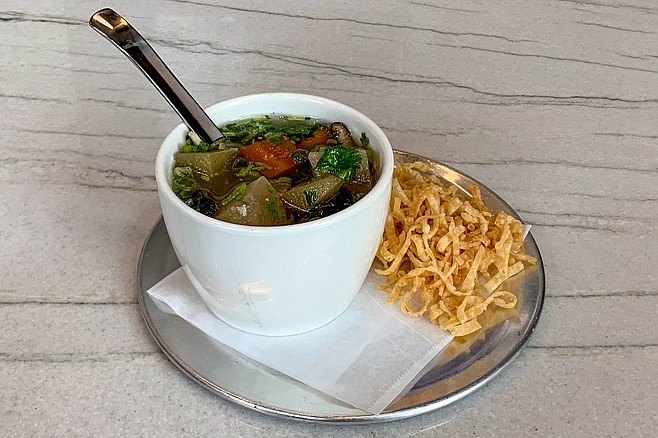 Rain. Wind. Cold. Our long summer has finally given way to what passes for winter (for the time being), which has proven the perfect time to visit a new restaurant built around a fondness for soup.

Soup Du Jour recently opened on Aero Drive, in a modern, mixed-use apartment building on the northern edge of Serra Mesa. Last I visited, this was a deli that cured its own meats and made a mean pastrami sandwich. I’m sorry to see it go, but then, there aren’t a lot of restaurants or other retail businesses nearby to drive traffic to the area. 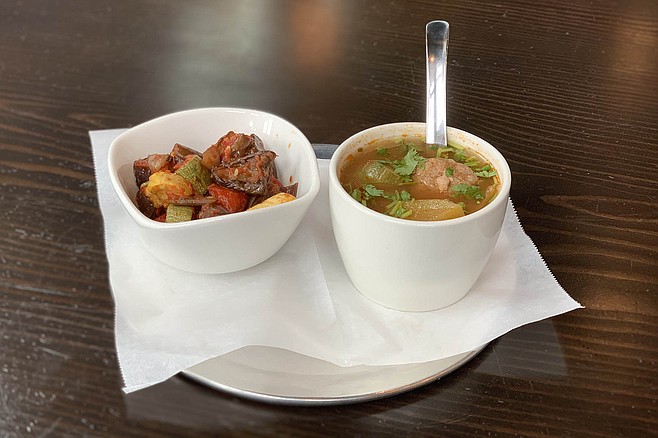 Chunky albondigas soup with a side of roasted vegetables

Nevertheless, on a rainy day this week I found a lively dining room populated by soup fans slurping their lunches. The new business has added a few decorative touches, but for the most part the set-up of the previous tenant remains intact, a long service counter slash beer and wine bar on one side, booths and community tables banked by windows on the other, and a spacious dining patio out front. 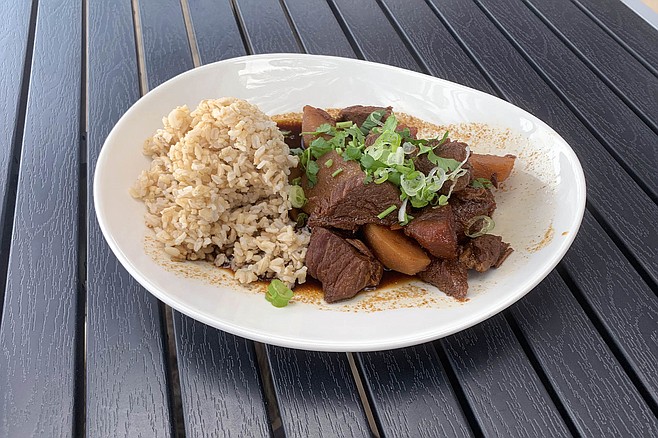 Braised pot roast with a side of rice

The menu’s not exclusively soup: small plates ranging from 5 to 9 dollars include spring rolls and Taiwan-style popcorn chicken, while 10- to 13-dollar salads range from sesame noodle salad to crab mango. Which is to say, there’s an unusually diverse assortment of solid meal options, some revealing Asian influences, some merely highlighting the owners’ preference for local vegetables and naturally raised proteins. 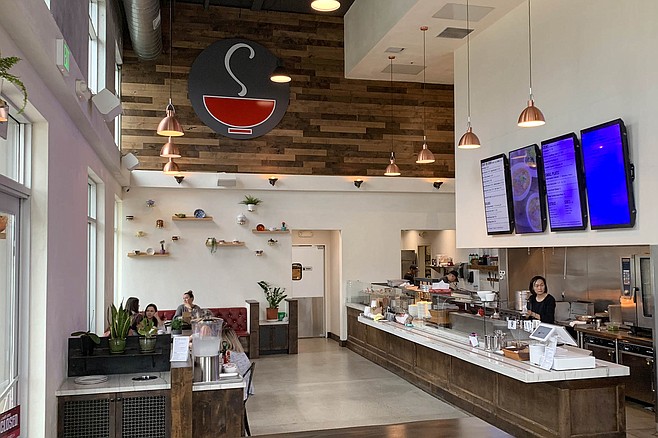 But yes, what the family behind the place really loves is soup, and they furnish no fewer than six soup options, available by $6 cup or $10 bowl. There’s a lot to like here. For fans of Mexican soups, there’s a free range chicken tortilla soup served with strings of oaxacan cheese melting into it, and albondigas packed with chunks of chayote and large meatballs made from a beef-pork blend and fragrant dose of cumin. For Asian flavors, you can look to the hot and sour soup featuring both shitake and wood ear mushrooms, and the option to include shrimp; though I would recommend checking out the daikon soup, swimming with tender daikon radish, bolstered by shitake mushrooms and the option to include spare rib. 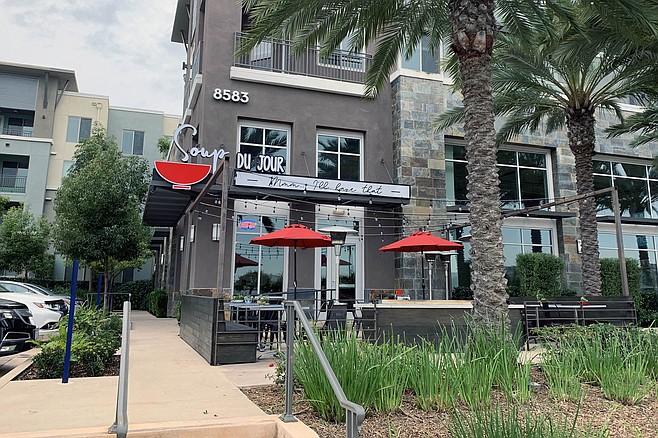 For a place that makes everything from scratch, I’m impressed to find so many different base stocks at play. A beet broth is the base for both vegan and beef borschts, while the corn clam chowder builds off a roux and clam juice. There’s beef for the albondigas, chicken for the tortilla, and a vegetable stock built from ginger, carrot, chayote, and mushroom starts off the vegan daikon soup, then gets blended with pork broth for the short rib version — my favorite of the bunch so far, in case that’s not already clear.

I was surprised not to find any noodle soups, but I didn’t miss them. While the stocks are thin, they do not want for flavor, and the large, chunky solids make them fairly substantial, whether you’re bouncing from cup to cup as I do, or commit to a large bowl. Either way, they come standard with sides such as tortilla or wonton strips, which can be upgraded for 1 to 4 bucks to a choice of something like naan or roasted veggies: a tasty jumble of eggplant, zucchini, squash, tomatoes, and onions coated in chili paste.

When I asked whether cold soups such as gazpacho or vichyssoise might make an appearance during warmer times of the year, the owners said it’s a consideration. But they’re confident soup lovers will eat these chunky soups year round. If not, they can always move over to the stews menu, whether ratatouille, chickpea and cauliflower curry, or a hearty braised pot roast with hunks of carrots and potato ($11).