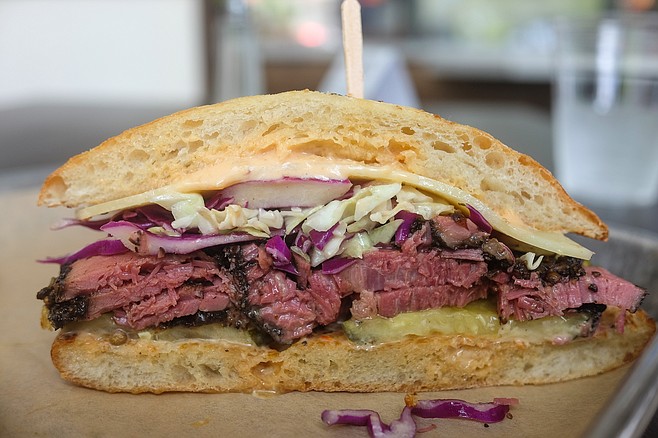 Among the snappier lines to come out of the Old Testament story about Israelites eating manna from heaven is, “man does not live by bread alone.” It’s always been taken to mean: food is important, but people need spiritual nourishment to truly live. However, I would argue that, five thousand years later, Jewish Delicatessens in New York City gave the line a second, more literal interpretation, by inventing the pastrami sandwich.

I’m sure manna would be just the thing when starving in the desert. But when I’m starving in the afternoon in the vicinity of a good deli, the brine, smoke, and peppery crust of a thick cut pastrami stacked between slices of fresh bread sounds all kinds of nourishing. 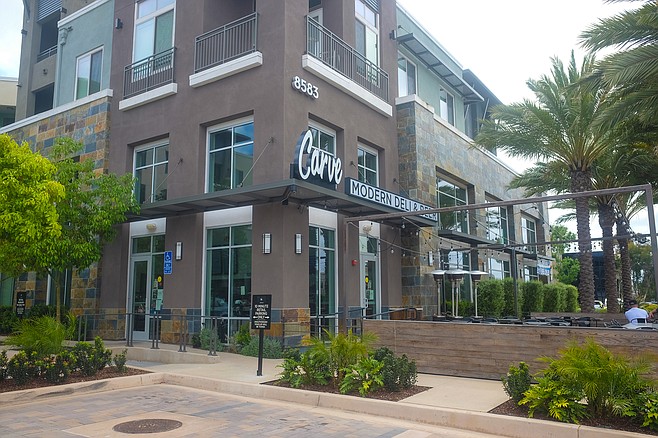 Across the street from Montgomery Field.

Against the odds, I found myself within range of such a deli in Serra Mesa. Spelling its name in all caps, CARVE bills itself as a “modern deli,” Built into the ground floor of a multi-story residential complex across the street from Montgomery Field on Aero Drive, the casual breakfast and lunch spot has the look of a modern cafeteria. High ceilings and plenty of sunlight provide most of the atmosphere for an uncrowded mix of booth seating and high top community tables. However, if you enjoy the weather, the place to sit is on a spacious patio.

The relative modern-ness of its deli food shows up in twists on the traditional. For example, when I ordered the Smokin’ ‘Strami ($11.95, with 5 ounces of meat), what I got was very similar to a Rueben: pastrami dressed with swiss cheese and Russian dressing. But rather than sauerkraut, it combines shredded cabbage and pickles, and instead of rye bread, it’s served on a toasted ciabatta.

I was admittedly dubious about the ciabatta. I’m told the reasoning behind it is to avoid substitution requests — from people who don’t like rye, for example — and make it easier to manage inventory for a small restaurant in a low foot-traffic area. I can’t say I’ve ever had pastrami on ciabatta before, but the soft yet chewy roll, fresh out of Sadie Rose bakery, handily won me over.

So did the hickory smoked brisket comprising CARVE’s made-in-house pastrami. They slice it nice and thick, so even though it wants to fall apart in your mouth, there’s an opportunity to sink your teeth into it that I appreciate. It’s not the most flavorful pastrami I’ve ever had, but it’s certainly near the top of the list of west coast versions I’ve tried.

I was less enthused by the Russian dressing, which I found sweeter than necessary. More accurately, the sweetness showed up a little more on this Rueben, without the bite of the rye bread or the acid of sauerkraut to balance it out.

Pastrami needn’t live on rye bread alone, but if you prefer it that way, I noticed Carve was selling it for $2.50 an ounce.

[Editor: Read this week's Tacos — 2018 issue re pastrami on tortillas at CARVE.]