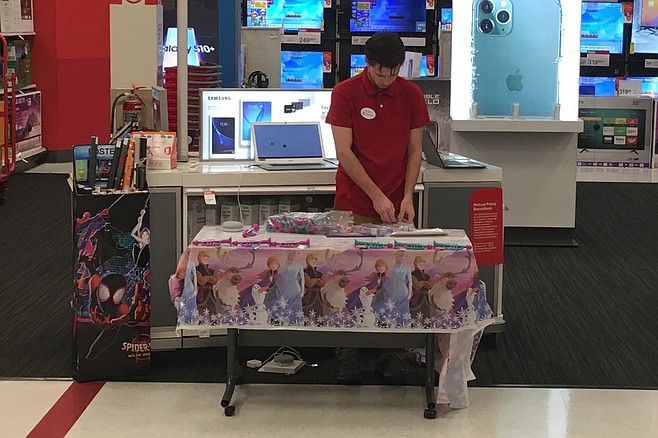 This wasn’t story hour at the library

Casually Googling to figure out which one was Elsa and which one was Anna was enough to awaken the Algorithm, and it wasn’t long before I was presented with a sidebar ad from Target that invited me to “Celebrate Disney Frozen 2 at our free in-store event on Nov. 23, 10 am-1 pm. Hear Elsa & Anna tell all-new tales on Google Nest Mini, enjoy fun giveaways, and more!” A canny move. The kiddies, still high from attending opening night shows, could direct that energy toward beginning their Christmas campaigns on the parental wallet. The parents, still exhausted from the previous evening’s pilgrimage to Arendelle, could rejoice in the prospect of someone else occupying their children for a few minutes — and maybe pick up some Smart Storytelling tech in the process. (Not for nothing did Alison Willmore’s review in New York Magazine get the headline, “Frozen II Exists Because the Market, Not the Story, Demanded it.” As of this writing, it has made over 700 million dollars.)

But alas: no spirit or spell could make the Google Nest Mini shake hands with the Target store wi-fi. The plan, said the beleaguered young man manning the table with the plastic Frozen II tablecloth, was to read from the Frozen II Little Golden Book. “For certain books, the Nest will key into your voice and recognize what you’re reading, and it can provide sound effects. But it’s not working, and we don’t even have the right book.” 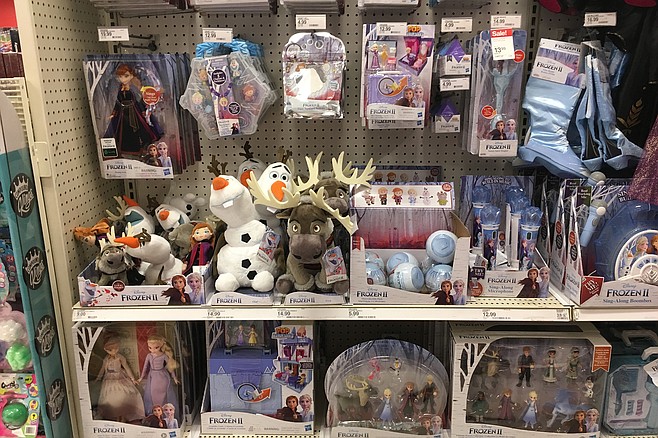 He showed me the Frozen II Big Golden Book, which, he advised a co-worker, had a lot of pages by comparison, big pages, with a lot of words on each page. This wasn’t story hour at the library. The reading was scrapped. The giveaway involved tiny plastic trumpets, tinier bottles of soap bubbles, and extremely tiny Viewmaster-style cameras depicting scenes from Frozen II, in theaters now! There was also a coloring and activity pad, which included stickers.

Nothing else to do but shop: all Frozen II merchandise was 25 percent off using Target Circle. And there was so much merchandise. Seven Lego sets; seven books; Elsa & Anna dresses, plus jackets, tees, and sweatshirts; sheets and comforters; night lights and snow globes; lunchboxes and thermoses; purses and backpacks; tea sets and baking tins; headphones and hair clips; bath bombs and body mist; board games and drawing tools; costumes and karaoke; and of course dolls — so many dolls. Never mind Anna and Elsa; consider Olaf, the half-smart snowman given life by the ice queen. Just a sidekick, but so marketable! Follow-Me Friend Olaf, $39.99; Sing & Swing Olaf, $24.99; Lego Olaf, $14.99; oversized stuffed Olaf, $49.99; regular stuffed Olaf, $14.99; small stuffed Olaf, $9.

As I left, I heard a child’s despairing cry rising up from the vicinity of the 5’x4’ Frozen II Ultimate Arendelle Castle (Chateau supreme d’Arendelle), featuring seven furnished rooms and a moving balcony for $199.99, followed by a parent’s weary threat: “Fine, then Santa’s not coming this year.” Let it go...