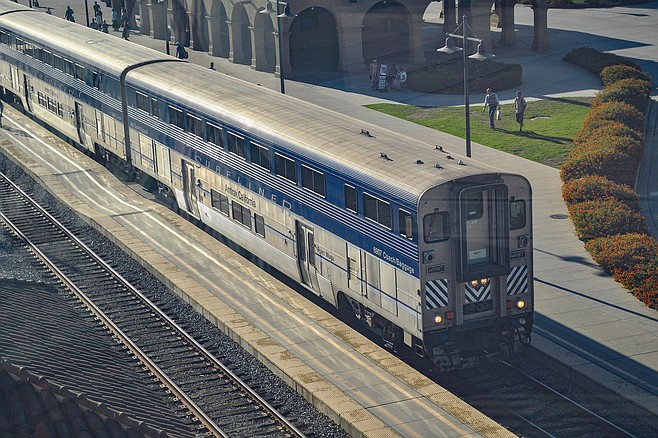 The Coast Starlight: journey over destination

Few modes of travel better exemplify the aphorism, “It’s not the destination, it’s the journey,” than a train ride. America’s interstate rail system is neither faster nor cheaper than air travel, and if you take the reductionist view, both experiences amount to occupying a rigid seat inside a metal tube for hours on end. In lieu of efficiency, Amtrak emphasizes the romance of rumbling along at ground level, with America’s geography on display out that train window. But the unfortunate truth is that modern Amtrak cars simply aren’t that romantic. Seating is marginally less cramped than those provided by airlines, but if there’s a true benefit in 2019, it’s that Amtrak couldn’t overbook its passenger cars if it tried. It’s just not popular enough to furnish the special brand of discomfort experienced by oversold flights on commercial airliners. So there’s less of a crowd to contend with, on a train.

Still, Amtrak tries to sell us on the idea of romance of the journey, held over from a past era when the romance was inherent, because rails did provide the fastest path across the country. Every long, transnational train ride came pre-loaded with anticipation, quite often because the destination was a literal new frontier for its passengers, who most likely were embarking on a new life or a western adventure.

Five years back, Amtrak launched a writers residency, offering free rides to select writers willing to wax romantically about their contemporary rail adventures. That program has more recently devolved to a social media residency. The question then becomes whether the problem was a general lack of interest in train stories, or a general lack of interest in reading about people enjoying the journey over the destination.

Nevertheless, one has to suppose the monopolistic passenger rail company is thrilled that the name of one of its west coast routes, the Coast Starlight, has been given to a new play. Performed at La Jolla Playhouse until September 15, The Coast Starlight depicts conversations between passengers on the route’s 36-hour journey, which tracks from Los Angeles up the coast to San Luis Obispo, then north through Oakland and Sacramento, before crossing Oregon to Portland, and concluding in Seattle, Washington.

Except what it actually depicts are imagined conversations between the passengers, who, the audience is told, actually spend the overnight ride thinking about speaking to one another without much doing so. They speak of being in touch with loved ones via phone, skype, or email, yet do little to engage one another’s’ visceral sadness, anxiety, or uncertainty.

In that sense, the romance of the train journey depicted offers a wistful look at the ways our journeys might be enriched. If not by living an era where the cumbersome rumbling of a long train ride offered the quickest transit between two points, then one where we might share 36 hours with other human beings in a small space and actually form relationships, rather than biding time until the journey has ended.