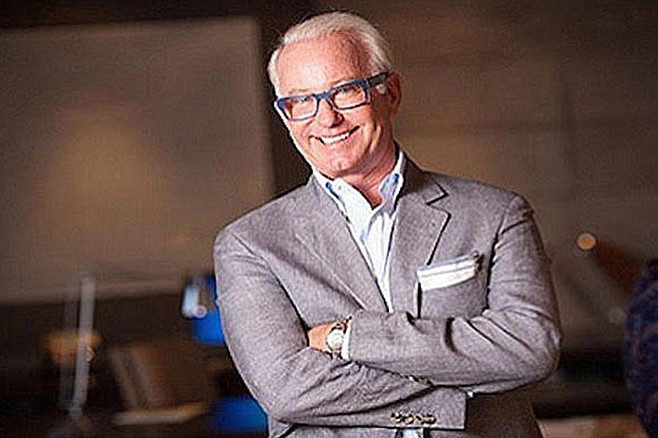 San Diego City Attorney Mara Elliott, a Democrat, has been raking in super-sized campaign contributions from some of Republican Mayor Kevin Faulconer’s most stalwart backers, including one mixed up in an embarrassing wedding scandal tied to the failed SoccerCity city land grab. From the beginning of January through the end of June, Elliott’s 2020 reelection committee raised a total of $160,035, according to her campaign’s six-month accounting, filed July 31. Near the top of the list of deep-pocketed developers is Morgan Dene Oliver, whose occupation is listed on Elliott’s disclosure as Chief Vision Officer for Brookfield Properties. Oliver individually gave $2300 to the first-term city attorney on May 29, per the disclosure. 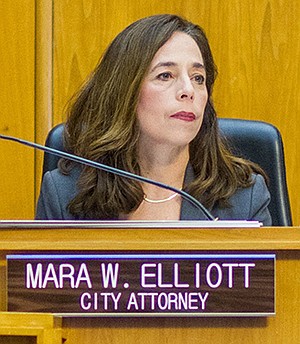 Brookfield Residential Properties Inc. of Canada bought out the San Diegan’s OliverMcMillan development company in February 2018 for an undisclosed sum. The move followed 2017 revelations that Oliver met secretly with Faulconer and backers of SoccerCity in a lobbying bid that convinced the mayor to support their Qualcomm Stadium takeover well before public disclosure and hearings. Then in May 2017, it came to light that McMillan had quietly opened his posh Point Loma bayside mansion for the August 2015 wedding of Faulconer’s then-chief of staff Stephen Puetz. The festivities were held four months before Soccer City’s pitch to the mayor.

Besides developer cash, about 30 percent of City Attorney Elliott’s political money this year has come from those listing their occupations as lawyers, filings show. The downtown law firms Seltzer, Caplan and Procopio, both registered to lobby at city hall for real estate interests, rounded up a total of nearly $3000 each in employee contributions. Individual $1150 givers to Elliott’s cause included San Diego Housing Commission general counsel Charles Christensen of Christensen & Spath; David Watson of Duane Morris; and Candace Carroll of Sullivan Hill.

From the ranks of non-lawyer lobbyists, Chris and Jennifer Wahl of Southwest Strategies each kicked in $1150. Other sizable campaign money has come from three executives at ColRich. The firm’s chief Danny Gabriel and co-chairman Richard Gabriel, along with president Barry Galgut, each kicked in $2300 in late June, the disclosure shows. The controversial Mission Valley and Otay Mesa housing and commercial developers have proven to be a reliable source of campaign cash to Vivian Moreno, the successor to her boss, termed-out Democrat David Alvarez, to the eighth district city council seat. He was a beneficiary of ColRich funding as well. 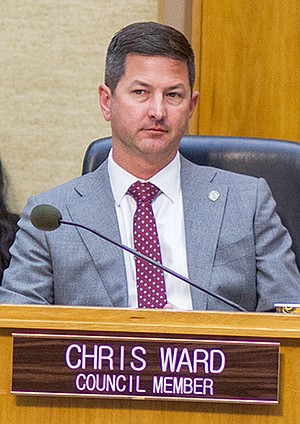 Councilman Chris Ward wonders why fellow politicians are content with free $7 meals, as he is.

One current and one would-be local legislator took advantage of the hospitality offered by the Barona casino tribe during the year’s first quarter, according to lobbying disclosures. On March 8, Assembly Democrat and frequent Barona diner Lorena Gonzalez stopped by for a free repast valued at $88 in Barona’s private gaming area. Democratic Assembly hopeful and current member of the San Diego city council Chris Ward got a more downscale meal worth $6.95 at the casino’s Sage Cafe, “with comfortable indoor and conservatory seating, and panoramic views of the beautiful valley and award-winning golf course,” according to Barona’s online write-up. Assemblyman Eduardo Garcia, Democrat of Coachella, picked up a free March 7 overnight stay at the casino hotel worth $89.

Would someone explain why we elect the City Atty or Tax Collector etc? These offices should not be political. The people interested in being the City Atty, etc. should apply and a panel of professionals should select the best candidate. All political offices are inherently corrupt. It is a profoundly stupid system.

Well, maybe. But those posts won't be filled by "a panel of professionals" at all. The panel that will fill those posts would be the city clowncil, which continues to hit new lows every month or so. At least the voters get to choose which corrupt candidate they want in those jobs, and not let the corrupt clowns of the council select them.

Yup, there is that.