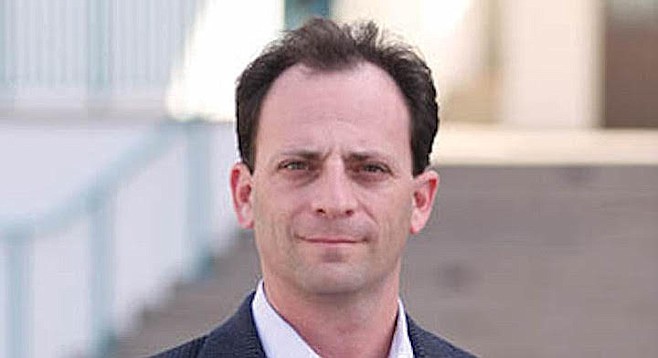 2020 fundraising by San Diego incumbents could surpass all records

The approach of the 2020 presidential election season heralds the beginning of a frantic fundraising time for San Diego city officeholders aiming to stave off reelection challenges next year with campaign war chests bankrolled by a daunting array of special interests.

First up is Democratic City Attorney Mara Elliott with an impressive four-event series before the close of 2019's mid-year campaign finance disclosure deadline, virtually sure to rake in thousands of dollars from the city's corps of well-heeled lobbyists and lawyers. 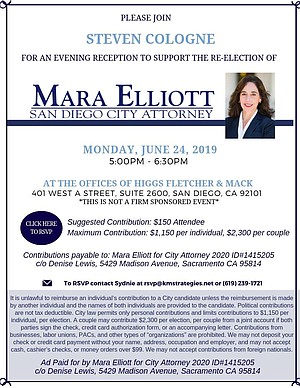 "The June 30 deadline is almost here and I need your help to ensure we hit our goal," says Elliott in a June 14 email to putative givers. "We have several upcoming events I hope you can attend."

Laing's current clients, according to her first quarter lobbyist disclosure report filed April 30 with the city clerk's office, include Greystar Rental Construction. The Solana Beach developer paid the YIMBY Democrat $8500 to advocate on behalf of Greystar’s controversial construction of a 20-story residential high-rise next to St. Paul's Episcopal Cathedral in Bankers Hill. 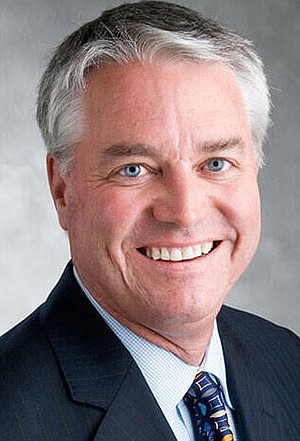 Two days later on June 21, La Jolla lawyer Ana Sambold provides the at-home venue for another Elliott fundraiser, and then on June 24, the action moves to the offices of the white shoe downtown law and lobbying firm of Higgs, Fletcher & Mack, though the invitation notes "this is not a firm-sponsored event."

Instead, Higgs managing partner Steven Cologne is doing the honors. He currently serves as the primary litigation counsel for San Diego Unified School District on a variety of claims in State and Federal court," notes his online bio.

Higgs isn't currently registered to lobby with the city, according to filings, but the firm has been using the services of Southern Cross Property Consultants to lobby on its behalf "to achieve compliance with civil notice and penalty." 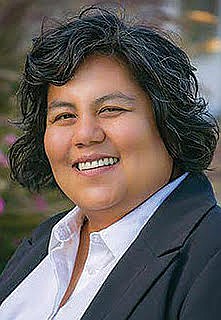 The April 2 filing goes on to say that Higgs, which paid Southern Cross $3325 for its services during the first three months of the year, is "seeking both an extension of time for compliance and a means of compliance short of vacating the premises," without specifying the address. Matthew Boomhower of Southern Cross lobbied Gary Geiler, of the city's Development Services department, the cryptic disclosure says. 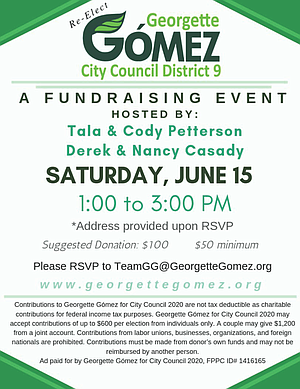 "You are invited to join hosts Tala and Cody Petterson, and Nancy and Derek Casady, for a fundraiser in support of my friend, San Diego City Council President, Georgette Gomez," says an email from House Democrat Scott Peters. "Please take the opportunity to come out and hear about Georgette's vision for a more sustainable and equitable San Diego, while enjoying food and refreshments."

For anyone unaware of how incestuous and seedy our single political party city is, this is a perfect snapshot illustration. Democrat and Republican labels are meaningless, as the developers and hoteliers own the complete set of each.

I fail to understand why the DA and City Atty are political offices. Why should we vote for someone to prosecute criminals etc? The positions should be applied for and applicants interviewed and the most qualified should be placed in that position. We elect political leaders to lead. Law enforcement should be left to the professionals same with other elected offices like Tax Collector et al.