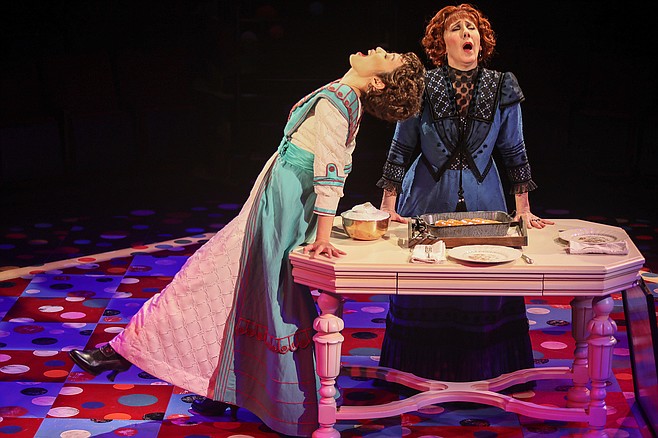 The scandalization of Steve Martin’s The Underpants

Merely invoking the word was deemed too suggestive for public consumption in the Berlin of a century ago.

The German satire Die Hose, by Carl Sternheim, depicts the aftermath of a Dusseldorf hullabaloo surrounding a lady’s undergarments having fallen down, in public. Predictably, some men are scandalized by the perceived immorality of it. Also predictably, other men are aroused.

That men are capable of two opposite, yet predictable responses to the appearance of ladies' bloomers creates a sort of dramatic tension that serves comedy well. It’s more nefarious in the real world. When first produced in 1911, the play actually had to appear under the innocuous title Der Riese (“The Giant”) because the name Die Hose was deemed too suggestively immoral for that era. As translated in Steve Martin’s adaptation — playing at the Old Globe until September 8 — Die Hose simply means The Underpants.

In other words, merely invoking the word “underpants” was deemed too suggestive for public consumption in the Berlin of a century ago. We might sit back and laugh at the thought. Or, perhaps we’d understand the connotation better with an alternate translation. To this day, some among us in America might likewise take umbrage over a play entitled The Panties, for example. I’m fairly certain modern day Germany has moved on.

Of course, call them what you will, “panties” is just a word used to describe more or less functional garments. Considering the bloomers of a century ago actually employed more fabric than some entire Victoria’s Secret catalogs, that both word and garment of that era could be construed as a symbol of sexuality speaks more to the fragility of so-called propriety. Is nudity itself so provocative a notion that the appearance or idea of underwear, explicitly designed to cover it up, ceases to become the gatekeeper to provocation and rather a provocation itself? Isn’t that a little like being turned on by a chastity belt?

Colloquially, most modern societies have conjured euphemisms to protect the innocent from graphic details of our reproductive urges and activity. But when the euphemisms themselves are taken as indecent, it suggests the most ardent defenders of propriety themselves may be the most easily corrupted by the symbols we adopt to reference sexuality. In other words, the rest of us can’t have nice plays named after underpants, because some people are too scandalized by their own dirty minds.