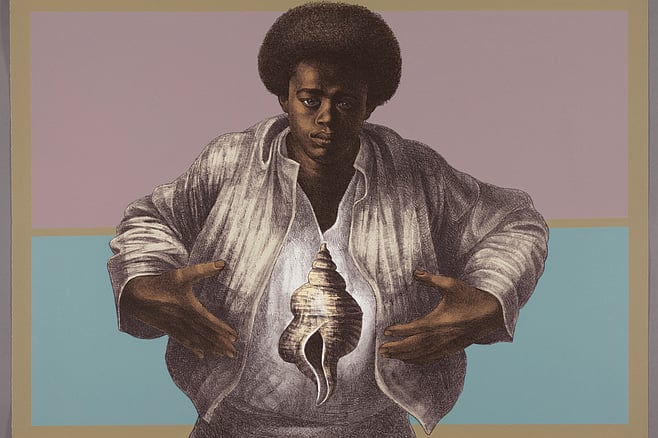 “Because he looked like my uncles and my neighbors, his achievements seemed within my reach.”

The African-American artist Kerry James Marshall, whose retrospective in Los Angeles I reviewed here in 2017, says that his mission and aspiration is to create “a grand, epic narrative with black figures in it.” The ambition was grounded in his training with Charles White, who during a long career taught hundreds of aspiring African-American artists. Marshall wrote one of the catalog essays for a capacious exhibition of White’s work now at the Los Angeles County Museum of Art, and he describes how he saw in White’s example “a way to greatness, and because he looked like my uncles and my neighbors, his achievements seemed within my reach.”

Marshall enrolled in the late 1970s in the Otis College of Art and Design in Los Angeles to study with White, who taught him that he should “always be engaged with history, the politics of your time.” White’s distinctions as an artist were fused to his vocation as a studio mentor and as a didactic, public voice speaking for and to the aspirations of African-American artists. He believed that good technique has to be bound to big themes and subjects. He had, Marshall writes, “a scholar’s interest in history” and taught his students to make work that’s “about things that mattered.” What mattered most was black history, black experience, black consciousness. 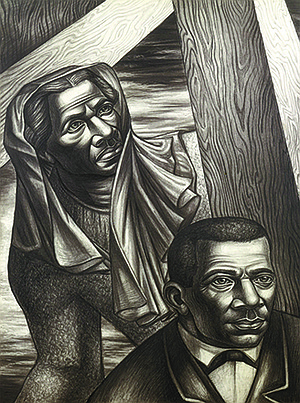 Born in 1918, White grew up in two cultures, north and south, Chicago and Mississippi. His mother, a domestic worker, would deposit her young son in the library for hours while she worked. By age seven, when she gave him a set of oil paints, White was already fascinated by art, though his high school teachers discouraged his interest in African-American history. His parents never married, and when his father died in the 1920s his mother married an abusive, alcoholic steel worker. Twice a year, mostly to protect White from his predatory stepfather, she sent her son to stay with aunts in Mississippi, where the city boy learned about African-American history and folklore. He was already living a kind of folklore in Chicago, where during the 1930s and 1940s blacks who arrived during the Great Migration were affected by housing covenants that shut them out of white neighborhoods and caused many to live with minimal amenities in tight quarters called kitchenettes. In a painting from 1939, Kitchenette Debutantes, two bosomy women slouch out an open window, casually offering their bounty. They’re “coming out” in their own way, and the picture is an early statement of White’s constant theme: black bodies.

By age 21, White was an actively political artist who said he was “interested in the social, even the propaganda angle in painting.” He had already worked on WPA murals for the Illinois Art Project, developing what would become his signature form: a vigorous iconic rotundity that pushed figures forward, almost plaintively, hands first, usually meaty muscled hands, as if they were the primary tools of resistance. He knew the work of the Mexican muralists Diego Rivera, David Alfaro Siqueiros, and José Clemente Orozco, and got to see their work up close on a trip to Mexico in 1946, when he was already inquiring into the relation of the masses to the individual. In his mural Struggle for Liberation, intended for the Chicago Public Library but never installed, White congested the frame with figures — preachers, singers, politicians, laborers, a lynched black man, another manhandled by a cop — fused or linked to each other but with identifiable singleness within the amassed humanity.

White welcomed the tag “social realist” and was gratified to have his work discussed in Marxist publications such as The Daily Worker and Masses and Mainstream. He heroized African-Americans past and present, anonymous and famous, and made potent images of Harriet Tubman, Sojourner Truth, Frederick Douglass, and Nat Turner; he also made portraits of African-American hero-entertainers like Eartha Kitt, Sammy Davis, Jr., and his longtime friend Harry Belafonte.

White absorbed and transformed the masters who came before him. One of my favorite early pictures, Card Players from 1939, comes out of Cézanne’s Card Players and Van Gogh’s Potato Eaters. Each of the four players shows a skepticism towards his cards, towards the game itself. The picture is stylistically anomalous in that it looks almost improvised, and its robust, broken colorism carried over into work of the early 1940s, pictures like the beseeching male in This My Brother, and Hear This, where one man exhorts another to read a newspaper. The figures’ bulky hands are prominent, and White uses color to intensify and enliven intimacy, whether with God or with another black man.

White’s great gift and passion was drawing. In the oil paintings you don’t see him pushing paint around so much as configuring outline and filling out figures with superb draftsmanship. There’s no anxiety or instability in the forms. His drawing had a voluptuous elasticity that makes the work look swept into form. The graphic work — pencil, ink, crayon, charcoal, lithography, linoleum cuts — has a poised velocity. The paintings brandish their origins as sketches: the cross-hatching and parallel swooping of long sleek lines look like an exoskeleton. You can go through the show doing nothing more than observing how White shaped the drama of his figures and groups by expanding or contracting the grain of the figures. He turns his whippy line into a political instrument. In a 1946 ink drawing The Return of the Soldier (Dixie Comes to New York), a New York cop shoots at three black men; behind the cop, urging him on, is a full-dress KKK-er raising a torch. It’s historically accurate and appalling: African-American WW II vets came back to an America that didn’t really want them around. There were lynchings, and discharged black soldiers in towns all over the country were attacked and murdered.

In 1946, when that picture was made, the Great Migration was still underway: during the following decade the black population of Southern California doubled. White himself migrated from New York to Los Angeles in 1956. Wherever he landed, he taught; it was a calling and a political-social mission. In 1965 he was the first African-American to be hired by Otis. Marshall wrote that White taught them that “your work should be in the service of helping to dignify people.”

White wanted his work to implement knowledge of history. His artistic practice was one with his didactic, political purpose. And his work is filled with images of dignified woe, sometimes an astonished rage.

In 1964 he responded to the Ku Klux Klan bombing of a church in Birmingham that killed four girls with the emotionally complex Birmingham Totem. Atop a mound of wooden rubble sits a nude black man dangling a plumb line as if in preparation for rebuilding, or as a way of re-establishing a moral compass. He’s covered by, en-wombed by, what looks like an African textile. The many wombs and fetuses in White’s work track black experience to its physical beginnings. Black male bodies in his great Wanted Poster series of the late 1960s are collapsed at the waist to suggest not just fetal life but also mastered and indentured bodies in the holds of slave ships. He derived his motifs from nineteenth-century newspaper ads that advertised slaves for sale, and wanted posters for escaped slaves that appeared everywhere, north and south. White embeds men, women, swaddled babies, and cowering children in rucked, washy sepia fields of bladed folds that create a matrix of suffering and endurance, the surfaces stenciled with the kind of information wanted posters carried: name, age, legal status, monetary worth.

White, who died in 1979, was a greater graphic artist than painter, I think. The paintings tend to plump up toward illustration or exaggerated feeling. The graphic work is leaner, hungrier, angrier. He was always aware of the propaganda value of his work, but I don’t think of it as propaganda so much as a necessary proselytizing of black freedom. The purest expressions of his draftsman’s gifts are also the starkest. His etching Cat’s Cradle shows a seated boy with lines strung from feet and hands to the wall over his head: play has snared him in its own entanglements. His body is literally strung out, and the string triangulated above his head suggests an imprisonment and bondage difficult to escape. He looks sadly puzzled to find himself trapped in the matrix.