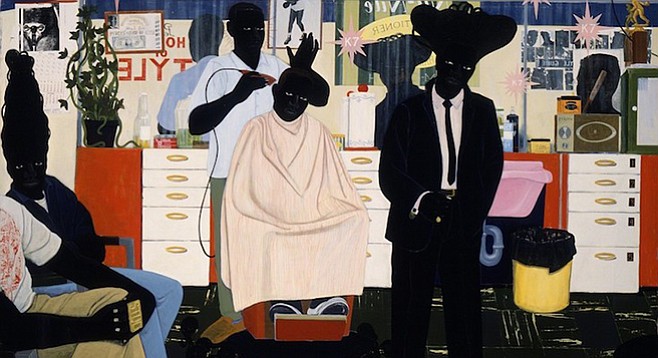 We’re the violators of their culture of leisure.

Slinky, unfurling forms run around and through many of Kerry James Marshall’s paintings. They frame individual pictures’ contents and rope together serial canvasses into a narrative of styles and scenes. In his 1993 De Style, a barber shop (“Percy’s House of Style”) is crowded with African-Americans sporting regal, extravagant hair: on one man’s head sits an afro mass shaped into topiary wings, a girl balances a tangled hive of piled braids, and, cropped so we can’t see his head, a waiting customer wears a chunky golden “STUD” knuckle plate. Behind the braid-hive, a houseplant mimics its twisty form, and the red cord of Percy’s electric clippers repeats the cord draining from a wall clock mantled, high in the picture, by a snaky water hose. 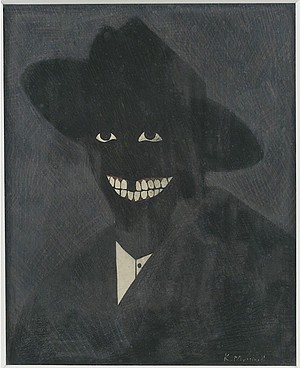 A Portrait of the Artist as a Shadow of His Former Self, by Kerry James Marshall

I’m piling up details because the crunched, crisp visual information rubs drily against the historical source of the title, early modernism’s de Stijl movement and the angular rigor of its most famous child, Mondrian. Like so much of Marshall’s work, the picture tiles together artistic tradition, contemporary African-American life, and the history enfolded in that life. In his tonally complex and lyrically ambiguous compositions, we see traditions being lived into by a black artist whose subject is blackness and whose intent isn’t to persuade or provoke. The work says: this represents life. A big, broad-shouldered overview of his career in now on view at the Museum of Contemporary Art in Los Angeles. 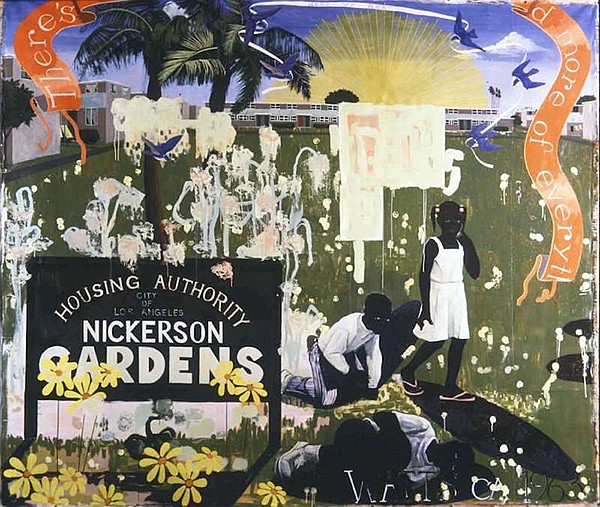 Born (in 1955) and raised in Jim Crow Alabama, Marshall moved with his parents to Los Angeles in the closing years of the Great Migration and lived in a Watts housing project called Dickerson Gardens, a thriving, tranquil community of two-story townhomes, extensive green space, a gym, and a toy and book library. Nineteen-sixty-five marked a turn: the family moved to a house in South Central, down the street from Panther headquarters (and the barber shop that inspired De Style, which was owned by a local barber); Watts rioted; Marshall entered fifth grade and was already drawing; the Los Angeles County Museum of Art opened and the boy made his first visit there. By seventh grade, he was taking classes at Otis Art Institute, where he later took his B.A. He began showing his work in the late 1970s and 1980s. By then he was living, and has since lived, in Chicago.

Marshall’s ambition was an American mission huge in specific ways: he wanted to make great pictures, purposely destined for museums, about black people. He said he missed in museums “a grand, epic narrative painting with black figures in it, and that’s the kind of painting I became interested in making — pictures in the grand manner.” He aspired to make history pictures, portraits, genre scenes, love idylls, nudes, and landscapes, with a passion to intervene in the endless museum representations of white people. After some early abstract and collage work, he pitched himself into painting the figure and by the 1980s was pursuing a more forceful clarity of presence and practicing an imperious figurative energy. “The image as a force,” he said, “has to carry the responsibility of making a picture work. That is what has to produce the feeling of awe.”

In the early 1980s, Marshall read Ralph Ellison’s Invisible Man. It fixed a lifelong preoccupation with what he calls “the notion of being and not-being, the simultaneity of presence and absence.” His small painting, A Portrait of the Artist as a Shadow of His Former Self, marked his coming-into-consciousness: a grinning black face, big bright teeth set off by a black tablet where a tooth once was, a field hat, jacket, and black eyes set in mothy sockets. The image is saturated with Ellison’s idea of there-ness and not-there-ness. The visual force of the man’s blackness is set off by his “code-smiling” countenance, the Jim Crow, white-man-pleasing expression, with its unseen veils of minstrelsy and slavery. Marshall’s former self was in the process of being re-made: the blackness in his work would be defiantly casual, confrontationally ordinary.

Marshall spent his young life in housing projects that he memorialized as an almost prelapsarian interlude before cities burned. His several “Garden Project” pictures are urban pastorals that mix gladness and melancholy. One of them, Watts 1963, jostles mixed pictorial and emotional tones. Bluebirds of happiness drape the scene with proscenium-arch bunting (a version of the wiring, wreaths, piping, and vines that “present” most of Marshall’s large works) like a blessing or civic commendation. Banners waft boosterish real-estate claims: “There’s more of everything.” That must have been the feeling cherished by residents, but the message is ominous, now that we know how dreadfully the “more” of certain things damaged those communities. Three children sprawling on the green enjoy the eerie calm. But all’s not right: among the palm trees is a disordered garden of overgrown stalks, tangled blooms, and scattered daisies and dandelions. The good life is threaded and bounded by wilder, menacing energies.

The classical, museum formality of Marshall’s art is mined with disruptive social-racial energies. The backward-glance Past Times is modeled on the leisurely bucolic imagery of the Fête galante, the French Rococo depiction of country delights enjoyed by city folk. Against a high-rise project in the distance are set a country lake and greensward. A speedboat and water skier zoom past; on the lawn, a father drives a gold ball, the girl plays croquette, the mother opens a picnic hamper while she and her boy harken to boom boxes that pay out sheet-music strips like ticker tape, their lyrics — “it’s just my imagination,” “money on my mind” — streaming like hopeful social hymns. Around them squares of abstract art hang mysteriously in the scene like DNA markers. The black family’s faces are shut down. They look us in the eye and don’t welcome our presence. We’re the violators of their culture of leisure. They’re in the cone of their (racial, urban, familial) culture where trespassers aren’t welcome. Bluebirds oversee this scene, too.

African-American portraiture is just what it is, portraiture, and as such is inflected with historical and contemporary race consciousness. One of Marshall’s series is made up of pictures of artists looking intent and aloof, addressing us, addressing their work. In some they’re holding palettes the size of desk tops and are working on paint-by-numbers self-portraits. The paint-by-numbers kits popular in the 1950s were abstract, predetermined masterpiece maps. You didn’t buy a kit patterned in your own image. Marshall’s artists are working on picture-identities that are appearing and disappearing at the same time. The pictures are recipes of presence. They’re a rudimentary, Invisible Man–channeled version of the “painting structure” Marshall is so passionate about. He makes this mechanical exercise in picture-making into a subtle essay on black self-perception and destiny. The partially executed compartments compose a sectional topography of one kind of constructed, museum-ized self. These paintings are about the messy palettes of life and the formed abstraction of “identity.” A very different action happens in Marshall’s variation on Velázquez’s Las Meninas, that great essay on the porousness of life and representation. In Untitled (Studio), four figures look away from each other: a nude male model in the background, another changing behind a drape, the (female) artist posing the sitter, and the sitter herself, whose patchy in-progress image on the canvas is just barely coming into form, into image-completeness.

Marshall’s career has been an ongoing act of historical redress, to make endless provision for the absence of black bodies and black culture in museums and in the taxonomies created by curatorial agents over the centuries. His means and materials have been summative and forwarding. Some early work is made with the exacting, time-consuming technique of egg tempera, and he has always liked “pushing the paint around,” as he says, but Marshall has also used the pictorially ripping, cut-across-the-grain tactics of collage, and in later pictures he applies glitter in long ribbons, swathes, blotches, and decorative deposits, as a signature bling-y motif. One image features a sailboat and its giddy crew framed, like the title sequence of a fantasy movie, by ropes and nets of gritty, granular glitter.

I sense a vague, unmeasurable weight of broody anxiety mixed into serene, even whimsical reveries in a lot of Marshall’s work, especially in his erotic and sacred paintings. Could This Be Love is fraught with the greediness of sex: a woman alluringly pulls off her clothes in an erotically primed bedroom (naked black Venus statuette, melting candles, a garland of staves draping the scene with lyrics — “I’ve got two-oo lovers and I love them both the same”) while the guy puts his hand down inside his briefs. Marshall has also made domestic interiors that are really worship environments, housing shrines to Martin Luther King, Malcolm X, the Kennedys, and other historical figures white and black who for earlier generations were talismans of representation and liberation. In one picture, a woman tending a vase of flowers wears glorious glitter angel wings. Other pictures are darkened by history and mystery religion, especially voudon. The most memorable is a portrait of Nat Turner. It’s a tacky truth, but no less true and real, that magical images of saints appear in house windows, on water, on trees or stones. Turner’s revenant emanates from a beaten-up leather case, looking mournful, righteous, and still angry. The slave rebellion he led in 1831 killed over 55 people; in retaliation, local militias murdered roughly 120 blacks, most uninvolved in the rebellion. After his capture, before being tried, convicted, flayed, beheaded, and quartered, Turner replied when asked if he had regrets for his actions: “Was Christ not crucified?” Marshall’s vision bounds up the historical agonies of African-Americans with a piety inseparable from the religious imagination.