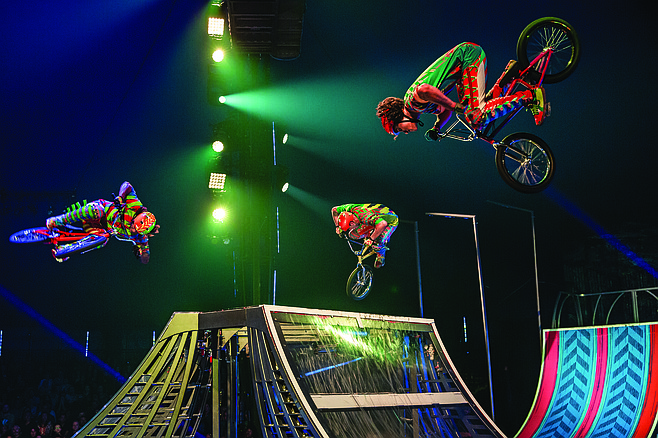 Are gymnastics even really a sport? Is freestyle cycling?

The touring Cirque du Soleil show Volta performs at the Del Mar Fairgrounds until May 5. Coloring a loose, dystopian future narrative with ballet, aerial acrobatics, and freestyle bicycle stunts, the show presents a bit like Ice Capades, except with gymnasts, X Games athletes, and unicyclists instead of figure skaters.

Even more than the traditional circus, the Cirque brand excels at combining stunning feats of athleticism with thoughtfully rendered artistry. It got me thinking: if this is the line between sports and performance art, are gymnastics even really a sport? Is freestyle cycling?

At the top level of gymnastics, athletes strive for perfection while executing ever more complicated flips, twists, and landings, and the most successful performance receives a gold medal. But unlike most competitive sports, the action itself does not objectively determine the outcome. Rather, a panel of human judges subjectively evaluates each routine, including points for artistry. Respective scores are compared, and a winner declared, but the gold and silver medalist never even go toe to toe. This sort of adjudication strikes me as closer to organized art criticism than sport. It’s like comparing two productions of the ballet Swan Lake and declaring one a winner.

To be a sport, doesn’t there need to be a competitor specifically trying to keep you from winning?

Look at football, for example. A football offense rehearses a play over and over again, practicing detailed choreography and precision timing to coordinate eleven athletes toward a prescribed outcome. Without a defense on the field, the players would be re-enacting their well-rehearsed parts, scarcely different from those ballet dancers. Just as Swan Lake has the same ending every time it’s performed, a well-prepared football offense would score a touchdown on every single play if there were no opposing team to stop it.

It’s the act of putting an 11-player defense on the other side of the field that makes it a sport rather than an athletic demonstration. It’s what makes a game’s outcome unpredictable. Conversely, if you sent a second team of dancers to prevent the cast of Swan Lake from landing their grand jetés, ballet might be turned into sport.

I don’t mean to diminish the competitive fire that drives gymnasts, or other judged athletes such as figure skaters, divers, and freestyle bikers. Quite the opposite. I would elevate them to the stature of performance artists, so committed to their craft that they refine their very bodies to use as implements of expression.

Acrobats, a.k.a. gymnasts, arduously prepare themselves to perform the same dynamic athletic feat to perfection every time. There’s no competitor to stop them, other than their own conscious or subconscious minds. In other words, they face the internal struggle of every artist. And the very best perform their art at an Olympic level.