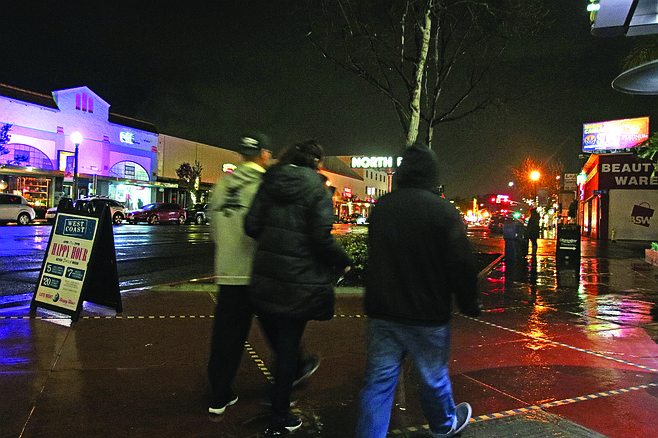 In defense of Susan Davis, in praise of Bruce Henderson

Does it take a very white voice to get cops to show up?

About a letter by Joseph Carmellino (“Backyard Intrusions”, Letters, March 27). In his letter he says that “on several occasions I have had to call the cops. They showed up in force promptly and promptly caught someone.” So, I don’t know how he gets cops to show up. I can’t get cops to show up in my neighborhood of City Heights. They asked me to come in and fill out the police report. So, does he use like a very white voice to get cops to show up? Don’t know what his trick is. So if he can let us know what that is, very much appreciated. 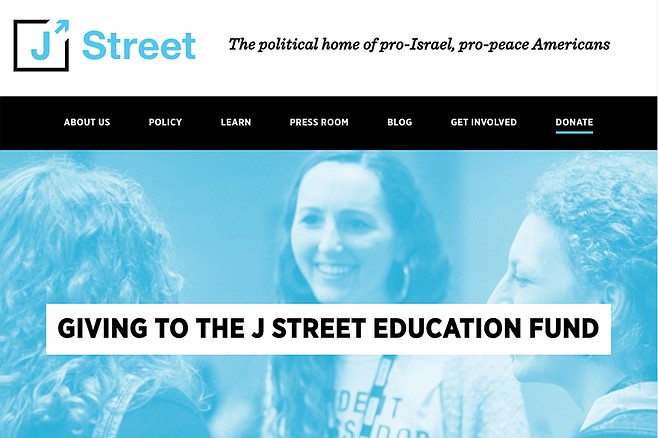 As a resident of Susan Davis’s district and a member of J Street, I am deeply grateful that Congresswoman Davis devoted a week of her hectic schedule to participating in the J Street Education Fund’s congressional delegation to Israel and the Palestinian territory. Hardly a “junket,” as Matt Potter described it (“Susan Davis returns to the trough – in Israel,” News Under the Radar, April 10), this was an intensive, highly nuanced working trip in which a typical day ran twelve to fourteen hours. The itinerary included meetings with key figures in the Israeli and Palestinian governments, as well as leaders working to promote cooperation in business, civic, and educational realms. The U.S. has historically been a broker for peace and an advocate for a two-state solution for the Israelis and Palestinians. I deeply appreciate that Rep. Davis took the time to become better informed about this volatile region of the world. 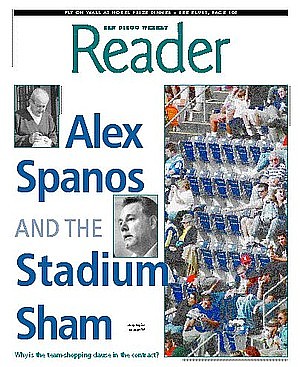 Everyone who is still broken up about losing the Chargers needs to read Matt Potter’s December 1999 article in the San Diego Reader, “Alex Spanos and the Stadium Sham” (Cover Stories, December 16, 1999). I ran across the article this morning, nearly 20 years later. Bruce Henderson and Potter remind us that the Spanos family and the NFL NEVER intended to stay in San Diego. Los Angeles was always the goal.

The Chargers and the NFL started setting us all up 20+ years ago... and lied about it from the beginning. Even back then, they included Section 31 in the contract with the city while, at the same time, claimed they never intended to leave San Diego.

The city council was happy to oblige... and extremely naive. Alex Spanos was a key contributor to city political campaigns. That bought him sweetheart deals like the ticket guarantee, new facilities, Qualcomm Stadium upgrades and Section 31 of the Chargers contract with the city. All the while, the council was buying into lies that the Chargers didn’t intend to leave.

It all went down almost exactly as Potter and Henderson predicted (just a few years later). Houston got an NFL franchise before Los Angeles. NFL billionaires gave the Spanos family the option to move to Los Angeles. The Spanos family DEMANDED a comparable deal--a $1B+ stadium downtown they hastily pulled together knowing it was NEVER going to pass (let’s not forget that, out of nowhere, re-development of the Qualcomm Stadium site was no longer an option for the Chargers). We should also remember that the Spanos family put an undeniably bad product on the field year in, year out. And then they had the arrogance to claim that the city didn’t support the team. That is equivalent to a movie theater playing nothing but box-office bombs and then the owner crying because nobody wants to spend money at his theater. I applaud more recent city leaders for not caving to the Chargers demands. Now, when the NFL and the Chargers want back in, the city and county will be in an infinitely better position to negotiate. And they will want back in. It’s basic math. San Diego County and Northwest Mexico represent a meaningful, lucrative market that the NFL has completely abandoned. Worse yet, they insulted the hard-working people of San Diego on their way out the door, likely eating into whatever remaining revenue stream remained. Plus, it’s not lost on NFL owners that the (now defunct) Fleet were growing in popularity. This is probably the real reason NFLPA killed the AAF. Follow the money. The article published nearly 20 years ago proves that the Chargers have always played the people of San Diego for fools. And continue to do so through their employees, like Philip Rivers and Ladanian Tomlinson. Believe behavior, not words. Rivers and Tomlinson NEVER advocated for the hard-working people of San Diego. Neither of them stood with us. Both have consistently advocated for the Spanos family and their stadium plan. They behave like good employees, not concerned members of our community. Thank you, San Diego Reader, for always keeping it real.