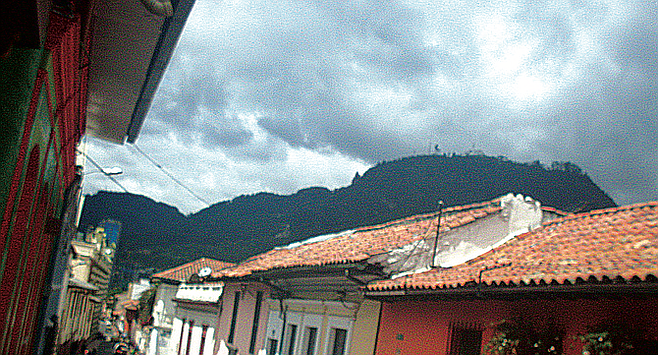 Those are some of the stereotypes, right? Well, although these problems haven't completely vanished, things have definitely improved to the point where most major cities are safe for foreigners to visit.

What to see and do in Bogota

Bogota is Colombia's largest city and capital, and surrounded by lush greenery and picturesque mountains it makes a dramatic first impression upon flying in. The airport is large and modern; stepping outside, the cool mountain air is crisp and invigorating. Taxis to the main tourist and hotel districts of Candelaria and Chapineiro are reasonably priced. And there's even Bogota's internationally famous rapid bus service to take you there for a fraction of the cost (if you don't have too much luggage, that is; it can get super crowded depending on the time of day).

However, after this positive experience upon arrival, the traffic-choked boulevards made me question, "What the hell am I doing here?" In addition to the aforementioned rapid buses, there are also countless, ancient, semi-legal mini-buses circulating the city, constantly spewing a thick black smoke. Much of the architecture along these wide boulevards is totally hideous. While the Bogota climate is notoriously overcast, and today was no exception.

Reaching the Chapinero neighborhood where I would be staying as a late-afternoon downpour began to fall, my taxi driver overcharged me because HE got lost (!!!) finding my hostel. But my anger passed, as did the stormclouds in the sky above — and from here on, my experience with Bogota and its people was extremely positive for the most part, with the vast majority of locals being very receptive and helpful.

One of the highlights was a graffiti-art tour that I did in the Candelaria neighborhood the following day, run by a local guy who calls himself "Jeff." He also explains the politics and sociology behind the artworks, revealing plenty of fascinating information (in English). His tour is becoming quite popular, as there were around thirty people in my group. However, his claim about it being "donation-based" is a little misleading; he says that 20,000 to 30,000 pesos is the "average" tip that he receives per person. Although I would recommend the tour 100%, feel free to tip whatever you feel reasonable, regardless of what he "expects." 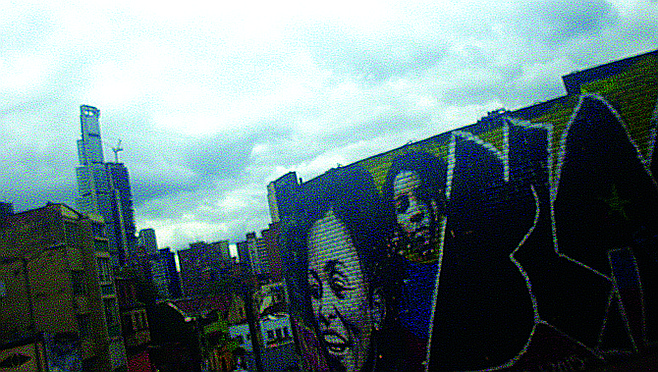 Graffiti mural in the Candelaria neighborhood.

While you're in Candelaria, this is a great area to just wander around and explore the historical architecture and colonial streets, including some that run up hillsides, offering spectacular views the higher you go. But also a slightly higher risk of crime: above Candelaria proper, are various comunas (slums). With common sense, it's safe enough (during the daytime at least).

Lower down at the bottom of the neighborhood is the famous Plaza Bolivar, a vast, open square and a great place to simply hang out and people watch. I also sampled a traditional Colombian coffee with a dose of Bailey's. Delicious!

Other areas of note include Chapineiro, a well-off neighborhood where I stayed. There are plenty of bars and restaurants in its northeastern section, while in its southwestern section – in between the ugly traffic-choked boulevards of Carrera 7 and Carrera 13 – are quieter streets, with more obscure, alternative bars and restaurants and shops, kind of hidden away.

As a reference point, walk south from Plaza de Lourdes along Carrera 9 or 9a, and just by spontaneously wandering, you'll find plenty of interesting stuff. As for the plaza itself, it contains (adjacent to the church) a funky coffeehouse where, again, you can sample Colombia's famous caffeine blends.

Around the corner from here is a series of random bars of dubious nature, with hustlers attempting to summon customers. I never quite figured out what the deal was, but they looked interesting.and fun (albeit slightly sketchy) and piqued my curiosity, although i never had the courage to actually enter any of them.

Would I recommend Bogota? If you're already in Colombia visiting other destinations, then Bogota is definitely worth your time to truly understand an important aspect of what the country is about. Otherwise? More a destination for urban-explorer types such as myself, but probably not for everyone. I did notice a decent number of foreign tourists from the US and elsewhere, though, so I guess the reputation of the city is increasing... as well as that of Colombia in general.

Cartagena and Medellin would be considered more beautiful than Bogota and more tourist-friendly also (especially Cartagena). But if you have time to do all three of these cites, then go for it – the contrast between them all is quite interesting.

"Would I recommend Bogota?" Is a rhetorical question! If the city is described so mentally that everyone who reads begins to think about this place. I really liked the article, so warm and at the same time clear. And of course, I also think about spending some time there. Hang out on crowded streets, sit in a cafe, drink local coffee. I especially would like to plunge into the culture of tea Mate, I read so much about it. Buy swaying and bombing yourself as a souvenir. Thank you for the article. I know for sure now where I will go next time.

I've been to Colombia 6 times and I'd highly recommend it. The first time was in 1998 when there was a do-not-travel advisory. Each time though, I was surprised and glad about how friendly and honest the people are, nothing like the Miami-Vice stereotype. The food is amazing- all fresh and delicious. Make sure to get an Arepa con todo from a street vendor. And have a bowl of san chocho de gallina. If you go to Bogota, don't miss the salt mine outside of town, spectacular. Also go up to the Monserrate, has views of the entire city and is gorgeous. I would also highly recommend some days in Cartagena, make sure to eat the cazuela de mariscos and also arepa from a street vendor again! By the way, Uber was very good in several cities.