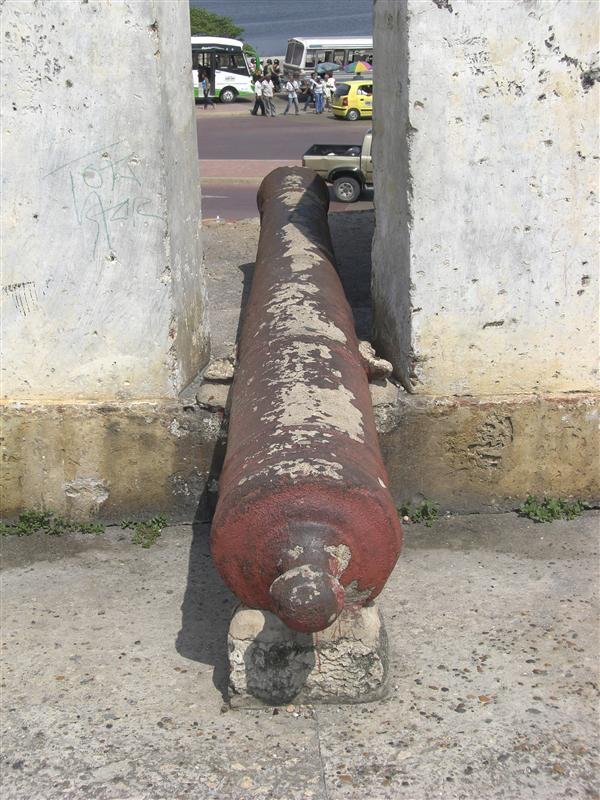 Cartagena: The Most Interesting Man in the World

And there he was. The most interesting man in the world. Better yet, he was the encapsulation of the advertised Dos Equis man: someone who bathed with piranhas, dodged bullets, drank gasoline, and combed his beard with porcupine quills.

I happen to cross paths with this character on an uneventful muggy night in Cartagena, Colombia.

I had just finished dinner, weaved my way through the Getsemani District and was buzzing the doorbell of my hospedaje when I noticed a figure through the squares in the criss-crossed black gate. His eyes stuck out at me immediately like blue crystal balls, appearing to resonate the vision of a harsh past and wisdom of a Tibetan monk.

At midnight, slouched back in a chair at the front desk of the hospedaje (in my experience: similar to a hostel, but usually run by a local, less touristy and more homey) he was firing fluent Spanish at the Colombian owner over a cold cerveza.

Every couple of seconds the owner would break into a raucous bout of laughter, reach over to slap Mr. Dos Equis’s knee and the talk would continue. As I darted up to the side of the front desk to grab my room key, the man's narrow intelligent eyes gave me a look over. With only the bottom button of his shirt buttoned and his khaki pants rolled halfway up his calves, this man gave off the aura of a sophisticated Ivy Leaguer, the confidence of a gigolo, and slippery secrecy of a CIA spy.

Unexpectedly, he started conversation with me as I grabbed my room key, claiming he had overheard me talking about a town called Santa Marta earlier in the evening. Hmm, strange, he must have been quite the eavesdropper because I sure as heck hadn't seen him before. From the looks his name might as well have been Rambo Sr., yet unpredictably as I started conversation with him he dished out a suburban-like name of "Brian." His name, along with his aura (and I would soon learn his stories), made him a true oxymoron.

"Santa Marta you say. You want to go there? I've been there a couple of times. Just make sure you stay in the right part."

He pauses for a few seconds, breaks eye contact with me, looking off into the night and says with a misty aura of confidence, "I actually have a house there. I've almost completed it with my bear hands."

Then it was his whole gig about what he did for a living. He made maps apparently. Brian somehow traveled as a topographic landscaper for a GPS systems company. The lucky bastard was able to travel the world doing it. He soon began to tell me a number of stories that would soar to the fringe of adventure and sometimes, near death.

He'd take a swig of beer and proceed, "Or the time I was locked in a paddy wagon in Mexico City about to be executed for simply being in the wrong part of town at the worst time and my Mexican compadre had to break the side window while the both of us scurried out still hog-tied." All the while he's shaking and his eyes are glossing over as he's telling me.

"Or when my Colombian girlfriend tried to stab me for building her a house without a large enough bathroom (apparently he was also quite the carpenter),” he says with a wry smile. He then rolls up a sleeve, producing a scar that resembled a shark bite. Jesus, I think. This man is no joke.

Or when he was kidnapped near Rioacha, Colombia, (northeastern Colombia, near the border of Venzuela) on an assignment to make a map of the area with the same Colombian girlfriend and escaped.

To top the escapades off he concludes, a couple years back a bunch of young Israelis rented a massive villa, piling in kilos of cocaine and prostitutes. Brian happened to be living down the street at the time, saw the young age of many of these girls, and reported the events to the authorities. A door was kicked in. Young girls, copious amounts of cocaine and weapons were found. Brian, the gringo, became a local hero and was given the title of having been responsible for the largest documented drug bust of any foreigners in Cartagena history.

This man was a humanitarian, bulldog for the good cause and had a stream of endless stories that could go on long after the last embers of the campfire vanished.

"Oh yeah,” he says sardonically. “I was fixing that bathroom of the house I built for my girlfriend in the shadier part of town, when I walked to my neighbor to borrow a ladder, and I found my girlfriend in his bathroom. Go figure!"

Colorful Cartagena is an architecturally diverse, labyrinth-maze of a town, tucked along the northern Carribean coast of Colombia. After enslaving the local indigenious Sinu culture and ransacking most of their gold, the Spanish made a name for Cartagena as one of the largest stockpile of riches along the entire Carribean coast.

According to Brian and so-called "legend" from the beginning of 16th-century Spanish colonial rule, the fortress-like city was used as storage grounds for large amounts of gold that the Spanish conquistadors had accumulated throughout the Carribean.

Soon, word got around and pirates began to steal the gold and send black-flagged fleets to Cartagena to rape, pillage and burn all they could. Moreover, French and British fleets sent some of their top maritime infantrymen to Cartagena in hopes of gaining riches and controlling the well-located port.

In defense, the Spanish invested heavily in protection by erecting large 60-foot walls, so that the pirates would have a tough time attacking the city. Every 100 feet, sticking out of these large stone walls were cannons three times the length of a grown man, aimed and ready to defend the Spanish gold.

Thus, a walk through present-day Cartagena reveals many buildings of Spanish-colonial design.

The evening sun brings to light shadows of shirtless men poised in white, plastic chairs under colorful colonial balconies of red and green. Balconies overlook the narrow streets below. Evening approaches, and families gather the sidewalks to give the day one last look over before they retreat into the sticky air of their small shared houses.

Colorful fruit lines old wooden rectangular crates, as vendor speak up at me through sun-weathered eyes. Two men sit on wooden crates in the middle of the sidewalk, playing a game of chess, as their buddy jovially hoots and hollers in encouragement.

Behind me, scattered shadows lurk. Small chuckling children pull on the tail of my shirt, opening their tiny hands in hopes of receiving a peso or two.

And all around me, the streets fill with the churning soup of Colombian culture: toothless vendors advertise sweet papayas, a woman stands rocking a baby back in forth in one hand, and bayonatte music (slower version of salsa) blares out of old cracked speakers while old men tap their feet and young Costeño (peoples living along the Caribbean coast) women shake their hips to the pulsating beat.

Excellent Kip !!! Been to Cartagena and your description is right on. As before---Keep'um coming amigo KUDOS !!!