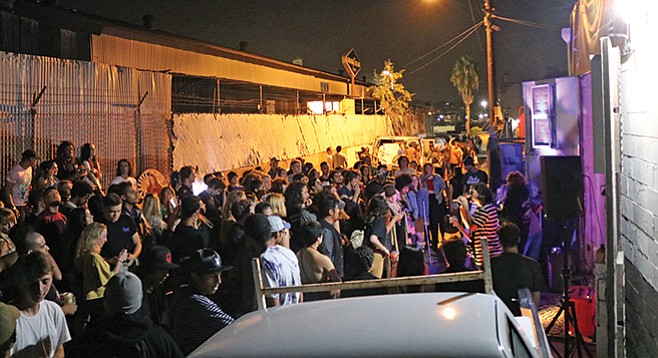 Adrian "Marty" Martinez sings and plays bass in Vietnam Hardcore, a punk trio based in his native Vista. Late last year he was fed up that North County had become a wasteland for live shows.

“There was the Bluegrass House in Vista, the Metaphor Café in Escondido, the Lavender House, the Hellfire House… they all stopped doing shows or got shut down by the police. We were tired of playing the middle of nowhere in El Cajon where they would charge $15 at the door and no one would see you. We wanted to represent Vista and North County.”

So he took the DIY plunge and made a venue out of the back of his grandfather’s El Mago — the magician — auto body shop near downtown Vista.

“We had used that paint room as our band practice space,” Martinez explains. With some help from friends, they turned it into a no-cover venue for all age music fans who don’t mind standing in an alley to watch a show. “We borrowed lights and a sound system. We had no idea what we were doing but it worked out perfectly.”

That first three-band show in December drew about 20 fans. Since then, Martinez and his DIY promotion group has staged some 15 shows at the industrial showcase commonly known as the Paintbooth. “Everyone is welcome.... We want to provide opportunities for people of color and for bands who find they are in the same boat as us: they have no place to play.”

Martinez says he features the works of a graphic artist at each Paintbooth show, which may include a night of hip-hop, metal, punk or indie bands. He currently books three or four shows a month on a Friday or Saturday. Martinez says the bands happily agree to not having a pay guarantee. There is no cover charge, but donation collections and merch tables are welcome.

The Paintbooth space is located between two skate parks operated by the city of Vista. Martinez says that usually works out well since rockers who skate can get in a few runs after they play, or skaters can check out the bands.

But at one recent show, Martinez says a skater vs. skater brawl drew sheriff deputies. “The cops showed up for a fight that broke out down the street. They were looking for a guy who broke someone’s nose. They caught him, but it stopped the music for 30 or 45 minutes.”

Clay Wahlstrom plays bass in Mindless Aggression and drums in Victimized. Both hardcore metal bands played at a six-band Paintbooth show he put together September 15 that included Carried Weight from L.A. and Activist from Orange County.

“I just wanted to put something together, because I haven’t seen anything going on in North County as far as shows,” says Wahlstrom. “I like smaller DIY venues like this. I like the intimacy factor.”

“My goal is in the next year or two find a new spot in North County, but I want to keep the same DIY, all-age aesthetic of the Paintbooth,” Martinez explains.

“We’re calling our Halloween show [on October 27] the Auto Body Experience. We’re going to have zombie actors and the Nomads from Oakland.”