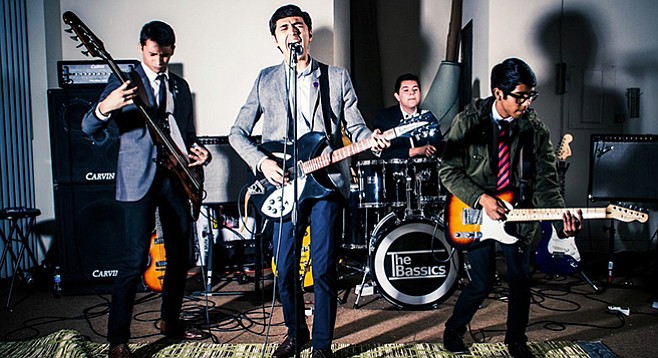 The Martinez brothers say their cue to start their band was an omen.

“We found these two guitars sitting right outside a neighbor’s fence,” says Sam Martinez, lead vocalist/rhythm guitarist of the Bassics. “It was like somebody wanted to give away old stuff. We kept going back there all day. Nobody claimed them, so we just nicked them. It was like it was a miracle.”

Sam, 19, and his bassist brother Vino, 21, say that was the beginning of the Bassics, a mod-conscious quartet from Imperial Beach.

“One was a Les Paul Epiphone. The other was a nameless heavy-metal guitar. We fixed them up and learned how to play. We used to take the trolley and go downtown to busk to save up to buy the parts and equipment we needed.”

Sam says the inspiration to play rock in the first place began a few years earlier. “One of my brother’s teachers at Mar Vista showed Help! by the Beatles in class. That did it.”

The Bassics (which includes drummer Carl Mendez, 18, and guitarist Nick Pineda, 16) don’t have it as easy as they would have 50 years ago, when harmonies and power-pop chords by bands such as the Who and the Kinks were on the air everywhere. In fact, if you’re a kid growing up now in I.B., they aren’t anywhere.

“There are actually no bands in I.B. It seems people in I.B. are very apathetic to the music scene and to live music in general. I.B. is classic San Diego. I love this place. But people don’t get out of their houses much.”

When they play 21-plus bars, three of them have to wait outside when they aren’t onstage. But the Bassics don’t particularly care to play the all-ages venues. “Soma is usually for the pop-punk or screaming scene.”

So, why are hardcore screamers so popular? “People want to latch on to their own identity, even if it’s cornholey type shit.”

Martinez says the band owes a lot to the support of their friends, especially a neighbor who gave them a place to practice and a manager who has invested in recording time and equipment.

Helping them get their first Casbah gig was a musical soulmate, Manual Scan founder and Reader contributor Bart Mendoza.

“Our friend’s dad said he was really into Manual Scan in the ’80s. He showed us a YouTube video. We all wondered if he was still around. We found out not only was he still around, but he is still in the scene. He dug us.” Vino Martinez wrote a song about the stifling I.B. non-culture called “Everyday Life.” “When you’re angry everything comes out good,” says brother Sam.

The Bassics appear February 2 and February 3 at the Casbah.

I like what the Bassics are doing, hope they keep it goin! As far as (Mod) music goes in IB, The Trebels started around the late 70's and played well into the 80's (even opening up for Chuck Berry). They played everything from The Who to the Small Faces, The Downliners Sect, originals, R&B, and did it WELL. Members went on to form The Hoods, The Evil Eyes, The Imperial Beats, The Loons, Phantoms, and The Hi-Tones (with Action Andy). The New Breed (named after The Jam's "Dig The New Breed" lp) comprised of Mar Vista kids (& one National City kid) who played original Power-Pop & Garage through the late 80's and the early 90's, skinny ties and all. 70's era Funk-Rock group "Last Chance" was responsible for the Imperial Beach anthem "IB Cruisin," blasted from every smoky car window west of I-5, down Palm Avenue, then sizzled into the sand & sloughs~