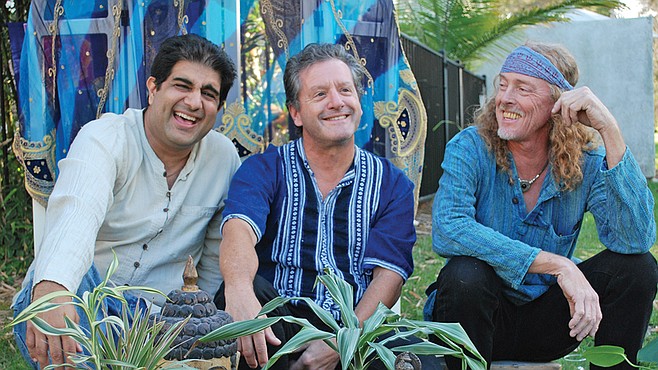 Removal of Obstacles is “my journey, of fleeing a land ripped apart by turmoil and political and social revolution"

“I remember the music of my homeland, where I had just started playing violin at age four when my family became exiles and left Iran,” says Bahman Sarram, aka Bviolin, who spent much of his life living in Philadelphia before relocating to San Diego in 2000.

That story is partially told in an upcoming EP from Sarram and his Mystic Groove Collective, pairing him with Reverend Stickman (guitars, bass, vocals) and world percussionist-vocalist Dan Ochipinti (Joseph Angelastro Trio, Sounds Perfect). “Removal of Obstacles is about my journey, of fleeing a land ripped apart by turmoil and political and social revolution, marked by chapters of triumph, wrapped in the ultimate story of love and unity,” says Sarram.

“This EP is in a way itself very much the conclusion to the story of the first two CDs [How This Weighs on Me and Stretch Reach]. Those first albums were semi-autobiographical, about the turmoil and challenges in my journey. Not that both albums were dark in nature, but there were definitely aspects that represented the not-so-happy times. This EP represents where I and the band are today, namely joyful.”

Apropos of the subject matter, the EP debuts at the Vision Center for Spiritual Living on October 20. “We will be presenting a story that represents a personal journey via music itself,” says Sarram. “This is in a full size theater at the church that sits 200, [with] stage lights, sound, media…I don’t think anyone is doing any theater like this, in this way. This is an interactive show, very much a story told through music, so there is the play aspect mixed in with the music, a mix between musical theater and a concert where the audience will be very much part of the show.”

“It is absolutely the brand new direction of music and the way it is presented that we have taken on the last couple years, this being the culmination of that evolution.” In addition, “This is my band’s 15th year together, and this show represents the premiere of our new path in music, not only in the music itself, but how we present it to an audience.”

Asked to describe his music, Sarram has characterized it as Middle Eastern-influenced jazz fusion and folk. “Whenever there are any Iranians in the crowd, they seem attracted right away to my style of violin...I get a lot of compliments about how great it is to hear the Persian influence in a broad range of styles of my music.”

He says that political tensions between the U.S. and the Middle East rarely have any bearing on his performances, and he can’t recall ever being singled out for harassment over being Iranian, at least not in a concert setting. “I tend to remember those that are generous enough to come up to musicians and say how much they enjoyed the concert or show. Those things are the things that stick in my head.”