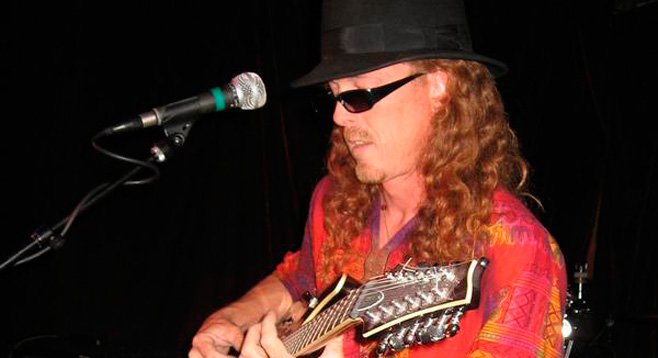 Sound description: Alternative rock with a twist of the blues.

“I play alternative folk rock, with a twist of the blues,” says San Diego singer-songwriter Reverend Stickman. “The music is a guitar-driven and an unconventional fusion of Americana and alternative. Most of my songs are stories from some place or time in my life. I’ve never been much for writing love songs. Not with two ex-wives.”

“When my second ex-wife split and left me with a considerable debt...that was tough, paying for someone else’s mistakes, but in the eyes of the law I was responsible. Things financially are much better now, and maybe I’m a little wiser, too.”

Not that he has anything against the institution of marriage, as evidenced by his side occupation. “I’m an actual reverend, with the credentials to perform marriage ceremonies and legal unions. What’s more, everyone I’ve joined together in marriage is still together. I’d love to be a part of more happy weddings. That’s even more rewarding than happy gigs, at least spiritually.”

Half Alive: Stories From Under the Black Hat ties into a stage show called The Reverending Story, a collection of songs, videos, skits, and other surprises designed to explain the strange workings in the past lives of Reverend Stickman.

“The idea behind the production came from the fact that my songs are generally stories from some place or time in my life. I’ve never been much for writing love songs, but I do have some wild tales to tell during the show.”

The multimedia production includes film footage, spoken-word skits, dancing (“of a sort”), and several guest performers, including a choir.

As for the accompanying nine-song CD, Half Alive: Stories from Under the Black Hat, “We actually cut 13 songs in a six-hour studio session,” says the folk-blues rocker. “The concept behind the recording was to lay down the basic tracks — bass, drums, and guitar — live in the studio and then add vocals and solos via multitracking. ‘Half Alive’ stems from the fact that it was recorded that way.”

Produced by Sven-Erik Seaholm at Kitch ’n Sync Studios and mastered by Paul Abbott at Zen Mastering, the CD features a full band, with Stickman covering 6- and 12-string acoustic and electric guitars, slide guitar, and lead and backing vocals.

So, how did the Reverend attain his ministerial credentials? It all started with two friends who wanted him to officiate their marriage. “After quite a bit of preparation — i.e., writing a money order — and profound thought — i.e., drinking — I became a mail-order reverend. I can marry, baptize, and perform legal unions, but I do not preach, and I’m not affiliated with any single religious belief. All faiths and denominations are honored, even if not always understood.

“Spirituality is something we can all feel.... Religion divides us from each other.”

He won Humphrey’s songwriting competition on May 14, 2011, taking home a Dean acoustic/electric guitar valued at $379.00, a full day recording session at Signature Sound, a photoshoot by Steve Covault Photography, a CD cover design and logo by Beach City Graphics, and a trophy, as well as airplay on KPRI 102.1 FM San Diego and free membership to the San Diego Songwriters Guild.

Later in 2011, his group landed a weekly Saturday night residency as the house band for the Valencia Resort in downtown La Jolla. Early the following year, he began recording a full-length with co-producer Bob Bartosik on the SDJazz label. Says the right Reverend, “This album moves in the blues/jazz direction, while remaining true to Reverend Stickman’s eclectic roots.”

His 2014 album More Than Blues features Stickman backed by Neener (aka singer Jenene lambert) and the SD Jazz Situation.

“One of my best gigs was while touring in Florida with Charlie Imes, with whom I just recorded and released an acoustic EP titled Summer Days. We were in a tiny place called Cedar Key playing at a great place right on the water. The people there were so kind to us and actually listened to the music. Then a couple days later, the whole crowd of them jumped in cars and drove over two hours each way just to attend our next gig. Awesome!”

“One of the worst was really just funny, not too awful. We were playing for a convention of psychiatric professionals and though we were on a large stage in a beautiful banquet room, it was the strangest thing ever. We performed behind a closed curtain! We could hear them out there talking and eating dinner while we played on.”

In Autumn 2016, "I am heading into Berkeley Sound to record a new acoustic EP," reported the Reverend.

By early 2020, he'd embarked on an ambitious new project. "I’ve been spending much of my creative time working with Bahman Violin and Dan Ochipinti on a brand new original musical theater production, Refugee Songs, after we received a grant from UCSD," he said. "In addition to recording a soundtrack EP for the show with Mystic Groove Collective, I’m also working in the studio again with my friend and co-producer Bob Bartosik...I recently bought an electric sitar/guitar which I have been exploring. I am now ready to gig with the Mystic Groove Collective, Sita Rose and TJ Moss, Ari Marsh, and others who appreciate the exotic sound it creates."