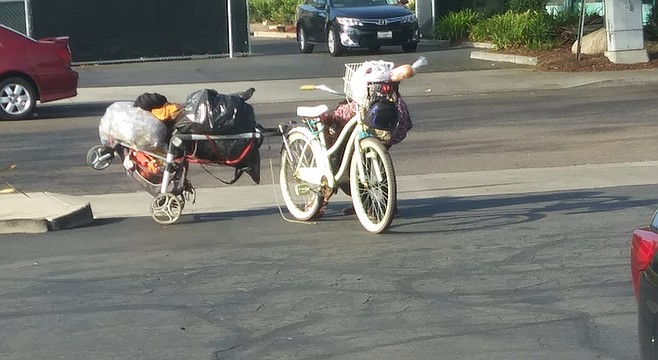 “Brother Benno’s has got to go,” says an irate businessperson in the Oceanside Industrial Park about how the visitors to a not-for-profit support center has impacted her business. “I don’t have a barber pole because of them. There was a man sleeping in front of my door the other day….When he left, there was a puddle of piss.”

A different business owner who agreed to speak on the record agrees that Brother Benno’s, while its intentions are good, has had a bad effect on adjacent businesses.

“It’s just the fact that it’s unsightly to have drug addicts wandering around outside your store looking like a zombie invasion,” says Jesse O’Hara who just bought a building across the street from Brother Benno’s to house his parts company called Pure Turbo. “Sometimes these people will walk into my office and demand things. They might be outside completely out of their mind yelling things or are being combative. I had a gentleman sit in front of my door with his shopping cart full and a baseball bat in his lap.”

“It is a crisis,” says Oceanside City Councilman Jerry Kern about the impact the homeless are having on area businesses. At the last city council meeting, October 17, Kern stated that the wheels are turning for the city to review Brother Benno’s conditional use permit which allows the non-profit named after a Benedictine monk to continue operating at 3260 Production Avenue.

Oceanside city manager Michelle Skaggs Lawrence confirms that due to complaints from several nearby business owners, the city will be reviewing Brother Benno’s permit which allows it serve hot meals to homeless six days a week. It provides clothing, housing assistance, health referrals and a 12-step housing program that helps 40 people at a time. Brother Benno’s has not faced a challenge to its permit since it moved to the San Luis Rey Valley 25 year ago. Ten years prior to that, it was based in downtown Oceanside.

“Some believe that Brother Benno’s is an attractive nuisance,’” explains Skaggs Lawrence. “Others firmly believe that that they are providing a necessary service.”

I got up early to serve Brother Benno’s clients on Tuesday, October 23. About 210 people showed up to get breakfast at 6:30. About ten other volunteers were in line, giving out fruit, French toast, gallons of milk and boxes of pastries, cupcakes and cookies donated by local supermarkets. Local churches, businesses and service clubs like Rotary sign up to serve once every other month or so. Most of clients were appreciative, respectful and clean. The line included children, handicapped, and seniors. A handful were disheveled and surly. All were hungry. After breakfast the clients are given the opportunity to shower.

Before the doors open, the in-house crew wearing Brother Benno’s shirts were fed. Brother Benno’s executive director Dennis Martinek says this crew includes 25 men and 15 women who are enrolled in the Brother Benno’s 26-week recovery program that admits people looking for recovery and a chance to get off the streets. In exchange for working at the Brother Benno’s center five mornings a week, they get to live in one of seven recovery houses during the program. He says the program has a 60-70 percent success rate of getting people off the street and into a job and home. “If a person fails a random drug or alcohol test they must leave,” he says.

Martinek says that like the Brother Benno’s center in the industrial park, all seven residential homes are owned by Brother Benno’s. He says each home houses up to six people. The current ado concerns the main Brother Benno's center and not the seven houses.

But the fact is, bad apples are abetting the blight. “There is another lady down here who is known for waving down people and then jumping into their cars,” says O’Hara of Pure Turbos. “The majority of the business owners have had it.” He says one of his tenants in the building he owns may just up and leave. “The Subie Shop [Subaru repair] is talking about leaving because of Brother Benno’s…When I bought this building I wondered if I was making the right decision because I was right across the street from Brother Benno’s. It is really affecting our property values.”

But O'Harra admits that there are currently few vacancies. “The park has pretty much been full since the economy turned around.”

So what happens if the city of Oceanside closes Brother Bennos after 35 years?

“Oceanside will have poor families who do not receive assistance, and homeless people who are hungry, dirty and desperate will have no help,” says Martinek who says Brother Benno’s does all its works without government assistance.

“It would be a disaster,” says Stanley, 47, a Brother Benno’s client. “There would be nowhere to go. There are a lot of people who are here who do not do drugs.”

Councilman Kern says he thinks the answer may lie with the new conditional use permit mandating Brother Benno’s hiring 24-hour security guards to get the homeless not to stick around the park.

“That is a good idea,” says Jimmy Saco, owner of the Z Market. Saco says he has mixed feelings since he knows Brother Benno’s is doing good things, but that the homeless are hurting his business which includes a deli. “I have wanted to put tables and chairs outside but I can’t do it the way it is now. Maybe if they have security who do a good job, I can do it.”

According to city manager Skaggs Lawrence, there are 483 homeless in Oceanside at last count. The homeless problem in the Oceanside Industrial Park is impacted by being next to the San Luis Rey River bed, home to homeless encampments.

Besides these "business owners" over-exaggerating, The mass majority of the people that go to Brother Bennos are not homeless. Its mostly poor families trying to get a bit of food assistance due the Oceanside trying to price-out the poor with all this needless new building they've been doing for almost 20 years. Its too the point where people can barely afford to eat, because most of their money is going into rent. And rent prices now are close to being mortgages.

And for people worried about "property value," all you are doing is economically kicking your base out. And if the base cant afford to spend, YOU can't afford to stay in business.

I've been in Oceanside since the early 80s. And in my time here, this industrial business district is not the talk of the town like Coast Hwy. Its not like its plotted by the Regal theater. If they want security to help police the riff raffs trying to ruin it for everybody, then that business district (Brother Bennos included) should collectively foot the bill of hiring a 24hr security patrol company like any other business does. They aren't special.

Okay if it's a few bad apples, then they should be able to get rid of them. So don't they?

At a meeting in city council chambers Wednesday night led by the Chief of Police, the manager of the Oceanside Industrial Park said the park itself employs a security conpany part time. But according to some of the businesses I spoke with, the service is doing nothing to help them with their homeless issues.

Private security is nothing more than window dressing. They have no authority than an the average citizen. Their purpose is to provide a false sense of security. Most are paid minimum wage with their employer making most of the money. Just what would anyone expect a low wage no/low benefit unarmed worker to do when confronted with a problem? They may "scare off" some dirt bag but any bag guy with more than a single digit IQ knows that these security guards have no power. (Note: Armed security is a slightly different story but cost a lot more than window dressing)

It is presumed a security guard who keeps track of loiterers and who logs behavior and then threatens to call police over numerous violations would have an effect. It is good that people who minimalize this into "scare off dirtbags" would never be put in charge.