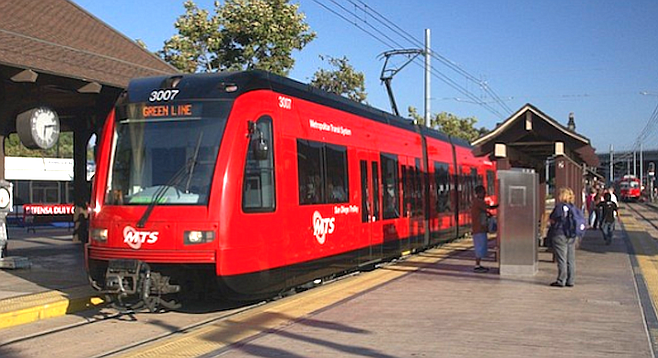 How many trolley riders will end up buying fares?

On Oct. 2, a Tuesday, everyone could board public transit and go all over the region – how about El Cajon to San Marcos and back? – for nothing; yes, no fare, no tickets, no questions, free of charge. It was the first Free Ride Day in San Diego County ever. Families were out. At Old Town, a mom and dad pointed across the trolley tracks at a beast in teal and blue that had just roared in, the bells and whistles sounding. “See,” the mom said to her two wide-eyed young sons. “That's the Coaster.” Speaking of which, the Coaster – a train from Santa Fe Depot downtown to Oceanside and back – could be ridden free, too, along with the North County Transit District's Sprinter, an east-west run between Oceanside and Escondido, and the network of teal and blue buses called the Breeze.

The North County district reported that some 7,850 riders boarded the Coaster on Free Ride Day, a spike of nearly 70 percent compared to the same first Tuesday in October a year ago. In San Diego, the Metropolitan Transit System counted about 59,000 more riders than last year, a total of 368,000 or 17 percent more than before. The Green Line proved most popular as it transported some 46,500 riders, 37 percent more than a year ago.

So one might expect to see an unusually large crowd on the platforms at the 12th and Imperial transit hub and not be surprised by a festive air among some of them. Waiting for the 9 pm Blue Line Trolley, for example, a crowd of 20-somethings shared laughs over their free day's journey into evening on the region's public transportation system. One man said he was lucky to have heard about Free Ride Day because he otherwise would have plunked down five bucks for a day pass. And those who had put 30 days' worth of rides on their Compass Cards with hard cash this month? Hey, shouldn't they get credit for an extra day...having already paid?

And so it was that when the Blue Line to San Ysidro pulled into 12th and Imperial a few minutes after its scheduled 9 pm arrival, festiveness filled the air. Then an inordinate number of riders scurried out of the last two cars and, for reasons not immediately apparent, hustled into the two front cars. The laughs turned to anxious looks as more and more riders re-packed themselves into the front two cars. They stood four or five deep in the aisles in a tight clusters, some of them new to the system and lured aboard by the freebies. One young man surveyed the situation and decided there was no way he could squeeze in. He ran back to the third car, examined the array of empty seats, got on, but was told no. The two rear cars were about to be uncoupled from the rest, and that's why all the passengers had to leave.

One woman was sitting on the bench for bus number 929 heading for the Iris Avenue Trolley stop and transit center. She'd been seconds late for the run that left precisely on time at 9:04 pm, while the passengers who'd not opted out of the train ride continued to make shuffling steps back from the doors so the trip could at last get under way. Asked about it, MTS spokesman Rob Schupp said half the cars are usually uncoupled when the 9 pm Blue Line south arrives at the 12th and Imperial hub. “It is standard operating procedure for normal days,” he wrote in an email. “But probably should not have happened if there were big passenger loads.”

So typical of MTS . No announcements on the platforms and over crowding trains every night as they remove cars from service after "Rush Hour" - which is 6:00 p.m. I see it regularly where everyone is herded off the car to be unloaded by rude MTS station folks and smashed into already crowded cars.

MTS service is focused on Rude. Ride regularly as I do (daily) and you will be stopped by MTS Police and they will demand to see your fare card. Often 2 or 3 times on my trip in from El Cajon on the Orange line. But enforce rules or help people - that is NOT their job and they will tell you so - only fare enforcement.

If MTS really wants the elite to use their Trolley they need to learn about Customer Service. I know they can do it because they are not nearly as aggressive on the Green Line...just orange and blue where the poor folks ride.

MTS police are cop wannabe's who have been given a little authority and never miss a chance to exercise it.