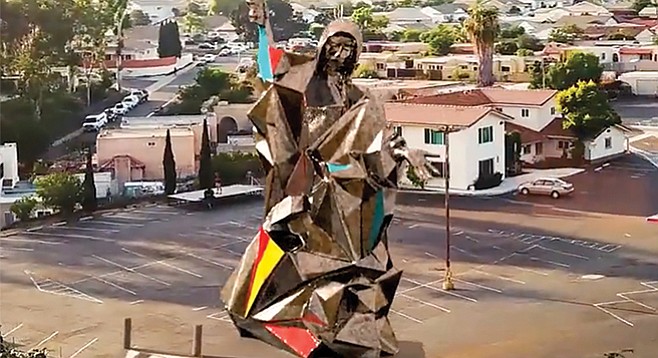 Beacon or distraction? “The fundraising campaign at welcomethestranger.us claims that the monument will serve ‘as a beacon of welcome,’” says Border Patrol Investigator Travis Wahl. “But after consulting with several art critics, we’ve determined that the statue’s jagged steel construction and inhuman formlessness are designed to make viewers avert their eyes rather than stare in longing wonder. That has us thinking that it’s true purpose is to divert attention from whatever is going on at the site. At this point, we suspect that the people behind this statue, which sits on the grounds of a Catholic Church, intend to create a cross-border tunnel that ends in the hollow pedestal below the statue, and is designed to welcome illegal border-crossers before giving them sanctuary inside the church. It’s a smart move, but really, they overplayed their hand.”