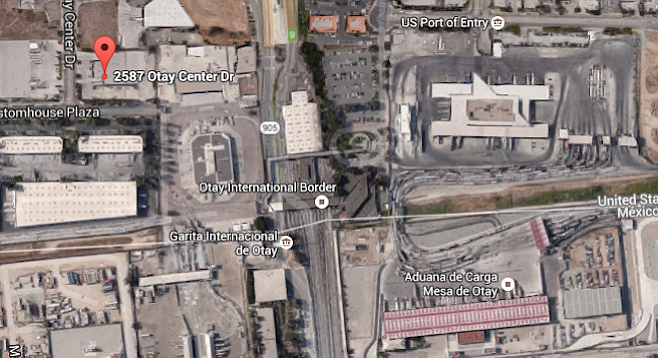 Federal officials last night (October 21) seized control of a cross-border super tunnel running from a Tijuana warehouse to the Otay Center Warehouse at 2587 Otay Center Drive. Twenty-two people were arrested in San Diego and Tijuana and 12 tons of marijuana were confiscated.

It is considered one of the largest tunnels uncovered in recent years. The tunnel is about eight football fields in length and is believed to be equipped with a rail system, lighting, and electricity.

The tunnel was discovered after six months of investigation by a task force made up of personnel from Homeland Security, the Drug Enforcement Administration. and the United States Border Patrol.

Eight football fields long could mean 8 X 100 yards, equaling 800 yards, or if you include the end zones, that would add 20% to the distance, and be 960 yards. In either case, you're talking about something close to or exceeding a half mile. That's a lot of tunnel and mucho dirt to get rid of. I'd think there must be an easier way to smuggle contraband across the border. And it was nervy of the perps to do it just a golf drive away from the official Otay border crossing.

With all the legal loopholes for growing weed in the US, and the massive amount coming out of Humboldt County in California, we should wonder why there's so much coming in from the south. Must be a lotta' folks toking on the stuff to make it worthwhile to expend such effort to get it into our country.

Visduh: In any case, once other states realize how marijuana legalization has boosted tax revenues in Colorado and Washington, and also boosted the economies, other states will quickly move to legalize pot. Oregon and Alaska have followed suit.

That's what happened with both state lotteries and casinos. As soon as it became obvious how much money would roll in, the movement to legalize gambling gained momentum. Best, Don Bauder

Law enforcement should be allowed to sell their catch to legal pot outlets. It would be a nice boost to their budget, and may give taxpayers a break. Why burn it in a huge polluting bonfire when it can be recycled and burned in tiny servings to help me manage my glaucoma?

swell: There are complications to such a proposal, but it may work after the kinks are ironed out. In states where marijuana is legal, growing the stuff is enormously profitable. Growers would fight the importation of it from states that have seized it, I would guess.

If governments would sell the illegal stash to locations where pot is still illegal, those governments would be wide open to criticism and lawsuits. Also, smuggled marijuana is probably not up to the quality standards of states in which it is legal. Best, Don Bauder

8 football fields? Why didn't you give us the weight of pot measured in cheerleaders?

CaptainObvious: The reason is that many cheerleaders are lithe and slender. That's what permits them to do the contortions they do. So there would have to be a lot of cheerleaders to use as a weight measuring metric. Best, Don Bauder

interesting, with all the tek ( discriminating seismic intrusion detection systems) in the military inventory, and they don't stop the tunnels while they are being constructed.

and, why not follow the drugs to their distribution points and make some real arrests, not just the mokes that are the little guys ?

Murphyjunk: Yes, the officials had the tunnel under surveillance for six months while it was being built. I don't know why officials waited to pounce until it was completed. Best, Don Bauder

I'm unaware of any such tunnels that were dug from north to south. Somehow you have to get rid of, or hide, a huge amount of soil (i.e. dirt). Plenty of people south of the border had to know that tunneling was going on. Digging is noisy, and even if you have a warehouse large enough to hold all the dirt, you can't disguise construction of something like the tunnel they now have under control. People in Baja knew what was going on, yet nothing was done there until it was completed. Fishy, fishy, fishy.

Visduh: Do you expect people in Mexico to blow the whistle? To whom? The drug cartels have such power there that no one would dare report that a tunnel was being dug. Best, Don Bauder