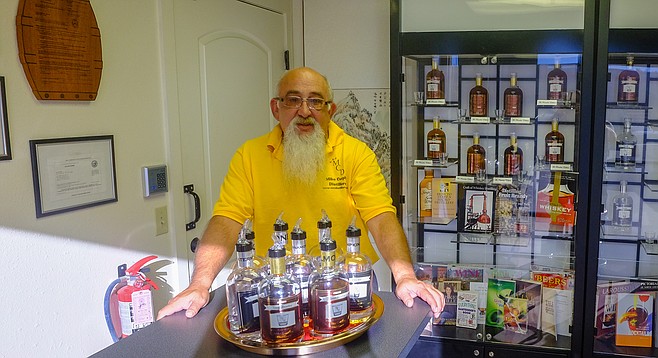 The water of life flows in Spring Valley

It’s tough to think of a peeted single malt whiskey as moonshine, especially from a recipe as old as any laws in this country. But for decades, that’s technically what Mike Curphy had been making. “I’ve been doing this over 40 years,” notes the lifelong distiller, “just not always on the legal side.”

Curphy credits an innocuous run-in with law enforcement for scaring him straight. Several years back, a San Diego Police Department cruiser rear-ended his car. As all the police officers in the vicinity gathered at the scene to collectively needle their colleague for the accident, Curphy stood by, fearing the damaged trunk of his car might pop open, revealing bottles of his unsanctioned whiskey within.

So the aerospace industry vet cashed out a 401(k), secured a warehouse space in Spring Valley, and effective last April, operates with a license to make and sell whiskey as Mike Curphy Distillery (2731 Via Orange Way, Suite 104, Spring Valley). He had the license printed on a barrel-shaped wood plaque, which hangs in his tasting room.

His flagship product bears the name Uisge-Beatha, a Gaelic term that literally translates to “water of life.” Correctly pronounced “ooshky bayha,” when pronounced with an accent, it’s easy to see how that “ooshky” evolved into a more familiar word: whiskey.

Curphy grew up in Michigan, but says his Uisge-Beatha recipe originated on the Isle of Man. It’s been in his family for 240 years, passed down by his grandfather during a school break when he was 15. “Best summer of my life, I’ll tell you that,” Curphy, now 61, recalls. “He showed me everything he knew through that summer, and then he passed away in the fall.” The knowledge his grandfather imparted included malting the barley, and smoking it with peat moss which Curphy continues to do. “I’m the eighth generation that’s made this family recipe,” he explains.

Made on the Isle of Man, it might be called scotch. In Spring Valley, it receives a single malt whiskey designation. As Curphy tells it, the term Uisge-Beatha originally applied to honeyed scotch, so he offers a variant flavored with local honey, plus a second flavored with almonds.

Curphy malts his own corn for a second line of products, dubbed PD-101. Technically an American Whiskey, this clear liquor is what we more commonly think of as moonshine. Curphy has taken to releasing seasonal flavors of this spirit, including watermelon, mango, apple-cinnamon, and pumpkin spice.

Open on weekends, the Mike Curphy tasting room resides in the same industrial park as fellow whiskey producers Liberty Call Distilling and San Diego Distillery, creating a sort of Spring Valley whiskey trail. That’s currently the best place to find Curphy products, though they will slowly begin to appear in local bars and retailers as the one man distilling operation ramps up his now very legal business.

Curphy’s got another reason for going legit. “I’m hoping my grandson one day is going to take enough interest in this to relieve grandpa,” he explains, “and carry on the family tradition.” By then, Curphy should be offering some well-aged Uisge-Beahta: his grandson is only six.