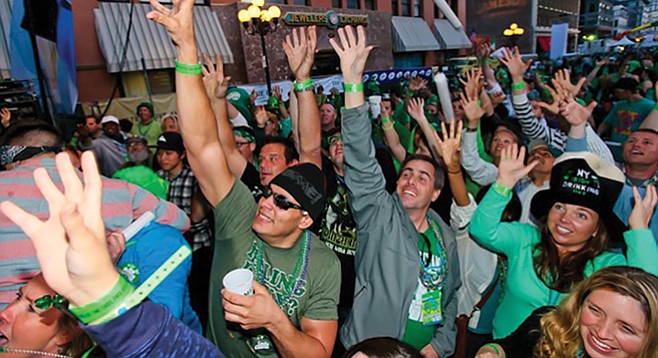 Just another night in Gaslamp

Last Thursday (3/22/18), a few days after St. Patrick's Day, a worker at a cigar bar on Fifth Avenue confirmed a report that an incoherent reveler had wobbled in waving an open bottle of champagne. He was asked to leave, which he did, but not before grabbing a tip jar and making a run for it.

Minutes later, around the corner on Fourth Avenue across from the Horton Grand Theatre, a man was down on the sidewalk, handcuffed, surrounded by police. Pedestrians nearby saw the headlights of two bicycles at the scene and surmised that a bicycle thief had been caught...and a second one must have gotten away. Turns out, though, both bikes were San Diego police vehicles, sturdy models called Volcanics.

“Do what you want with me,” the suspect on the ground said to the police. “I don't care.” A bicycle thief? No, the patrol sergeant at the scene, told me. They say this guy stole a tip jar. The tender at the bar (Cesar's), who asked that neither she nor the establishment be identified, reported that the tip jar, a plastic bottle, had been recovered intact, Not only that, the tips were still in it. About how much, she was asked. “Not much,” she said.

Back on Fifth a short time later, a man in a huge, green, Cat-in-the-Hat chapeau stood in the street in handcuffs, a police officer's arm grasping him just above the elbow. They seemed to be chatting amiably while a cadre of officers were figuring out what to do with a woman who was oozing over the curb onto the street, motionless. “Drunk in public,” said an onlooker.

A male officer approached her and was going through the right-hand pocket of her jeans, startling her. “Why are you touching me?” she remonstrated. The officer rapidly withdrew the hand and told her, “I'm trying to find an I.D. What's your name?”

She said nothing. He asked again, a few times. Still no answer. Then he went for the purse she was clutching by a strap. They struggled over it and he won. Later, it was returned to her.

A woman in plain clothes, presumably a police officer, meanwhile joined the scene and coaxed the woman to get up off the curb. With little help from the people stationed on her left and right, she stood up straight, briskly, and didn't appear all that drunk to those nearby. The woman and the presumed policewoman walked off in the direction of the bay. Then, the handcuffed man in the over-sized, emerald, Doctor Seussical, St. Patrick's Day hat, who'd been watching it all as he chatted with his captor, was led to the back of a truck and told to step in.

What is long and green and has an ass on each end? A St. Patrick's Day Parade

And then these buffoon millennials whine because they can’t get a good paying job or buy a home. Well if you didn’t waste your money on tattoos, pink hair, vaping, smoking pot, leasing cars, watching Netflix 8 hours a day, waxing your pussy and drinking every weekend you might have the pennies and credit worthiness to own a real asset.