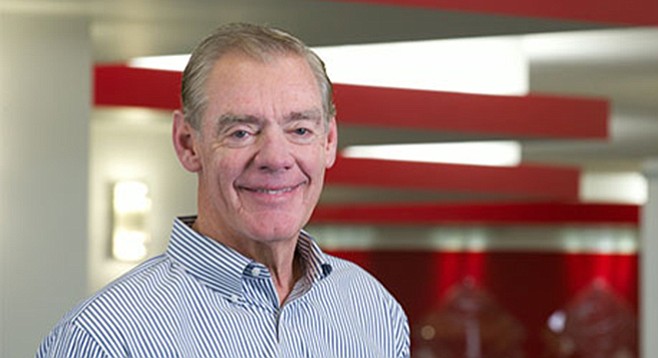 California politicos insist that nominations to state boards and commissions aren’t dependent on the generousness of campaign contributions, but the experience of Jack McGrory, just named to the board of the state university system by Democratic governor Jerry Brown, may test that truism, critics say. The controversial ex-San Diego city manager grew super-rich after departing city hall to sign up to work for La Jolla mega-millionaire Sol Price, and later, Padres owner John Moores.

While at the city, McGrory carried water for Republican mayor Susan Golding, whose grandiose 1996 GOP convention plans, and Chargers stadium expansion required deft budgetary shape-shifting. “Golding ordered Jack McGrory to figure out how to pay for it all…no one quite understood how he did it, and that was his secret,” wrote Roger Lowenstein, author of 2008’s While America Aged: How Pension Debts Ruined General Motors, Stopped the NYC Subways, Bankrupted San Diego, and Loom as the Next Financial Crisis. “Council members complained they didn’t understand his machinations… but the truth is they were happier not knowing what McGrory was up to.”

Lately, McGrory has been leading the campaign to convince city voters to turn over control of the Mission Valley venue formerly known as Qualcomm Stadium to San Diego State University for academic and commercial development. Skeptics have questioned the motive in raising more than $1.5 million, most of it from wealthy university alumni, per latest disclosure filings. How McGrory balances his theoretically non-partisan role as a state university trustee against his local political maneuvers remains to be seen. But quick confirmation by the state Senate is regarded as a slam dunk in light of his previous campaign contributions, including a total of $8500 to Democratic Senate leader Toni Atkins.

Asked by Union-Tribune columnist Logan Jenkins whether he had done any lobbying for his new position, McGrory responded, “I mentioned it to Toni a year ago.” In all, McGrory has personally produced $46,945 in state political money since 2001, most of it for Democrats, including Assembly members Todd Gloria, Shirley Weber and Lorena Gonzalez. An outlier was Republican Shirley Horton’s unsuccessful race for the Board of Equalization in 2014, to which he gave $6800. The former city manager has played even more significant stakes at San Diego’s city hall, where he and Allyson McGrory have kicked in a total of $136,257 since 2013, including $105,000 to SDSU’s Mission Valley land transfer effort. Last June, federal disclosure records show, McGrory gave ex-Navy SEAL and Democrat Josh Butner $3000 for his House race against Republican incumbent Duncan Hunter.

If SDSU wins the Qualcomm site to develop, it will be entirely to McGrory's credit. He is a tough adversary for the SoccerCity folks to compete with -- all that charm and fund of knowledge about where the bodies are buried. And now he is another crony-appointment by Governor Brown. And who is Allyson? Presumably the newest wife.