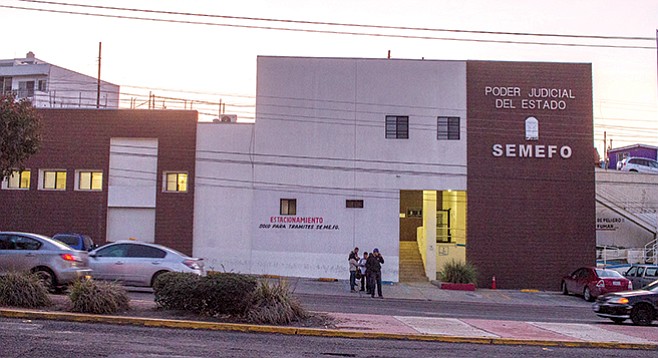 45 days to claim a corpse, but the state of emergency reduced it to 15 days 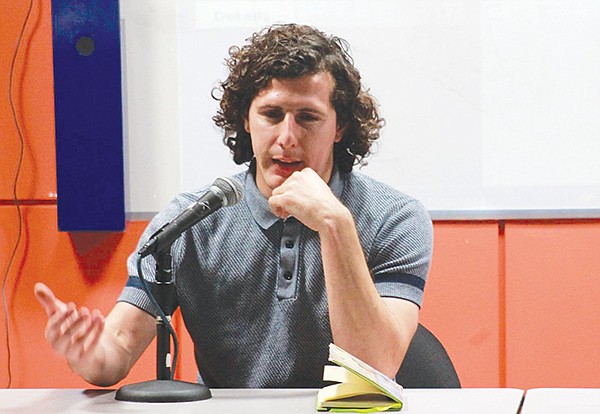 Diego Silverio: "It is unbearable when I go by there."

Colonia Juárez, where the morgue is located, is at the end of Avenida Revolución, up the hill and behind the Torre de Agua Caliente on Boulevard Fundadores. Neighboring downtown Tijuana and nearby major intersections, La Juárez is a nifty precinct offering middle-class housing, offices, several restaurants, flower shops, ballet school, and Cervecería Tijuana (the city’s oldest craft brewery).

And the morgue, surrounded by funeral homes and crematoriums.

Walking up the hill on a mid-afternoon, the first smell I encountered was the baking dough from Mamma Mia Pizza. As I approached the morgue the pizza smell fainted and there it was, the smell of death. It reminded me of the smell of my unplugged refrigerator when I returned to my apartment after leaving for two weeks.

At the morgue, confused families crowd the stairs asking for information from an uninterested guard and an empty help window. Some sob while others console, and a few others stand outside shaking smoking cigarettes near a sign that reads “Peligro: Área de No Fumar.” Many of them cover their noses and mouths because of the smell.

“Everything was awful, starting with the unbearable smell and finishing with the bad administration,” comments America Osuna about her experience at the morgue. “I was there to identify and claim my brother’s corpse. I was there for more than 20 hours!”

The state’s morgue, better known by its initials Semefo (Servicio Médico Forense), has been under scrutiny by the press and Profepa (Mexico’s version of the Environmental Protection Agency). The complaints by citizens and neighbors of the smell emitted from the morgue caused an investigation.

Profepa’s report from December 8th found the irregular handling of and lack of proper storage for hazardous biological material. A water tank for five thousand liters situated outside under the parking lot stored blood and other fluids without refrigeration Toxic garbage not labeled or disposed of properly, and several other infractions, were discovered.

“They took too long, because there are no employees,” continues Osuna. “I didn’t see cadavers, but I often heard how they would yell: ‘Traigo uno mas, llegaron dos.’” (I’m bringing one more, two more arrived).

“It turns out that when they told us of my brother’s passing, his body was already in [the morgue]. We went and it was already closed. They open from 8 a.m. and close at 7 p.m.”

Osuna’s brother died of an overdose late at night. She did not disclose his name.

“We get there the next morning and they tell me that I have to write myself on the list. That’s when I started waiting. Three hours later, it was my turn. The person attending told me that I had to bring his birth certificate and credencial de elector and two family witnesses.”

The morgue received around 3200 cadavers in 2017, nearly half of them were homicide victims. Dr. Raúl González Vaca, who oversees the morgue, admitted that there were more cadavers that the facility could handle and the overload caused some of the storage for 120 corpses to malfunction.

“I get all the documentation and the other witness and I am thinking this will speed up the process. But they told me to sign up on the list again. Again, you could hear people bringing in corpses and people talking about how bad it smells. Talking to the guard of the place, he told me they get around 20 corpses daily, and that now they only give five days to claim a body and if not, they go to the fosa común” — the common grave.

In 2017, 833 unclaimed corpses were sent to the common grave. The morgue gave a 45-day period to claim a corpse, but the state of emergency reduced it to 15 days and many times, less than that.

“Well, four more hours went by with documentation in hand and the other witness, and the guard came out and says: ‘Señores, buenas noches, we’re closing now. Come back tomorrow at 8 a.m. Everyone there was shocked and really mad. We were there since 8 a.m. and the guard just says again: ‘Aquí se cierra a las 7 p.m. y se abre a las 8 a.m.’” — it closes at 7 p.m., opens at 8 a.m.

“We return again the next morning at 8 a.m. and sign up on the same list. Again, three more hours and it was our turn. From the moment they open, there are approximately 60 people waiting for information about their families… crying, angry, and yelling because no one gives any information.

“Our turn comes up and they receive us. They ask the name of my brother, they show us pictures, and when we identify it, they sent us to the Ministerio for the signature so we can get my brother’s body.”

To claim a corpse after identifying it, one must present documents from Semefo to the Ministerio Público (District Attorney).

“We go to the Ministerio with all the papers for them to sign, they make us wait there for two hours, and it turns out the papers didn’t have the cause of death. We start calling Semefo and wait to get an answer. But how are they going to attend the phone if they only have one person attending the front window? And I only saw like three other employees in the whole building? Who is going to answer the phone and give information?”

The Ministerio Público is located one mile away from Semefo.

“After two more hours in the Ministerio, we got the signature they [Semefo] requested, with all the funeral services ready, all we needed to get was the body. They told us, you have to come with all funeral arrangements so you can take him. We get there with the hearse waiting outside, and they told us that we have to sign up in the same list again. We were like, ‘Seriously?! We did all the paperwork.’

“More hours go by and in the meantime, more corpses arrive, more people crying, asking for their family members, some, just like us, with all the paperwork ready and hearses waiting outside. Crying and fighting. Another four hours or more go by. We got there at 3 p.m. with everything ready and they never let us through, because we weren’t next on the list. At 7 p.m. and the guard comes out and says, “Señores, this is closed. Come back tomorrow.

“We saw this coming, and the three families that have been there for two days with all the paperwork and the hearse outside, we got together and said: ‘No, señor! We are not leaving this place until they give us our family member, and you have to give him now. And if you don’t we are calling a television station or a newsman. And that’s when a man dressed in black with a tag that read Ministerial Semefo showed up, and we told him our case.

“This is after everyone had left the area, except the three families that were claiming bodies and had everything ready and we were all angry and sad. The man in black said, don’t worry, you guys will get the bodies today, this is not fair and I’ll take care of it. And he did. But it was until 10 p.m. that they finally gave us the body. After waiting for so long.

“As we were leaving the place, people were still arriving anguished and crying asking for their family members. The guard would only to say, ‘Esta cerrado, regrese mañana’” — It’s closed, come back tomorrow. “That was my first experience at Semefo and it was a nightmare, the installations, the employees, the service, their schedule, everything. You get there uncertain, sad, full of pain, and then they make you wait for 20 hours and endure that smell and the horrible service.”