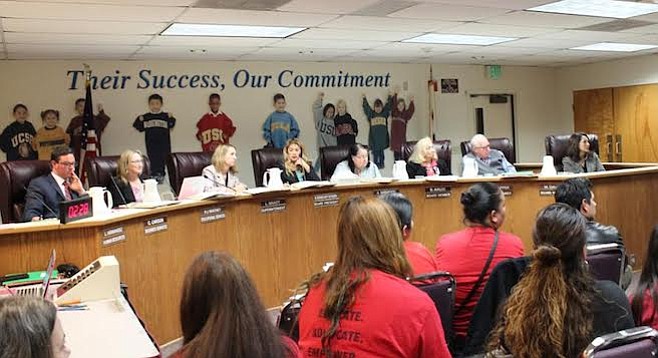 “Your educators are falling apart,” Christina Benson, president of the National City Education Teachers Association, told district boardmembers this week. The union continues to protest an impasse in negotiations between the district and teachers. 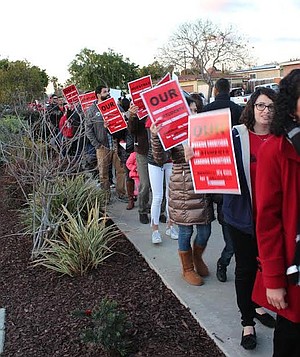 Outside district offices on February 28

On Wednesday, February 28, over 250 teachers, parents, and students rallied outside the National School District offices chanting and holding signs along the sidewalk. Once the board meeting began, they filled up seats, aisles, and hallways.

Teachers maintain that there has been a budget surplus for the past four years, but the district refuses to spend the money even though teachers have no curriculum for their students.

At the board meeting, assistant superintendent of business services Christopher Carson gave a presentation on the state of the economy in which he presented a different perspective: “There’s some economic factors that are potentially pointing to an economic downturn,” he said.

One example, he said, was that gross domestic product of the United States has been dropping, which indicates a slowing of the economy. Other factors included the possible renegotiation of North American Free Trade Agreement and the new tax plan. For the National School District, however, Carson explained that new  Local Control and Accountability Plan (LCAP) funding means revenues are projected to increase by about $3 million within the next year. 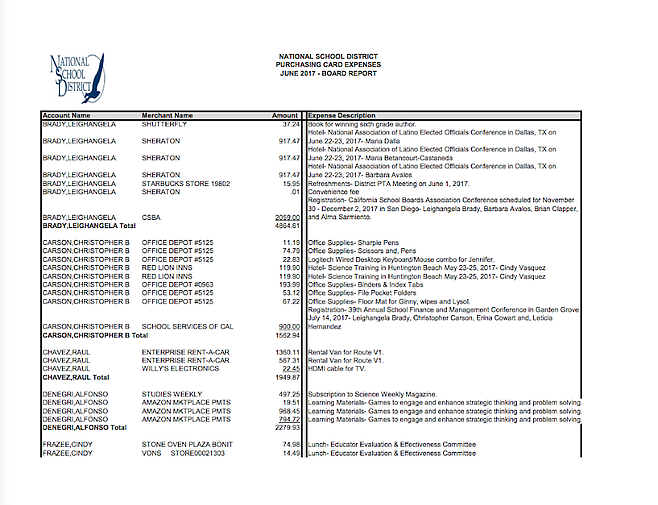 “What you’ll see is an increase in our total revenues,” Carson admitted.

During the protest rally, teachers argued that the state only requires districts to keep 2 percent in reserves, but Carson disputed the claim in his presentation. “When looking at the 2015–’16 year, we had 17 percent reserve. The statewide average for an elementary-school district in 2015–’16, which is the last year the data is available, was 21.54 percent. So, the district is 4½ percent lower than the state average.”

In addition, Carson disputed the claim made in a Reader article that stated the district had $10.5 million in books and supplies. Carson said, “When looking at our adopted budget in 2016–2017, it was actually $5 million.” 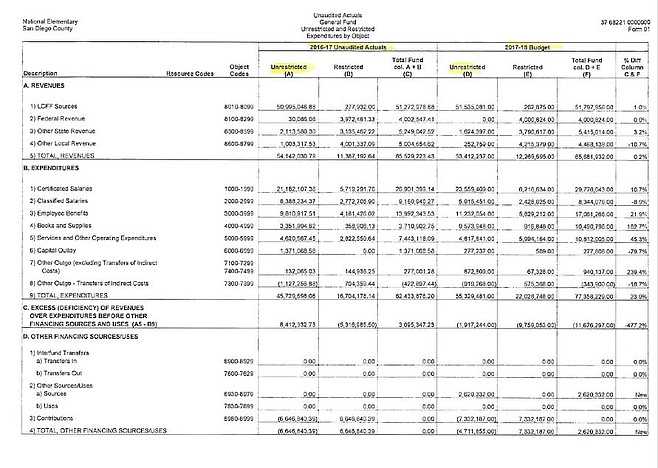 Carson explained to boardmembers that caution in spending was needed because “when thinking about the ending balance, you need to think about it as your bank account. If I ask you for a dollar out of your bank account today, can you then spend that dollar tomorrow as well? Once you’ve spent it, it’s gone.”

A public records request showed that Carson and fellow assistant superintendent Paula Jameson-Whitney receive salaries of $157,330 as well as a mileage stipend totaling $3300 annually. Superintendent Leighangela Brady, who lives in Clairemont and was hired in October 2016, receives a salary of $200,349.

Furthermore, purchasing-card expenses available at the district website showed that when boardmembers Maria Dalla, Maria Betancourt-Castaneda, and Barbara Avalos attended a National Association of Latino Elected Officials Conference in Dallas, Texas, they stayed at the Sheraton Hotel for a total of $917.47 per room. 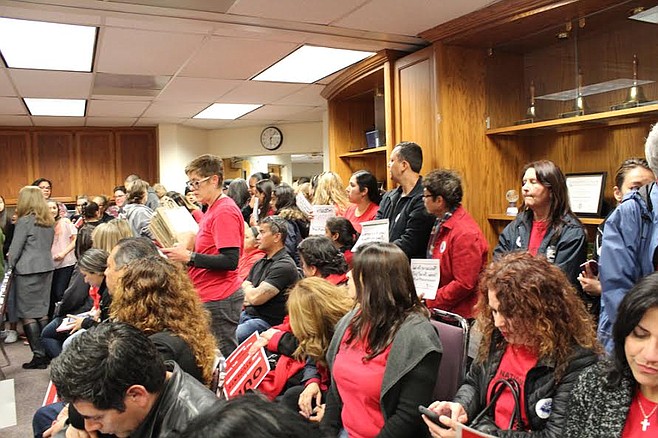 Speakers at the meeting described a district in crisis

Meanwhile, teachers said repeatedly that they had to pay for curriculum materials out of their own pockets. During public comments at the board meeting, one teacher explained, “In first grade we have not had phonic curriculum to teach our students how to read. So, we used to have the green workbooks and then all of a sudden they said, ‘No they’re not aligned with Common Core.’ Okay, so what did we do? We bought curriculum out of our pockets or created worksheets.”

Another teacher said, “I just wanted to let the boardmembers know that my students don’t have science books that are aligned with [Next Generation Science Standards]… The NGSS standards have been around for five years now. I don’t have a book to teach science.”

Countless public speakers — both at the podium and in interviews — described a district in crisis: low teacher wages, promises of raises that never came, a dramatic increase in teacher workload, a lack of counselors, no designated homeless liaison, and volunteer parents paying for student supplies.

The National School District has about 5900 students at ten schools (K–6), a charter and a pre-school. According to the California Department of Education, 57.3 percent are English learners. In addition, state figures for 2017 show that 33.11 percent of students did not meet the English language arts standards and 34.67 percent did not meet the mathematics standards. Furthermore, San Diego County’s annual homeless education data for 2015–2016 revealed that 991 students in the National School District are classified as homeless.

In one interview, Molly Sterner, a third-grade teacher at Rancho de la Nación School, said, “These kids are coming with so many challenges. We need support services for our families. We need counseling and therapy for our kids. These kids are dealing with immigration issues. Some of them are living in their cars. I have a kid who is falling apart because his dad was picked up by ICE in June. We’re not identifying and supporting those kids.”

Sounds like way too much traveling and fancy restaurant meals by those board members. They should pay back the money, or resign.

I'm more troubled by the inflated salaries and benefits of the education administrators. They'll get a fat retirement too.

Every time the teachers get a raise in wages and/or benefits the useless overpaid administrators feed at the trough only at a much higher dollar amount.

Interesting story. Basic cash and bank deposit handling procedures are designed to prevent just this sort of thing. So, the "business" office of the district was so inept that they now have missing funds, and can't be sure how much is missing. I'd say she's in serious trouble. But the business manager of the district was incompetent, and should be replaced, pronto.

How credible are the claims made by Carson? It sounds as if the missing funds situation happened on his watch. There are Kool-Aid stands that are better managed than some of these school districts.

This sounds a lot like this story from another South Bay school district: http://www.kpbs.org/news/2015/sep/02/investigations-continue-san-ysidro-schools-financi/

Thankfully we have investigative reporters like Barbara Zaragoza looking into this. People of National City shouldn't have to fight to have tax dollars spent on their children. The money was already sent to the district... why isn't it showing up as budgeted.

Totall unbelieveable. This should be front page everywhere. Incredible financial mis- and NON- management, board members dropping OVER $900/room/night for conference hotels, a board member who “doesn’t remember” how much cash she “pays back” with unproduced receipts, AND the lowest paid teachers in South Bay with NO curriculum?! The state needs to step in and clean house down here. Hopefully the NCPD and the reporters are just getting started and are motivated to see this through to empty out all the bad apples and get these teachers and KIDS what they need and deserve.