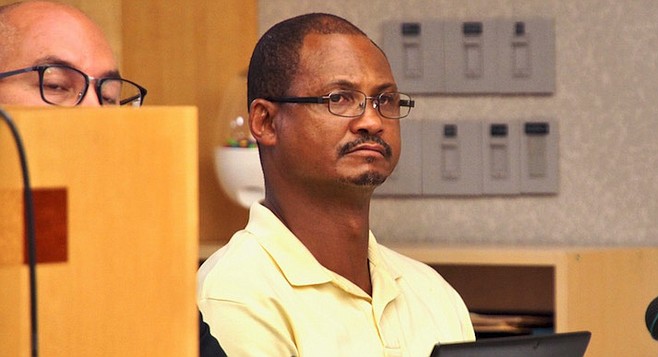 Currently out on bail

A man standing in the parking lot of a busy Oceanside hotel on a Friday afternoon was actually a felon in possession of a 9mm Ruger handgun, according to testimony today, Thursday June 21, 2018.

Oceanside police officer Paul Caporaso said he approached a man suspected of being a felon with outstanding warrant at the Ramada Inn at 1440 Mission Avenue after 1 p.m. on March 2, 2018.

The suspect confirmed his identity was Kimbra Kelley, according to the officer’s testimony. Kelley admitted knowing there was a current warrant out for him, the cop said.

The cop said he looked into the black computer case that belonged to the man, and found a handgun and ammunition. The cop said the case also contained six cell phones and a WeighMax scale and a glass pipe commonly used to smoke meth. It was unclear if the cop found any computer in the case, he could not recall when asked today, more than three months later.

Officer Caporaso said he found another glass meth pipe on the suspect’s person, it was wrapped in paper towels and secured with a rubber band.

Prosecutor Joshua Brisbane claimed that Kelley has two prior felony convictions for meth sales, those from 2014; plus two current misdemeanor drug cases; plus the newest offenses alleged today.

Defendant Kelley is currently at liberty on bond.

So what is the point of this article? Is it to point out that another black man is going to jail? Or that the criminal is black? Or that he pleaded not guilty? (Often a person will plead not guilty and then his/her lawyer starts the plea agreement negotiation process) Other than reporting that a felon was arrested on several charges including an outstanding warrant I am not clear why this shows up anywhere than on a police blotter.

Kimbra Lynn Kelley is next due in court on July 18, 2018, to set a date for trial. Honorable judge William Wood ordered him to face two felony charges, felon in possession of firearm and felon in possession of ammunition, plus one misdemeanor charge of possession of drug paraphernalia. This case reminds us how sad it is when someone becomes an addict. And it is concerning when a repeat offender is at liberty on bond and is then allegedly found armed, in a public place. 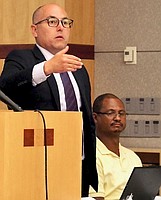 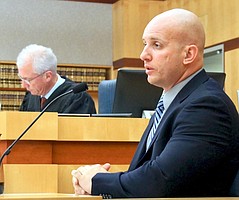