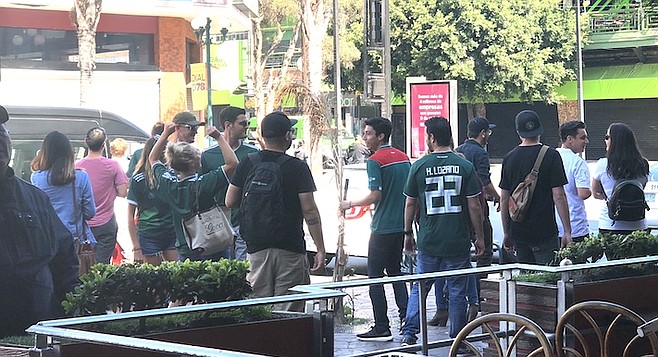 “Estoy muy triste,” said my friend Joey in his poor Spanish after Mexico got eliminated from the World Cup. Joey (with his date) drove at dawn from Little Italy to downtown Tijuana to live the atmosphere of a 7:00 a.m. round of 16 World Cup match of Mexico against Brazil. Joey was planning to skip work to join the crazy celebrations that happen in the city after a victory by El Tri. 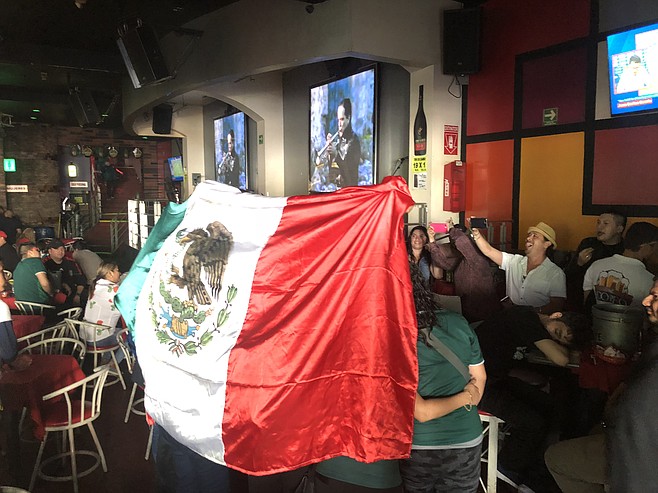 The city celebrated as if Mexico had won.

Four years ago, after Mexico’s win versus Croatia, fans climbed the statue of Cuauhtemoc in Zona Río, leading to a man falling 12 feet from the statue’s shield.

The 2018 World Cup has had a fair share of drama in Tijuana. After the victory against Germany, a video went viral of a Mexican fan that stole a German flag from a tourist and lit it on fire. Korean Barber, a trendy barber shop in Colonia La Postal, posted a video showing that their shop got “egged” after the Mexican victory over the South Korean squad on the second game. 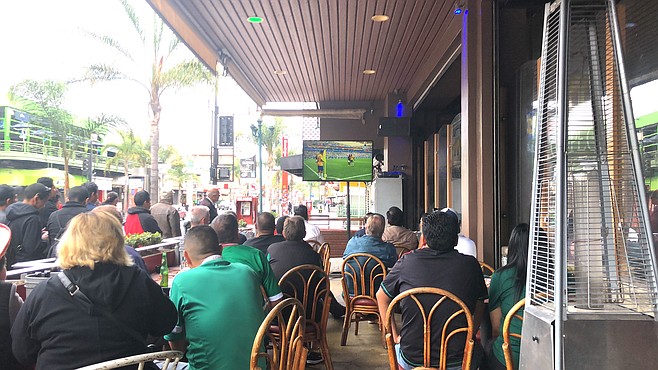 Korean Barber, a trendy barber shop in Colonia La Postal, got “egged” after the Mexican victory over the South Korean squad.

Mexico lost the third game 3-0 against Sweden but made it through the next round thanks to South Korea’s victory over Germany. The city celebrated as if Mexico had won and thanked South Koreans living in the city, hoisting them on their shoulders, raising the South Korean flag, eating kimchi, and sharing an abundance of memes in social media. 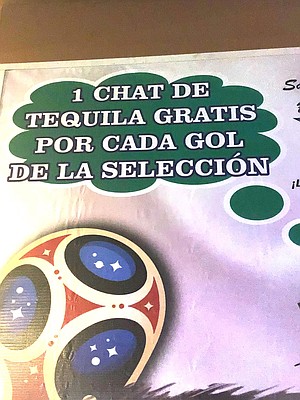 Salon de Baile La Estrella put posters up claiming to give free chat of tequila if Mexico scored a goal.

The only bar in Avenida Revolución that had plenty of action for the early morning games was El Copeo. There were over a hundred people inside the bar and a couple dozen watching from the sidewalk on Monday morning. There was a cover charge of 50 pesos ($3 USD), but beers inside were going for 15 pesos (less than a $1). I caught up with Joey who was watching the game near the entrance on the last table available.

Salon de Baile La Estrella put posters up claiming to give free chat of tequila if Mexico scored a goal. The bar was not open that morning.

It was dead silent in El Copeo as Neymar pushed the first goal against Mexico on the fifth minute of the second half. A collective sad gasp was heard as Roberto Firmino scored the second goal near the end of the match marking Mexico’s demise. It was the end of El Tri in the 2018 World Cup, eliminated on the round of 16 for the seventh time in a row.

Joey decided to go back to San Diego and not skip work. As people started leaving the bar with gloomy faces, I noticed that Joey was not the only one crossing the border solely to watch a 7 a.m. game at a Tijuana bar. I counted at least 50 Americans who were in the bar, including one who was wearing a Twins baseball Jersey, but the majority sported the green Mexican jersey.

I stayed in El Copeo to watch the following match between Belgium and Japan enjoying cheap, early beers. More than half the people left the bar after the defeat, but many early party-goers stayed behind, decided to ignore the loss, and celebrated as if Mexico had won. People danced while chanting “Mexico,” blew on vuvuzelas, and sprayed beer all over the place. The drunken “Mexico” cheers turned into “AMLO” cheers, the celebration turned political over the Mexican president-elect Andrés Manuel López Obrador known as AMLO.

Some drunken arguments about what went wrong in the soccer match escalated to minor brawls, but security was quick to kick people out. Other people got tossed out for puking in the premises and some others passed out on their tables.

All of that happened before the clock hit noon on a Monday morning.

The ancient Romans gave the people gladiator fights ("bread and circuses") to keep them entertained and distracted so they wouldn't notice the corruption of their rulers, and poor living conditions. Today we have football, basketball and soccer, and cheap tacos and booze..

These so called sports do a good job ( abet recently fifl corruption) of hiding their own corruption with distraction .

Yes, like the organized crime connection to some NFL team ownership.