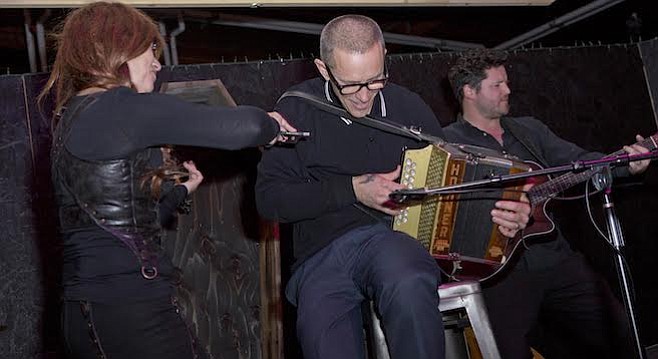 Practice sessions for Flogging Molly’s Matt Hensley used to be a pain. He’s been in North County for decades. The other six Celtic punkers lived in greater L.A.

Lately it’s gotten a lot harder for the pro skater–turned–accordion player. “I’m the only guy in the band who lives in California now,” says Hensley. “The singer and fiddle player live in Ireland. The bassist and mandolin player in Colorado, and the drummer in Detroit.”

Yet the Flogging Molly lineup somehow works, Hensley says. “We’ve had only two [member] changes in 26 years.... But it does get hard to work on new material.”

They leave this week for a five-week tour of Europe with Dropkick Murphys. “We had four [European tours] last year. We’re always on the road. That’s why it took so long to get the last record out.”

It’s been almost five years since Hensley sold his own venue, Hensley’s Flying Elephant (now the Stag & Lion), which was near his Carlsbad home. He liked the fact he could walk to his own bar where he could present his favorite artists like Exene and members of the Pogues. But after six years he admits bar ownership was like “walking on grenades.” He says playing in a world-famous band and being responsible for keeping a bar/restaurant/venue afloat was not for him. “It left a horrible taste in my mouth for a while.”

But last Wednesday (January 17th) Hensley had a full-circle moment: he played a local bar he had an ownership stake in and he didn’t have to worry about paying the bills or broken tap handles. Along with Tony Hawk, Hensley has become a minority owner of Black Plague Brewing, located in the Tri-City area of Oceanside that started hosting live music last summer. Hensley played with Brogue Wave, his San Diego–based Irish music side project that, compared to Flogging Molly, is more trad and less thrash.

“Now I have a place I can go locally and just play music,” he says. “The only hesitation I had was the name Black Plague. It seemed like it had a negative connotation. But look at Death Wish Coffee: it’s really good coffee. Black Plague is all about skaters coming together for good beer and music.”