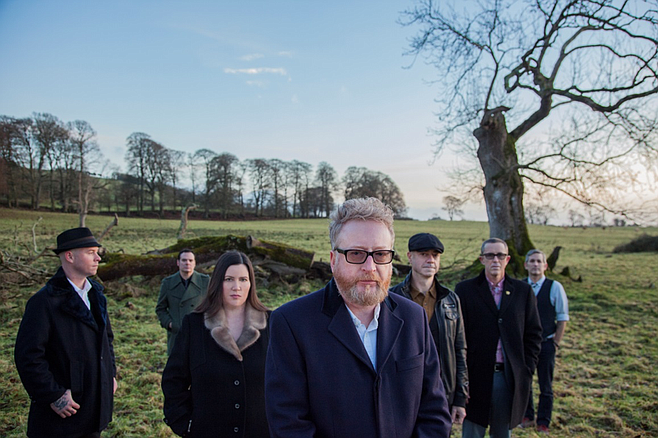 In an interview with Kerrang! magazine, Flogging Molly singer Dave King revealed that the Irish-American punk band's name comes from Molly Malone's, also known as the L.A. tarrier, an Irish pub in L.A. "We used to play there every Monday night and we felt like we were flogging it to death, so we called the band Flogging Molly."

The band started as King played Irish music in bars and pubs. They recruited more members until becoming the seven-person ensemble that they are today. They were signed onto SideOneDummy Records after a show when the record company's owners attended a concert and noted their intensity.

Accordian player Matt Hensley, who didn't pick up his instrument until he was 24, is the only San Diego-based member; the other six members now live in L.A. and elsewhere.

Their music includes many references to the Roman Catholic Church and ranges from boisterous punk rock like the pirate-themed "Salty Dog" and "Seven Deadly Sins," or the defiant "What's Left of the Flag", "With a Wonder and a Wild Desire", "Drunken Lullabies", and "Rebels of the Sacred Heart" to more somber songs like "Far Away Boys", "The Son Never Shines (On Closed Doors)", or "Death Valley Queen". The driving forces behind the music tend to be King's gravelly voice and Regan's manic fiddling.

Afterwards, Dave King retained a record deal with Epic records, and soon began work on a solo album, but when he wanted to pull traditional Irish instruments into the work, the record company resisted. King negotiated out of his record deal to go his own way musically soon after. In the late '90s, he met fiddle player Bridget Regan at Molly Malone's and they began playing together. Soon, the rest of the band came together and soon established a routine of playing. In 1997, they put out their first album, recorded live at Molly Malone's, entitled Alive behind the Green Door.

Drummer George Schwindt's brother Gary became their tour manager after leaving his job working for General Electric. Gary can be heard on the album Swagger playing the trumpet, and is also seen in the documentary DVD Whiskey on a Sunday. Flogging Molly has released four studio albums: Swagger, Drunken Lullabies, Within a Mile of Home, and Whiskey on a Sunday DVD/CD combo, as well as an independent (26f Records) live album titled Alive behind the Green Door. They have toured with the Warped Tour and with Larry Kirwan's American Fléadh Festival, and contributed to the Rock against Bush project. They have become one of the biggest punk concert draws and have sold in excess of a million and a half copies of recorded output as of 12/06/06.

On March 13, 2007, the band released an exclusive EP through iTunes entitled Complete Control Sessions, which includes two new tracks as well as acoustic versions of previously released songs. In an interview with a student reporter for the University of Oklahoma press in Tulsa on March 15th, 2007, Nathen Maxwell confirmed that a new album was being written.

"Yeah, we're working on a new album. We'll play three new songs tonight off of that album, probably. We've been hanging out at where Dave and Bridget live right now, in a village called Blackwater, which is in County Wexford, in the southeast of Ireland. So we've been staying there. We've been renting a cottage next door to their house and a friend of theirs' garage in the village. So we're going into the garage everyday basically, jamming out new ideas and then walking down to the pub afterwards. So we'll do another one of those in June. Then after that we'll be in the studio sometime in the summer and lay those down."

The Flogging Molly song “If I Ever Leave This World Alive” was heard in the 2008 film PS I Love You.

In March 2008, the band’s sixth album, Float, debuted at #4 on Billboard’s Top 200 album chart, selling 48,000 copies in its first week of release. In San Diego, 1000 discs were sold (only Jack Johnson’s new release was in higher demand that week).

The sales success is notable because the Side One Dummy label released the album; independent-label artists (excepting bands such as Radiohead, the Shins, Interpol) don’t usually chart well.

“For so long, people have told us that we were just a novelty,” says Hensley. “They didn’t give us any credit. They told our manager that what we did [Irish rock] was completely not viable.”

Their seventh annual Green 17 tour concluded on April 15, 2011, at the Coachella Music Festival.
For the annual Record Store Day on April 16, the band released a limited edition 7” single “Don’t Shut ‘Em Down.”

Their album, Speed of Darkness, was released in May 2011 on their newly founded Borstal Beat Records. That year, the band did five different European tours, as well as a 20-date tour of Canada. Says Matt Hensley, “It was our first arena tour. We opened for Rise Against. It was our first tour as opening band. Normally we play for between 300 and 2000 people, as headliners. But on this tour [as an opener], it was, like, 10,000 to 20,000 a night. This was great: we played 45 minutes and were done by 9.”

They spent November and half of December 2011 on their fifth European tour of a year which also saw them touring Canada as the opening act for Rise Against.

The Green 17 Tour was born in 2004 as a countdown to St. Patrick’s Day with a performance and celebration in each city leading to the holiday. Their 8th Annual Green 17 Tour began in Detroit, MI on February 17, 2012, ending March 17 (St. Patrick’s Day) in Phoenix, AZ, including a March 6 stop at House of Blues San Diego.

A red vinyl 7-inch dropped on Record Store Day 2012 (April 21) with an unreleased version of “Drunken Lullabies” mixed by engineer Steve Albini and an unreleased acoustic version of “A Prayer For Me in Silence,” limited to 2,000 copies (SideOneDummy Records).

Also in 2012, the band recorded a rollicking rendition of Bob Dylan’s “The Times Are a-Changin’” for the album Chimes Of Freedom: The Songs Of Bob Dylan, celebrating Amnesty International’s 50th Anniversary. The relevance of “The Times Are a-Changin’” around the time of its original release in 1965, could not be overstated. That relevance still holds true today, and the band says they felt compelled to record it.

They opened for ZZ Top at the House of Blues 20th Anniversary party on December 4, 2012, at the HOB venue on the Sunset Strip in L.A. The 9th Annual Green 17 Tour, a rolling countdown to St. Patrick’s Day, began January 24, 2013 in Grand Rapids, MI and wrapped up March 17 (St. Patrick’s Day) in Phoenix, AZ, with a San Diego date on March 7 at House of Blues.

Their 10th Annual Green 17 Tour ran for 27 dates, kicking off in Atlanta on February 15, 2014 followed by stops in New York, Boston, Philadelphia, Chicago, Las Vegas, and New Orleans. That was followed by a tour of the southeast with the Attack and Mephiskapheles, wrapping up April 6 at Will's Pub in Orlando, Florida.

Just in time for St. Patrick's Day 2016, Flogging Molly unveiled their first new song in five years, "The Hand of John L. Sullivan." Recorded with producer Ross Hogarth, the song honors the Irish-American heavyweight boxing champion. "John L Sullivan, was the diamond cut for every poor man's hop," states lead vocalist Dave King. "He was the first true working class hero and to shake the hand of John L Sullivan was the dream that could leave their struggles behind and maybe somehow give them hope."

Their full-length Life Is Good, released in June 2017 via Vanguard Records, was their first studio album in six years. Produced by Grammy Award-winning Joe Chiccarelli (U2, White Stripes, Beck) and recorded in Ireland, preview tracks were offered via Brooklyn Vegan ("Welcome To Adamstown"), Billboard ("The Guns of Jericho"), and Consequence of Sound ("The Days We've Yet To Meet"). They also released lyric videos for "Reptiles (We Woke Up)" and "The Hand of John L. Sullivan."

The initial Life Is Good support tour kicked off May 4, 2017 in Oakland, CA and wrapped up June 4 in Cincinnati, OH. In September, they released an animated music video for "Reptiles (We Woke Up)" directed by the band's longtime friend Richie Smyth (U2, the Verve). They spent October and part of November on their Life Is Good U.S. Tour. Later that year, Matt Hensley became a minority owner of Black Plague Brewing in Oceanside, alongside pro skater Tony Hawk.

As of 2018, with only two membership changes in over a quarter century, Hensley was the only band member still living near San Diego. In fact, “I’m the only guy in the band who lives in California now,” he says. “The singer and fiddle player live in Ireland. The bassist and mandolin player in Colorado, and the drummer in Detroit.”

After Dennis Casey's cracked rib from an overly enthusiastic fan hug healed, a co-headlining tour with Dropkick Murphys kicked off June 1, 2018, at Jacobs Pavilion in Cleveland, OH, and wrapped up June 23 in Gilford, NH.

Social Distortion's 1st co-headlining tour since 1992 brought them and Flogging Molly across North America in Autumn 2019, along with the Devil Makes Three and Le Butcherettes, opening August 13 in Dallas, TX and concluding September 29 in Phoenix, AZ.