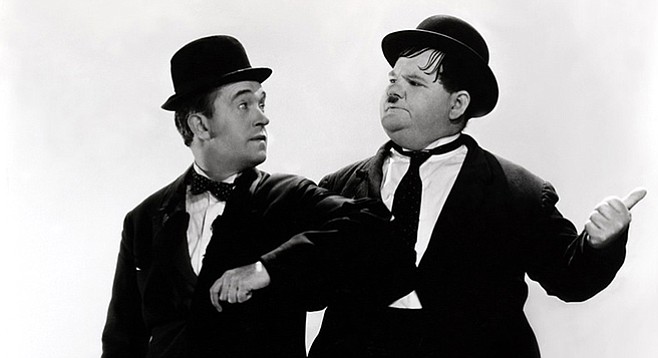 Bring the kids to this riot

The San Diego Chapter of the Laurel and Hardy Fan Club, aka Saps at Sea, opens their 40th season on January 27 with another riotous one-night mini-festival.

“I usually try to make each program a theme,” says John Field, chapter president, festival organizer, and all-around Grand Sheik. “In this case it’s ‘Laurel and Hardy Flirt with Females…and Live to Regret It.’” Field chose a trio of thematically linked shorts — We Faw Down, Mixed Nuts, and Chickens Come Home — all highlighting what happens “when the boys venture outside their marriages and do a little harmless flirting. Needless to say, it backfires hilariously.”

There are also a couple of “surprise” shorts and a Tex Avery cartoon to round out the program.

I must confess to not coming around to the genius of Laurel and Hardy until well into my 40s. A MoPA member left in my care several filing boxes containing VHS copies of every one of the shorts and features the duo had appeared in. For the next however many months, I spent my nights logging at least two shorts or a feature, all in chronological order.

It’s not like the films were out of circulation during my formative years. A local UHF outlet showed a block of Laurel & Hardy shorts every Saturday and Sunday afternoon. It’s just that compared to the Warner Bros. cartoons, Marx Bros. features, and Three Stooges shorts I cut my teeth on, the Laurel and Hardy offerings seemed slow and repetitive, as if each of their shorts were nothing more that two or three gags stretched over a 20-minute period.

How does one chide Stan and Ollie for being repetitive while savoring every Stooge eye-poke and gag rehashed without variation? Let’s say I found room in my heart for all. Who am I kidding? Compared to Moe, Larry, and Curly, Laurel and Hardy stretched gags to the unlimited.

Groucho called Leo McCarey “the only director we ever worked with,” but it didn’t occur to me until much later in life that the genius who signed Duck Soup was also the man responsible for teaming Stan and Ollie. McCarey spent a good deal of his early years acting as their mentor and guiding light. The silent short We Faw Down, a sterling example of McCarey’s perception of the boys, will be presented with live musical accompaniment by Russ Peck.

Chickens Come Home is not only one of the boys’ funniest shorts, it’s as timely as today’s headlines. “Fertilizer King” Ollie thinks his chances at a mayoral run are destined to fail when former gal pal (Mae Busch in the Stormy Daniels role) shows up with an incriminating photo and blackmail on the brain. Field chose this short “as a great example of the beauty and comedic timing of Thelma Todd as Ollie’s wife.”

Substituting one house of worship for another, Williams Hall at Trinity Presbyterian Church, 3902 Kenwood Drive, will double as the screening venue. The show begins at 6:30 and tickets are $7. And do the world a favor: don’t let your kids be as stupid as I was. Bring them along and give them a headstart on life.

Johnny Carson adored Stan Laurel, and helped him out financially in his late years.