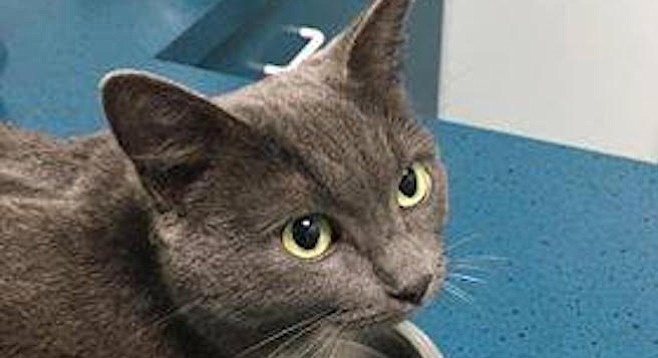 Melaney and her sister heard a cat meowing atop their roof on Saturday, January 6th.

“[My sister] looked up and saw the cat’s head peeking over the ledge.” The gray cat was stuck on the roof of their two-story townhome at 6283 Avenida de las Vistas (near the Mattress Firm Amphitheatre in Otay Mesa). Melaney then called the fire department; they told her they couldn't help and referred her to the county's Animal Services department. They were closed by the time she called. Melaney then checked with her neighbors. No one was missing a cat.

Where Roofus was hanging out

The next day (Sunday, the 7th), “We didn’t see the cat and assumed she got down, but then we heard her again on Monday evening and saw her head poking over the roof again looking down at us and meowing.” She called for assistance again.

"The fire department told me again that they do not help with this type of situation and suggested that I contact Animal Control — which I already had," she said, "and to also contact the district councilmember to inform them that I've been receiving the runaround from everyone."

Melaney said she couldn't find the right phone number to her councilmember’s office (District 8’s David Alvarez) so she sent an email instead, "resulting in a response that they ‘could not help.'"

“[So] I, along with a couple of neighbors tried to use our small ladder to try to get to that cat but [had] no luck. It rained all night and we could barely sleep, worrying about [the cat]."

The next day (Tuesday, the 9th), after the storm had subsided, Animal Services came out but “didn’t have a ladder, so she called out to the cat [and] the cat never appeared or meowed.” On Wednesday morning, the sisters saw the cat peeking over at them, but this time “crying and looking exhausted.”

Melaney then called their homeowners’ association and “the rep informed me that they could not help as they had no one with roof access. The rep said they could call a roofing company but it would be expensive, and that they would not pay for it.”

By day five (Thursday, the 11th), Melaney’s friend suggested a Facebook page called Lost and Found Pets of San Diego and Beyond, created by Sweetwater High School’s Animal C.A.R.E. club to help reunite pets with their owners. “This is when Aurora and Alondra and Animal Rescuers Without Borders contacted me and started asking about the cat. 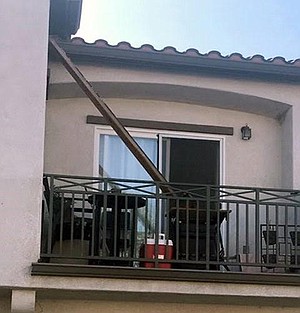 The ramp that drew Roofus down

Alondra Gomez is a veterinarian tech and founder and director of Animal Rescuers Without Borders. Aurora, an assistant to Gomez who manages the Facebook page, said, “It is always perilous with high risks of the cat jumping to its death or an injury while panicked.”

They started the rescue by throwing cat food up on the roof because the homeowners' association was not fully cooperating with them. “It was very difficult [to get to to the cat because] she was on top of a two-story townhome building with no roof access,” Melaney said.

The team had to plan a safe descending route for the cat, which Aurora eventually nicknamed “Roofus.”

On January 12th, Gomez set up a plywood ramp on another neighbor’s balcony. She also lessened Roofus’s food portions tossed on the roof.

“We established a food trail to lure the cat to the trap, which consisted of pieces of rotisserie chicken thrown along the edge of the roof, canned tuna water poured onto the plywood ramp leading from the edge of the roof to the balcony and then canned cat food and water inside the live trap placed on the balcony.”

Roofus remained on the roof Saturday and Sunday (January 13th and 14th) and the anticipation grew for the residents, the rescue team, and some of the 11,000 followers of the Facebook page.

By Monday the 15th, Roofus was still on the roof, but an update was posted on the page that reads in part: “The HOA has contacted us late afternoon and is now fully on-board with the rescue efforts. They are meeting us with their roof maintenance person on site tomorrow morning, with full access to the roof. They also have granted us permission to access whatever part of the exterior building we need to catch the cat.”

On Tuesday morning (January 16), ten days after Melaney and her sister initially heard Roofus’s meows, they got the good news. “One of my neighbors heard the cat in the cage around 5:15 this morning,” she said.

A couple of hours later, their homeowners’ association kept to their word. “By the time the maintenance tech was on the roof,” Aurora said, “the cat was already trapped. Which is a good thing for the cat: chasing a panicked cat at that height to catch it carries risks of jump to their death or severe injuries.”

Aurora said that they rescue an average of about 400 pets a year. She is fostering Roofus for now. “She is a real sweetheart, a cuddle-bug and looks in great shape, too.”