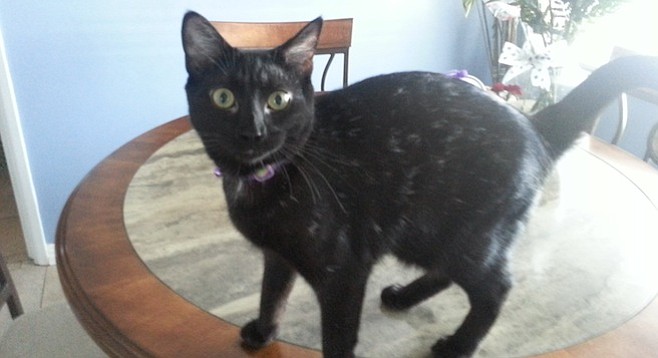 Something feral this way comes

With springtime's approach, the kitties are homeless again

La Mesa resident Tiffany heard the distinctive sounds of cat courtship in January and knew she would again face the issue of feral cats near her home.

"We've been struggling [with it] since we moved here eight years ago," Tiffany said in a February 18 interview. Neighbors told her the previous homeowner trapped the cats, had them spayed or neutered, and then released.

Tiffany (who asked that the Reader not publish her last name) disagrees with that solution. "It's a sensitive issue," she acknowledged. "I'm concerned as a wildlife biologist about the impact on wildlife."

In the past, she trapped the cats. The felines were taken to the El Cajon Animal shelter because the City of La Mesa contracts with the City of El Cajon for shelter services. The issue of cats subsided until last fall when a cat gave birth. Tiffany planned to take the cats to El Cajon but said the $70 fee was much higher than what she paid in the past.

She contacted other organizations and took some cats to the County of San Diego animal shelter. "They saw my address. I don't live in the unincorporated part of La Mesa," and the shelter wasn't supposed to take animals from La Mesa residents. However, the facility accepted the kitten. After Tiffany talked to a supervisor, the administrator agreed to take the mother "just this one time."

The January "mating calls remind me there's an issue here," said Tiffany. She went to the City of La Mesa's February 17 town hall and suggested that the city contract with the county shelter because of the fee charged in El Cajon.

At the town hall, director of finances Sarah Waller-Bullock said La Mesa sets fees on a two-year basis and does a fee study every other year. The next study is scheduled for 2016.

Waller-Bullock said in a February 19 interview that La Mesa has a 100 percent cost-recovery policy. The fee for impounding a stray cat was $70 in 2007–2008 and is $76 through this year. "There's no real easy solution; usually low fees are subsidized," she said. "We do what we can to make it reasonable." 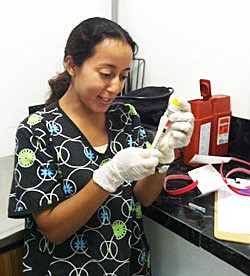 The El Cajon shelter doesn't accept feral cats, said police sergeant Steve Kirk, who manages the shelter and is in charge of animal control and the police canine unit. Kirk said California law allows cats to roam freely. When a cat is brought to the shelter, an initial observation determines whether the cat is feral or a stray that was "roaming around unattended." Feral behavior includes unfriendliness and the refusal to be touched. The shelter refers people with undomesticated cats to the Feral Cat Coalition, which has a trap-neuter-return (to the outdoors) policy.

The El Cajon shelter doesn't euthanize, but the facility has only 30 cat cages. Kirk said the city plans to build a larger shelter.

My search for a picture for this story led to Carol, a Spring Valley resident. Last May, a feral cat gave birth to four kittens next to her house. "I thought I would catch them all and have them neutered/spayed and set loose," she said in a February 18 interview. "Feral Cat Coalition was very helpful. But mama cat moved the kitties, and I didn't see them for two weeks."

Carol found the cats near the Kenwood and Golf avenues intersection in Spring Valley. Some were injured by a vehicle, and the mother and one kitten fled when Carol approached. Another kitten "died on the street." Carol took the other two to her veterinarian. One died there, and Carol adopted the one-and-a half-pound survivor and named her Cleo. The rescued cat now weighs 13 pounds. Carol hasn't seen the mother cat, but Cleo's sibling "comes by every so often."

Ms. Cherkassky, do you even live in the San Diego area?

It matters in that a one size fits all approach by someone who has a predetermined view is not really helpful in the situation reported.

It seems it would be easier to catch a feral cat, fix and let it live wild than it is to be afraid of wild coyotes living in the neighborhood canyons, coming out hunting in the streets, attacking people as they have in Kensington and elsewhere. Seems we are prey to coyotes along with the house cats and unprotected family dogs. Coyotes haven't been considered a threat to humans yet but have you ever heard of "a dingo got my baby"? My 3 cats bring me local mice and rats often so cats are always welcome here. As a kid I brought some feral kittens inside that I found on the side of my house but they were already beyond taming.