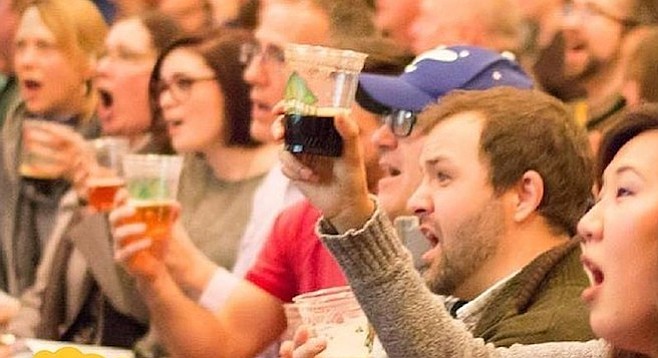 Big, sudsy swell of interest in singing the brews

From Irish pubs to German beer halls, European cultures have a deep history of breaking into song when they drink beer. That hasn't been the case within the American craft-beer movement, but one very loose national organization is trying to change that, and it's made its way to San Diego.

Composer Michael Engelhardt launched the first Beer Choir in St. Louis, Missouri, with a simple concept: people getting together to drink beer and sing. Since its inception in 2015, the concept has gone national so fast, he's reportedly stopped keeping up with new chapters. Currently, dozens — and likely over a hundred — chapters exist in cities across the country, from Seattle to New York to Flagstaff, Arizona.

San Diego's Beer Choir launched in October, with a sing-along event at the ChuckAlek Biergarten in North Park. After a November meeting at AleSmith Brewing in November, it returns to North Park for a third session on January 31st at Mike Hess Brewing.

The local chapter was started by the Choral Consortium of San Diego, an organization that unites more than 50 choir groups around the county to facilitate the scheduling and promotion of choral events.

Consortium president Carol Manifold says Beer Choir sounded like a fun way to promote local singing events to beer fans — though the opposite may also be true. "Personally, I was not a beer drinker," she concedes, "but as I've gotten to visit these places and learn about craft beer, now I get it."

While she estimates most of the 50 people who attended the first two meetings came for the songs, the breweries hosting have enjoyed a boost in sales. "They were absolutely thirsty and it was a great boost for our business," confirms ChuckAlek cofounder Marta Jankowska. "They were a really fun group and it was such a festive occasion."

Each meeting, a designated director leads renditions of songs taken from the "Beer Hymnal" Engelhardt compiled for Beer Choir, which includes ageless drinking classics such as "(What Would You Do with a) Drunken Sailor." The 15-song booklet also includes a version of the Sound of Music tune "Do-Re-Mi," with the altered lyrics referring to beer.

Beer Choir attendees get a beer ticket and "hymnal" for $12, and may also download a copy from the Beer Choir website.

Manifold says some pretty accomplished singers in attendance help keep the group sing-alongs in key, but no one should be deterred by a lack of choral experience. "If they don't have any singing background, that's okay," she stresses, "there's no singing talent required."

Magie Brennan agrees. The beer enthusiast enjoyed singing in choirs growing up in Minneapolis but hadn't had an opportunity since college. She became one of the first to get involved when the local chapter launched, and now manages it.

"Drinking and singing have gone hand-in-hand for centuries, and San Diego is the perfect city for it," Brennan says. "It's such a casual, low-key kind of event…it's meant to be fun and silly."