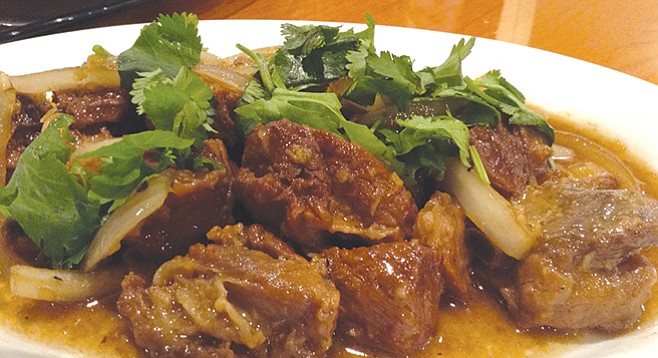 Cháo, one of the great porridges of the world

There ain’t nothin’ in this whole wide world as comforting and warming and tastebud-caressing as Asian porridge. Known as jok in Thailand, baw baw in Cambodia, cháo in Vietnam.

At this very moment, I’m chowing down on cháo, right here in the middle of Little Saigon. 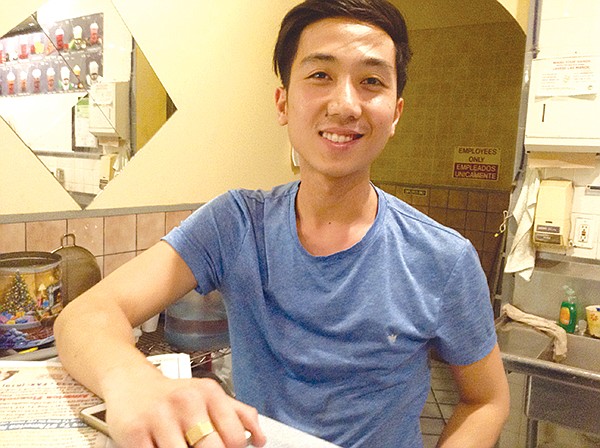 Vinh’s a pretty recent arrival from the Mekong Delta.

I came in dripping from the rain, and I was stuck between bus stops on El Cajon Boulevard up around Euclid as a #215 express took off. Not another for a half hour. Decided to find someplace warm. 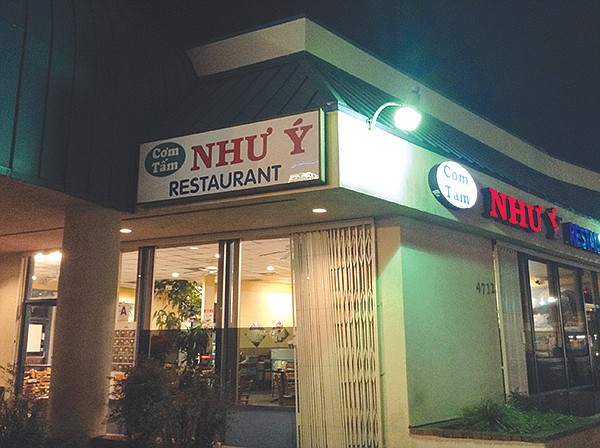 I pass names like Hoai Hue, Da Nang, Pho King, Nha Trang. Mostly in new buildings housing doctors, bookkeepers, and sandwich shops. They’re all signs of the prosperity that three decades of hard work have created since the post-Vietnam boat people started settling back in the ’70s and ’80s. 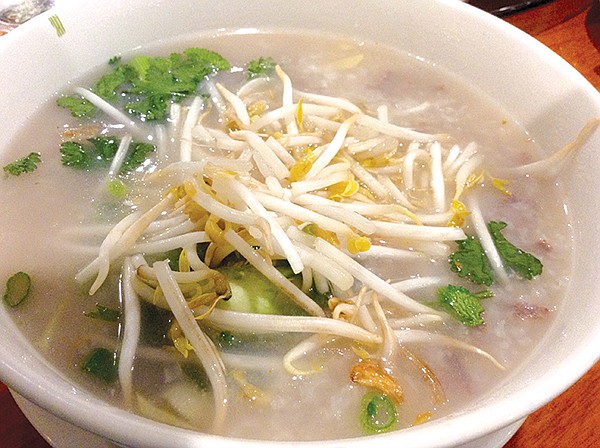 Chao. “We open at seven each morning. That’s when people really love to eat it.”

Two minutes on, I’m getting damp, cold, and miserable when an extra spurt from the rain gods sends me scuttling into this generic corner place. Com Tam Nhu Y. “Com Tam” is about broken rice, a Vietnamese favorite. Nhu Y, not so sure about.

As I come in, one of the Vietnamese crew, Vinh, is winding the wheels of a sugar cane grinder to press a stick of cane. Its juice falls into a jar ($2.25) for another customer.

He hands me a big menu and gestures to the whole restaurant to sit down in. It’s pretty empty, mostly folks sitting at window seats, watching the people outside scatter through the rain. Couple of Asian girls come in. One has a ukulele. She starts plunking and singing, until a waiter waves the two outside. I sit down at a circular table of polished varnished wood, topped by an inner glass spinner surface. You can see these are for big family gatherings. The walls are butter cream and yellow, with murals of, like, Ha Long Bay and other Vietnamese scenes.

“Ah.” He turns the page to a section called “Cháo.”

This is where I learn that “cháo” is “jok” is “congee” is rice soup with different names for different countries. That it’s maybe the most ancient food in China, going back at least to the Yellow Emperor. Here, you can have it with fish, chicken, beef, or a combination. It costs $6.99.

I order the beef version.

Then I start looking over the rest of the menu. And, dang... I’m wanting some of this stuff. Like, braised fish in a clay pot ($8.99). Or suon ram man, braised pork short rib, for $8.99. Or with shrimp, or a shrimp-and-pork combo, $13.99. Or countless other meat-and-veg combos I can’t work out because they’re described in Vietnamese. So, yeah, most of their customers have to be Vietnamese. Good sign.

Anyway, I order the braised pork rib. And when it and the cháo arrive, I ask Vinh which of the bottles of hot sauce I should splot on.

“No,” says Vinh. “These have flavor already. No need to put anything on.”

He says it like, don’t insult the cooks’ work here. They have infused all the flavors you need.

The pork’s good, sweet in a porky way, helped by cilantro and onions, and really tasty with the rice I ask for. But I decide to save most for Carla and me, for brekky tomorrow. Right now, just want to concentrate on the cháo. It’s a little lemony, with scallions and fried onions, and shredded beef in there giving heft and flavor. But tonight, just as when the Yellow Emperor slurped it up 5000 years ago, it’s mainly about the warmth, the gentle flavors, the ease on the digestion, the pleasure of watching the wild weather outside.

In my cháo tonight, there’s no 100-year-old duck’s eggs, or youtiao — fried bread sticks. Probably get that at breakfast time. But that’s it: there’s never just one cháo, even if it does spring from simple roots. It started off as food for hard times, a way of making a rice ration go further. Usually, today in Vietnam, they make it from the broth that a chicken has been boiled in, so you get basic flavor right away.

There’s scallions and fried onions in there, but I do add bean sprouts and a couple of jalapeños to give it a little zap. And as you drink and chew it down, everything gets richer.

“We open at seven each morning,” says Vinh. “That’s when people really love to eat it.”

“But isn’t pho popular, too? Why don’t you have lots of that?”

“Right across the Boulevard is a very famous pho restaurant. Pho Hua. We let them do the pho specialties.”

Vinh’s a pretty recent arrival from the fertile Mekong Delta. He struggles with English, but here, in Little Saigon, that’s not really a problem.

He gets me boxes to pack the leftovers. “So what does ‘Nhu Y’ mean?” I ask a customer who’s waiting for her to-go dish.

I head back out into the rain thinking about, well, porridge. We hardly give it a thought, but this gloopy stuff’s everywhere, sometimes made from grains, sometimes from rice. Easy food on every continent, but more than anywhere else, Asia. Heck, these people at Nhu Y — Wishes Come True Restaurant, right? — may be serving the most-eaten nosh in the world. Quaker Oats ought to look into it.