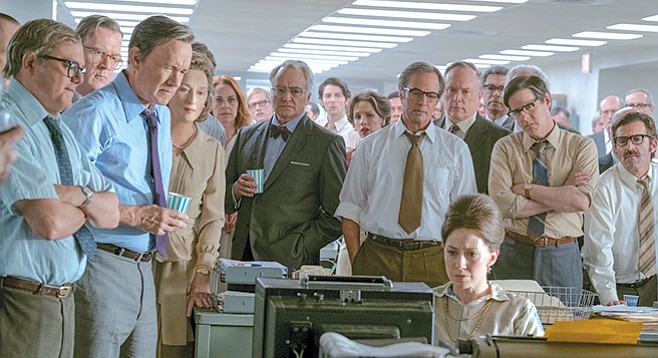 Steven Spielberg never has had much luck when it comes to using movie posters as timestamps. The WWII epic Empire of the Sun takes place after the 1939 release of Gone with the Wind, but the background poster art in the film stems from the 1967 reissue. And his latest, The Post, opens in 1966, yet the walls of the office where Daniel Ellsberg edits what would come to be known as the Pentagon Papers are adorned with one-sheets from two 1968 releases (Planet of the Apes, Joanna) and one, Butch Cassidy, from 1969. 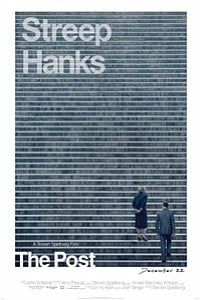 The gaffe heralds an overall tone of laziness in what could be the director’s stagiest work to date. Characters talk at each other across office desks and restaurant dining tables as Janusz Kaminski’s camera lackadaisically encircles them. Inside her living room, Washington Post publisher Kay Graham (Meryl Streep) and daughter Lally (Alison Brie) spend their morning with lamps lit and curtains half-drawn, straining to read the early edition. This is a publisher’s living room, not the Corelone compound!

The filmmakers can’t resist belaboring the topicality. Behind her back, underlings contend the only reason a woman is the boss is because Graham’s husband’s suicide opened up a spot in the family-run business. Womenfolk retreat to the living room on cue while the men remain at the dinner table to talk politics. And while the Trump allusions are inevitable, did novice screenwriters/brick-throwers Liz Hannah and Josh Singer have to include the word “collusion”? Why not tag as “fake news” the injunction sought by the Justice Department against The New York Times?

And not since 1941 has Spielberg slathered on the comic relief with such a leaden hand. Ben Bagdikian (Bob Odenkirk) fumfkies with change at a pay phone. A stammering assignment reporter delivers the incriminating Thom McAn shoe box to Post editor Ben Bradlee (Tom Hanks). Then there’s an insufferable running gag involving Bradlee’s adorable little daughter and a lemonade stand, the awfulness of which stands out almost as much as a colorized red dress in a black-and-white movie.

Still, Streep is superb. What else is new? Oddly enough, her best scene isn’t opposite her illustrious costar. (The generally reliable Hanks yanks at, but can’t quite get a firm grip on, Bradlee’s Boston accent.) Rather, it’s when Graham confronts her longtime friend Robert McNamara (Bruce Greenwood) for saying nothing when his friends sent their children to fight in a war he knew for a fact was unwinnable.

We end at the Watergate Hotel, which makes this a prequel of sorts to Alan J. Pakula’s All the President’s Men, a film Spielberg can only aspire to.